By TIMOTHY COLLINS Jan 28, 2019 | 12:36 PM EST
Stocks quotes in this article: CAT
I don't see the appeal in chasing names that are warnings, missing, or guiding lower in the current market environment. We've had some strong reports early in this earning's reason along with better than expected guidance. I'm more apt to eye those names for a pullback then jump on a name like Caterpillar ( CAT) , today's Stock of the Day.
The company missed earnings per share estimates by a whopping $0.44 when they reported before the open on Monday. That's a nearly 15% shortfall. I will usually dismiss the idea of a miss that is only 1% or 2% from estimates as there's as much art as there is mathematics in parsing together a group of analyst's predictions, but the CAT shortfall is eye-popping. While revenue basically fell in line with expectations, guidance from management is a bit tepid.
Macro concerns, specifically in oil prices, are expected to hit the top line and bottom line with full year earnings per share to fall into the $11.75 to $12.75 range against estimates of $12.64. Management continues to point towards a record bottom line; however, the 20% growth from 2018 doesn't appear in the cards for 2019. In fact, CAT may struggle to see double-digit top or bottom line growth in 2019. If that does occur, then we'll see the PEG ratio shoot from its near 0.50 level closer to 1.0, which will remove it from some value screens.
The company repurchased some $3.8 billion in stock this year with $1.8 billion happening in the fourth quarter. EPS for both the fourth quarter and the full year would have come in lower without the boost. My preference would be for the company to boost the dividend rather than buy back shares. The buyback of $3.8 billion almost doubled the company's $2 billion dividend during 2018. That's more about managing stock price and stock demand rather than benefitting shareholders. Some might argue it benefits shareholders, but a dividend reinvestment plan (DRIP) is simple to set up and has virtually the same effect assuming shareholders want to own more stock. A buyback strips the choice. Unfortunately, the vast majority of the repurchases occurred at or near all-time highs. 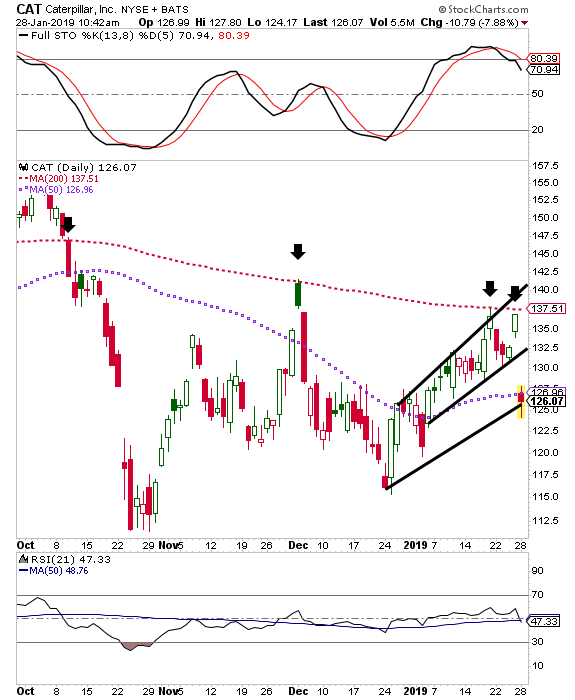 Today's lower open removes the potential strong bullish setup on the daily price action. Shares have struggled with the 200-day simple moving average (SMA) since the October breakdown. Now, we have the illustrious triple-top formed along that SMA. Worse, shares have fallen from the recent bullish channel and triggered secondary indicators to flip bearish. A close under $125 puts CAT on the path to test the December lows. I anticipate a trading range between $120 and $132.50 to form with the lower half of the range being more prominent due to the 50-day simple moving average acting as another point of resistance.
Overall, I believe bears have the upper hand with strong potential to push shares into the 1-teens area. CAT is an avoid for me. Bulls will need help from the overall market, and if that does happen, I anticipate there are dozens of better large cap names to consider for upside potential.
Get an email alert each time I write an article for Real Money. Click the "+Follow" next to my byline to this article.
TAGS: Investing | Stock of the Day