During Thursday night's Mad Money program on CNBC our own Jim Cramer told viewers that picking stocks is about more than just drilling down on a company's fundamentals. It's also about what's hot on Wall Street. One stock that for example is Carvana Co. (CVNA) , a stock that's up 70% so far this year and 160% in the past 12 months.

Cramer said CVNA was flying high going into the fourth quarter last year when, despite posting strong results, the stock sold off hard along with the broad averages. That's because high growth stocks like CVNA are precisely the kind of stocks money managers sell early in a decline. CVNA is a stock that's become detached from its fundamentals, Cramer continued.

The stock spiked 11% in November when it reported those strong results, only to give up those gains the next day. After a bullish analyst day the stock barely moved, while today its gyrations are being driven by short sellers.

Cramer concluded CVNA is simply too hot to own right now, which is why he recommended selling it if you own it. Let's see if the charts suggest the same conclusion.

In this daily bar chart of CVNA, below, we can see a mixed picture with respect to the indicators. CVNA rallied from March to early September climbing from $20 to over $70 in a little over five months. CVNA was quickly cut in half in the next two months with the rising 200-day moving average line being tested in late October.

Another test of the 200-day average in early December was not so successful and CVNA did not cross above this indicator again until early this month. The 50-day moving average line turned up in late February.

The volume pattern and the On-Balance-Volume (OBV) line make me cautious. Volume was heavier from the middle of September during the price decline. The OBV line did rise from May to September telling me that buyers were more aggressive on the rise but then the decline in the OBV line lasted to early February and has only moved up again the past few weeks.

The slow stochastic indicator which is an overbought/oversold tool (bottom panel) shows that prices are extremely overbought and thus they can be vulnerable to a correction. With chart resistance in the $60-$70 area (the previous high) I would not be an aggressive buyer at current levels.

In this weekly bar chart of CVNA, below, we only have about two years of history to manipulate. Prices are above the rising 40-week moving average line. The trading volume has been increasing from last March.

The weekly OBV line has moved up to a new high but prices are off their best levels.

The weekly Moving Average Convergence Divergence (MACD) oscillator recently crossed to the upside for a cover shorts buy signal. Crossing the zero line would be an outright buy signal but that has not happened yet.

In this Point and Figure chart of CVNA, below, we can see the strong rally and that prices have reached and passed an upside price target. Reaching a price target is not necessarily a technical reason to see but I tend not to ignore it either as some sort of correction could be in the making. 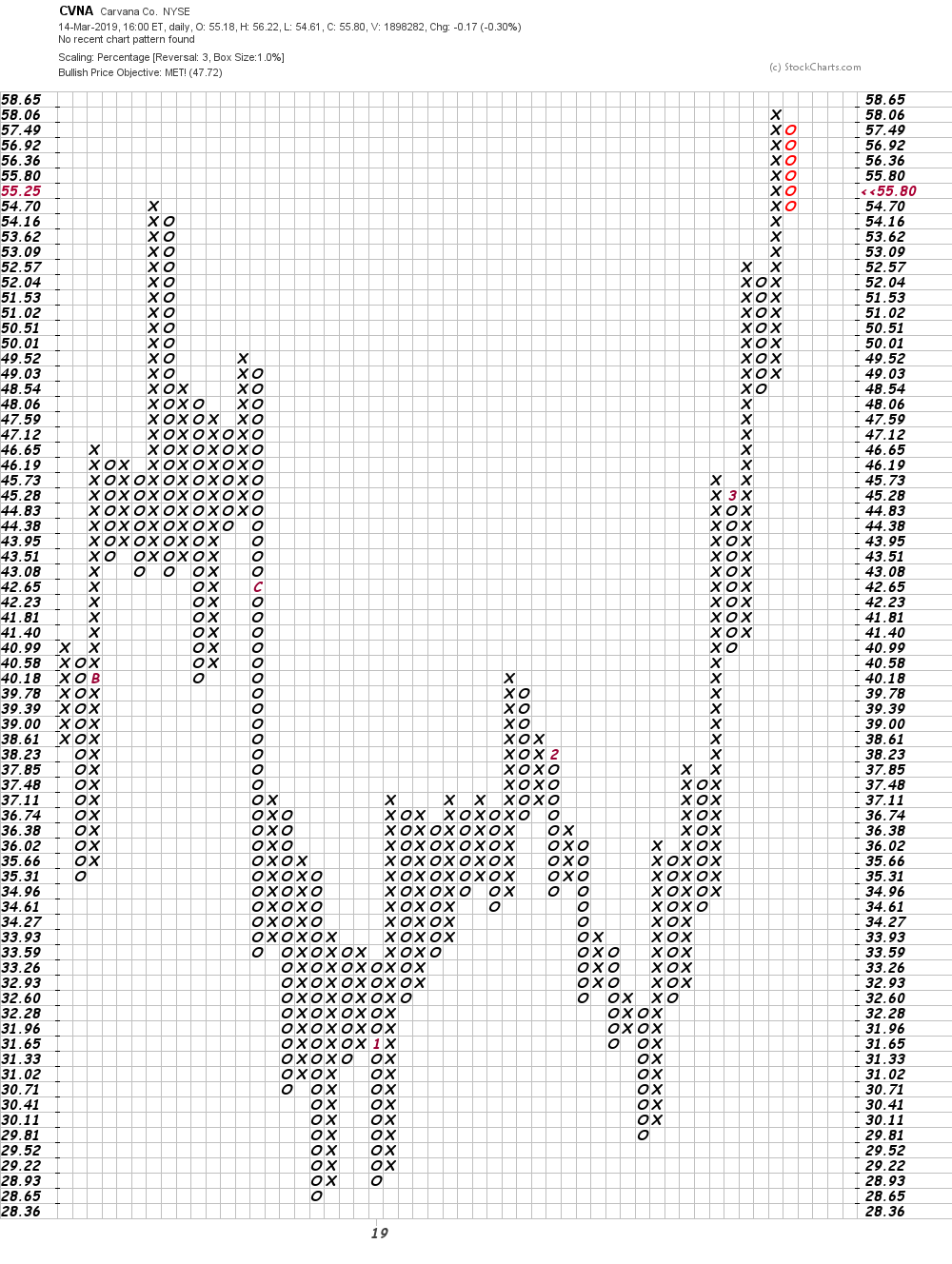 Bottom line strategy: Traders did not get much of a technical signal to jump ship back in September before prices dropped 50%. We could be looking at a similar technical set up. Longs should look to lock in gains.

Get an email alert each time I write an article for Real Money. Click the "+Follow" next to my byline to this article.
TAGS: Investing | Stocks | Technical Analysis | Trading | Automotive | Retail