In Jim Cramer's game plan for this week as part of his Mad Money program Friday night, he noted that on this coming Friday, we get earnings from a stock he likes - CarMax (KMX) .

We last looked at KMX on March 30 and felt there was more risk in owning the stock and suggested that it should be avoided. Prices pulled back sharply in early April but like many other stocks they reversed gear and took off on the upside.

How do prices look at this juncture in time?
In this daily bar chart of KMX, below, we can see that prices soared back into the area of the prior highs made in November, December, January and February. Prices were in this area for four months before its rapid decline in March so it is logical to assume that there are a lot of longs from that time period who are looking to "get even".
Prices are above the rising 50-day moving average line and the rising 50-day moving average line but that may not last for long. The daily trading volume did not expand from the March low and actually declined which is not constructive.
The On-Balance-Volume (OBV) line shows a very modest improvement from March which suggests limited aggressive buying.
Fitting in with this weakening technical picture, the Moving Average Convergence Divergence (MACD) oscillator has crossed to the downside for a take profits sell signal.

In this weekly bar chart of KMX, below, we can see a generally positive picture. Prices are above the rising 40-week moving average line.
The OBV line on this time frame looks a little better than the daily line and is not far from making a new high for the move up. The MACD oscillator shows a cover shorts buy signal last month.

In this Point and Figure chart of KMX, below, we can see a potential upside price target of $107 but a trade at $85.59 would be a new low for the move and would probably weaken the charts. 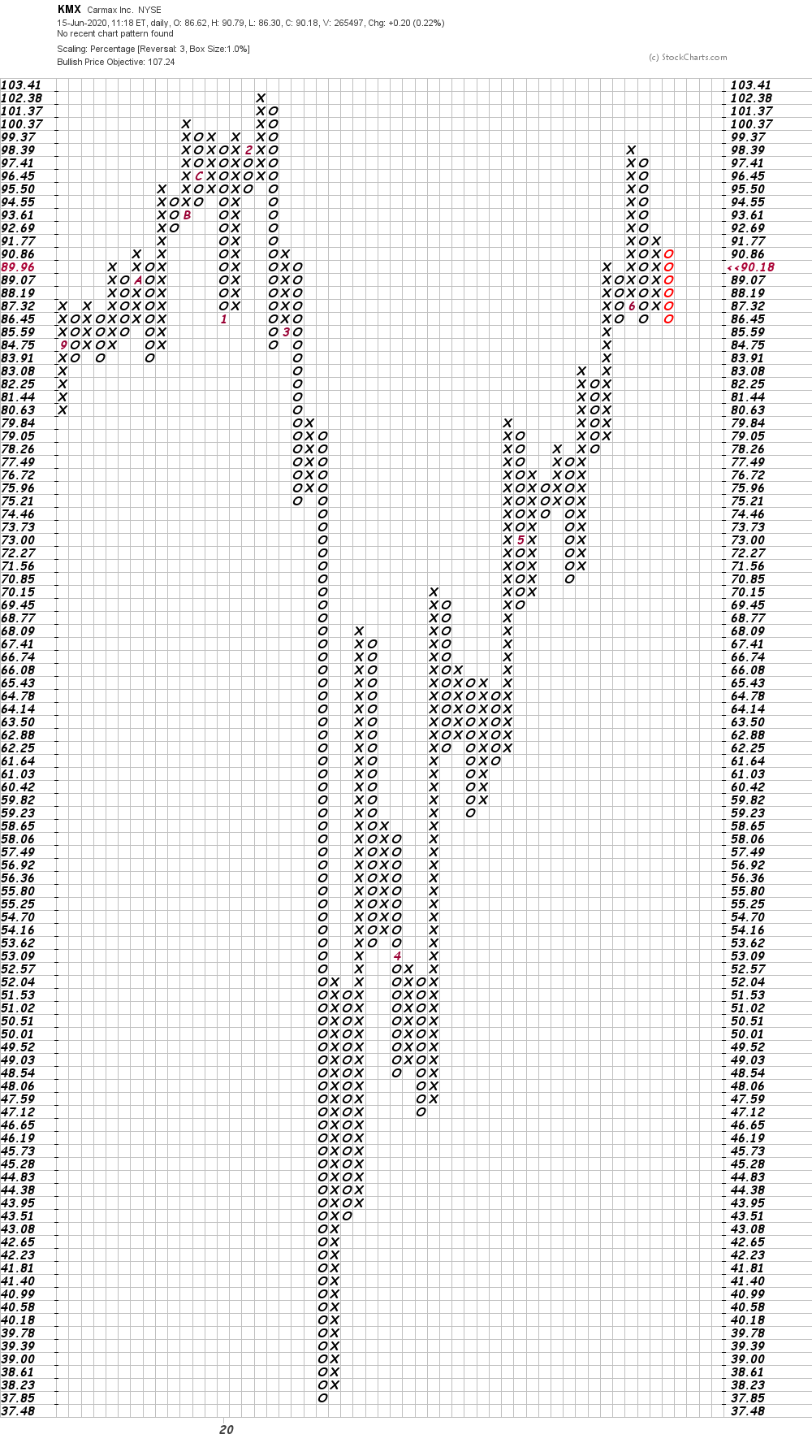 Bottom line strategy: It looks like KMX has reached a temporary high after being rejected in the resistance area from $90 to $103. We could see prices back up towards $78-$80 area where they should be checked again.
Get an email alert each time I write an article for Real Money. Click the "+Follow" next to my byline to this article.
TAGS: Economy | Investing | Stocks | Technical Analysis | Trading | Automotive | Mad Money | Earnings Preview