I wake up early. Real early. As far as I know, earlier than everyone not named Jim Cramer. I think. Yes, I trade/invest every day of every week. Before I trade anything, and before I write anything (I write just about every day of every week, as well.), I think about everything. From the markets to economics to making it through this pandemic. Last part... not so easy. Sometimes the thinking goes real well. Maybe just 10 minutes and then off to the races we go. Sometimes, I can't believe that an hour or even 90 minutes later, I still don't have a clue.

When I get a little stuck, I try to fall back on what we know, and cross examine the evidence with what we assume, and then try to comprehend just where it is that I (or we... we as in Wall Street) are surely just as clueless as everyone else. The trick, nah scratch that, no tricks. The task is to trade instinct, invest in the perception of elevated certainty, and simply avoid any situation labeled as "clueless". All this, while maintaining one's footing on a path of well defined, and well understood set of core disciplines. Always, remember that without discipline, it becomes difficult to repeat patterns that have resulted in victory while repeating mistakes that tend to lead to failure become all too easy.

Most likely, our marketplace is currently rife with both a number of seasoned types who know that they don't know, as well as enough early winners who don't know that they don't know. Dangerous? Perhaps. Perhaps we lose an entire generation of investors due to early success in trading a market that only went up for four months. At least this is what the man in the blackened window told me at zero dark-thirty this morning. Nice fellow, seems honest. Always liked him. He's older now. and really skinny.

Dust In The Wind

What makes a market? What is price discovery? What is trend, and what input goes into that process. Think it's as easy as following the money? Well, simplified, you are right. Everything from the price of one share of a public corporation to bond yields, to the price of a double cheeseburger at your favorite drive-thru fast food joint is based upon capital flows. Think now, though, about how a (mostly) free economy builds something such as the flow of capital. I have traded everything except Forex and baseball cards professionally at some point in my life, and baseball cards I have traded for fun. I have always found numbers and reasons for numbers very interesting. Probably why baseball was always my favorite spectator sport. Probably why I was stopped on a street corner at Camp Lejeune as a kid by a full bird Colonel one day back in the early 1980's because he had never seen a Corporal carrying a folded copy of the Wall Street Journal before. I was not in any trouble. He was just stunned. Must have thought all junior NCOs were cavemen.

Back to the process. Equity markets had a terrific week. For the most part, the U.S. dollar softened. That gave a boost to everything from stocks, to all kinds of commodities. The belief was that legislators in the U.S. would get their ducks in a row, and provide more fiscal support (because stimulus is the wrong word) to an economy that clearly can not function properly on its own at this time. Interpreting the flow of capital in theory, or at least historically for equities is quite simple. It's about growth, or the lack thereof. Specifically... Earnings growth. Broadly... Economic growth. (We have neither) This is where a fork in the road becomes apparent. What provides such growth? There are two legs. Down one side is policy, both monetary and fiscal. Down the other... not necessarily in order is all of the fun stuff that weirdos like myself think about in the middle of the night... Ease of Commerce, Velocity of Money, and then Consumer and Business sentiment. Now, the two legs come back together to form roots. These "roots" are what you and I refer to as valuation.

This valuation is the result of all of that input just mentioned. Should one leg (Commerce, Velocity, Sentiment) weaken, the other must strengthen. I am certainly a free market capitalist, and have always resented government overreach. Understand though, that without leaning more heavily on policy, standards of living will contract significantly. They may not recover. Not quickly anyway. You say that we have already leaned heavily on policy. That would be correct. For far too long. Not just the U.S., but the entire planet entered this pandemic induced economic contraction already standing upon the house of cards built through the irresponsible policy efforts of decades past. No, we do not cast blame now. That would be futile. If we are to move forward as a people, we must deal with "what is" in the here and now, and then we must actually be "a people."

Policy has sustained the U.S. economy at its current level, as commerce and velocity have slowed. The economy will be smaller than it was, and at some point, expectations for consumer level inflation are going to have to change. The issue at hand is twofold. On one hand, levels of Money Supply and necessarily deep deficit spending have changed the playing field.

On the other... due to this pandemic, there has been an extreme, and certainly overtly negative impact placed upon modern day labor markets. There has also been an unanticipated acceleration of evolution in what these markets require in terms of demand from an under prepared supply side. Put bluntly, moving forward... there will be fewer competitors across fewer industries that require fewer on-site laborers. That, my friends will have a multiplier effect, not unlike the purchase of a new home, but in reverse. Less workers congregating in centralized locations. Simply, this means less pizza places, less delicatessens, less coffee shops, less need for office supplies, business apparel, mass transit, and last but not least, corporate real estate.

As awful as second quarter "earnings season" has been, large caps have generally out-performed low expectations by a wide margin. With 89% of the S&P 500 having now reported, 83% have beaten bottom line expectations, if one follows FactSet. Just 82% if one chooses the numbers provided at Refinitiv. Huzzah. This will be the highest beat rate since FactSet started compiling such data back in 2008. Revenues have been running at a beat rate of 64%. The implication there? Yes, expectations were set too low, but also that a large percentage of large caps are managing overhead through this crisis with a heavy hand by necessity. This encouraging beat rate still disguises earnings growth of something close to -34%.

Across the S&P 500, in aggregate,Q2 net profit margin has decreased to 8.4%. This would be down from 11.4% a year ago. Of the 11 sectors, only the Utilities have experienced net margin expansion. The Energy sector can not even post a positive number. For the full year, Wall Street still sees earnings growth of nearly -20% on revenue growth of -3.2%. Still, on that weaker dollar, equities moved higher. The S&P 500, riding a six day winning streak, now trades at an aggregate 22.3 times next 12 months earnings. The Nasdaq Composite, by the way, did suffer a "down day" on Friday, which broke a seven day streak of their own. What happened there was clearly in my opinion, a spate of professional distribution (profit taking) that most greatly impacted the tech sector, while affording support to bond proxy type equities.

It became obvious by Friday night that Congress was going to fail to reach anything resembling a compromise on fiscal policy for the immediate to short term. This forced the president to move on a series of executive actions that while raising eyebrows, as Congress has the legal authority to control expenditures at the federal level. That said, can anyone argue that the unemployed, or the about to be evicted need protection? Perhaps this keeps our legislators present in Washington. I mean "gee whiz". Oh, and I have a number of friends on both sides of the aisle. Not a peep out of any of you. I have never been so proud of not being a Democrat nor a Republican.

One story caught my eye overnight. As mentioned, this pandemic has accelerated changes in consumer behavior. Even now, after having opened, when was the last time you even heard of someone "running over to the mall"? Most in my area have no idea if the mall near me is even opened or closed. I just checked. That mall has reopened. One certainly can not tell by looking at the parking lot.

It appears that the nation's largest operator of shopping malls, Simon Property Group (SPG) is, or has been talking to Amazon (AMZN) about turning some now closed "anchor" type department stores into fulfillment centers in order to cut delivery times (the last mile) to residential neighborhoods. That mall that I speak of, jogging distance from my home, has three anchors. Two are closed, and one is still in operation. The two that closed were a J.C. Penney (JCP) location, and a Sears (SHLDQ) . The holdout is a Macy's (M) . The idea would do wonders for local level unemployment. By the way, Simon Property Group reports this afternoon.

You see that? What? The Friday breakout. Where? NoroinLifeLock (NLOK) , that's where. Early Friday morning, the firm reported a beat and a beat for both fiscal Q1 EPS and sales. The firm also raided Q2 guidance based upon a 9% increase in consumer bookings on top of an increase in the firm's direct customer count to 20.6 million accounts. Let me show you the chart: 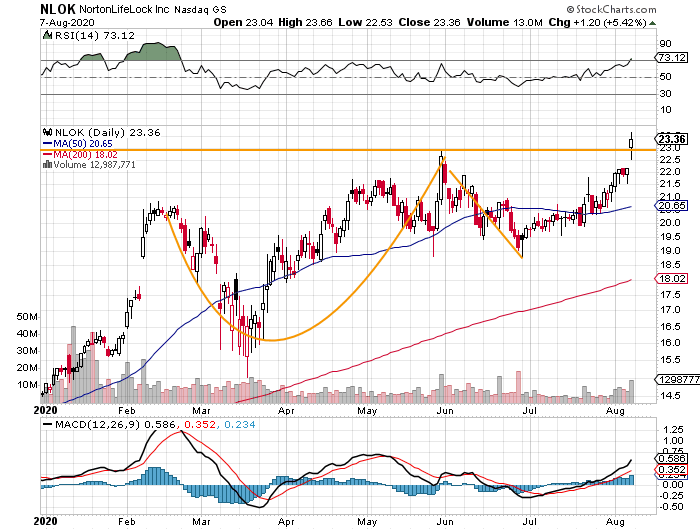 That's one large cup with handle pattern if I don't mind saying so. The shares completed the right side of the cup in late May, and then completed the handle in late June. The shares finally crested that more than two month old pivot point on Friday. What now? What NLOK does around the $23 level remains key. My thoughts? They fail, investors are looking at support that approaches $21 (50 day SMA). They run? I think investors probably target $28. Just a thought.

(Amazon and NortonLifeLock are holdings in Jim Cramer's Action Alerts PLUS member club. Want to be alerted before Jim Cramer buys or sells these stocks? Learn more now.)

Get an email alert each time I write an article for Real Money. Click the "+Follow" next to my byline to this article.
TAGS: Earnings | Economy | Investing | Markets | Stocks | Technical Analysis | Trading | Cybersecurity