I took on the task of looking at the pending deal between Canopy Growth (CGC) , and Acreage Holdings (ACRGF) . I'll tell you what. This deal is rather complex, and really represents a right to acquire rather than an actual acquisition. The shares of both stocks are trading higher this morning, and that does make some sense. This deal would be a positive and leave not only Canopy, but Canopy's deep pocketed investor... Constellation Brands (STZ) well positioned should the use of cannabis ever attain a level of Federal legality.

The Lay of the Land

The story really begins with the November 2017 investment made in Canopy Growth by Constellation Brands that left Constellation with a 38% equity stake in the firm and a pathway toward a controlling interest over a number of years. This week's story however began on Tuesday. That day, Canopy announced an all cash purchase of Spain's Cafina. Cafina comes with a licence already in force to cultivate, distribute and export cannabis for medical and/or research purposes. This adds to Canopy's presence in Europe that already includes facilities in Germany and Denmark.

On Wednesday, Bank of America initiates coverage of both Canopy, and Aurora Cannabis (ACB) with  buy ratings. Bank of America placed target prices of $52 on CGC, and $11 on ACB. By the way, ACB is a holding of the "Stocks Under $10" portfolio that I co-manage with Chris Versace, and we were many months ahead of Bank of America with the $11 target price for ACB. Yes, that's called bragging.

Now, this complex deal. The way I read this, shareholders of ACRGF will receive an immediate aggregate payment of US $300 million, or roughly $2.55 per voting share. In addition, there will be a right, that if exercised would deliver 0.5818 share of Canopy in exchange for each one share of Acreage upon the closing of the transaction. The companies will execute a licensing agreement that grants Acreage access to Canopy's brands as well as other intellectual properties. The right, which would leave canopy with 100% control of Acreage, will become a requirement upon the federal legalization of production and distribution of cannabis in the U.S. Acreage has a licence or agreement in place to operate in 20 U.S. states, encompassing 87 dispensaries,and 22 cultivation/processing sites.

Until that time comes, the two companies will operate independently. In response to the news, Constellation Brands has announced that, while the above pending transaction is subject to Canopy Growth shareholder approval, that Constellation would agree to waive the veto rights that Constellation holds subject to certain modifications to the warrants that STZ holds as far as purchasing greater control over CGC is concerned. I could list the modifications, but I fear losing the audience.

With a deal like this in place, I think Canopy Growth now has to be considered the leader in the Canadian cannabis space with the best chance to transition to broader success should the U.S. ever go the route of legalization beyond the state level. The support of Constellation Brands cannot be understated. Sure, Altria (MO) has taken an equity stake in Cronos (CRON) , but there is far less scale in that operation. 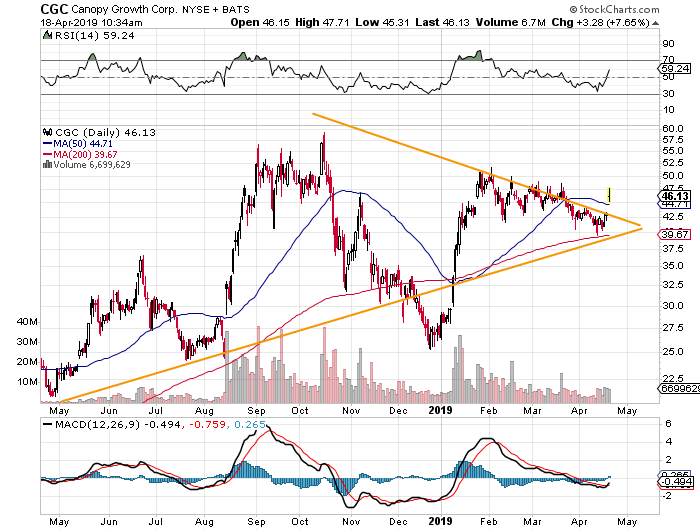 One is quickly drawn to the year long series of lower high in CGC, couple with higher lows. This kind of action at the point of sale often leads to a violent move of some kind, without indicating direction. This morning, we may have seen that direction take shape.

It looks to me that STZ is in the process of completing a cup formation. This would be generally (or maybe just possibly) bullish in my opinion. The key here will be the stock's ability to hold the 200 day SMA, just recently captured from below, upon the next application of pressure. I can see a reason to invest in either one of these names, but not today. Not on the pop. If an investor were to look out six months that individual could probably sell October STZ 175 puts for $5.25. How's $525 in the pocket today in exchange for possibly buying the shares at a $20 discount to today's price in six month's sound? Even if forced to eat the shares, that's a net basis on $169.75. October CGC $35 puts are currently valued around $2.50. Same idea.

Get an email alert each time I write an article for Real Money. Click the "+Follow" next to my byline to this article.
TAGS: Mergers and Acquisitions | Investing | Markets | Options | Stocks | Technical Analysis | Trading | Canada | Cannabis