Sales absolutely soared to $15.53 million, a year-over-year increase of 204%. That's what the overnight crowd needed, as the shares traded higher premarket, before reversing early Tuesday after the open.

The fact that Tilray posted a GAAP net loss of $0.33 per share versus expectations for a loss approximately half that size appears to be neither here nor there at the moment. The fact that the company had a profit for the same period a year earlier? Nobody cares.

Why Don't They Care?

Apparently, this game is all about growth right now. Growth in sales, already mentioned, and growth in net selling price per gram (+5%). It certainly is not about margins.

As cannabis firms work toward expanding market share, and global reach, they spend, and they spend to acquire. In the case of Tilray, the company paid $317 million to bring in Manitoba Harvest.

Items like this, as well as competing in Europe have brought gross margins down to 20%. Though CEO Brendan Kennedy, does expect those margins to eventually rebound, he did caution on expecting this too quickly.

Expect volatility here. The stock was up early on, unless that was nothing more than a short squeeze, before reversing in Tuesday morning trading.

As of late February, 3.99 million shares of TLRY were held in short positions. The entire float encompasses just 12.46 million. You be the judge.

These shares also stand at 300% higher than in July when they debuted, and 75% below the peak in September.

Adjusted EBITDA for the fourth quarter came in at -$17.7 million. At least Tilray has deals in place with Novartis AG NVS and Anheuser-Busch InBev BUD, and sits on $487 million in cash and equivalents. That makes the company less likely to resort to dilution in order to provide capital.

Aurora Cannabis (ACB) , of course. Aurora is a lot more stable, and a lot more affordable for home-gamers with less downside risk. On top of that, if the company ever does agree to any kind of partnership with a larger firm, it's still in the future. Just sayin'.

Aurora Cannabis is a holding in TheStreet's Stocks Under $10 portfolio. Click here to learn more about this portfolio, trading ideas and market commentary product. 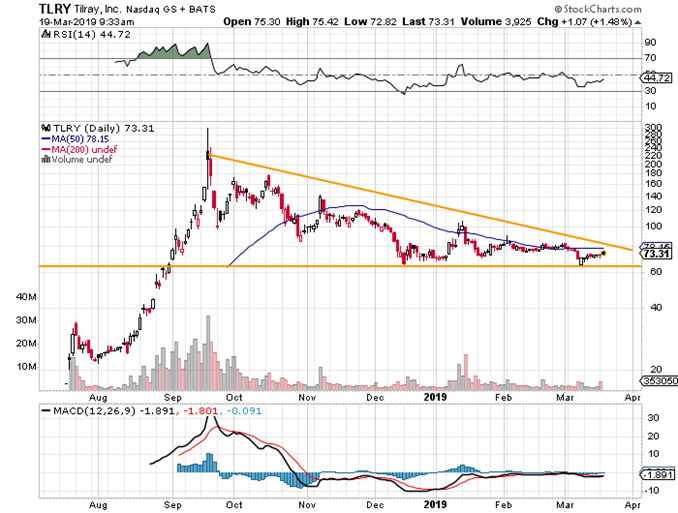 The only thing that Tilray's chart tells me for sure is that the stock came in set up for an explosive move one way or the other. As a trader, I would not underestimate or make light of the upside momentum generated by a short squeeze in a name with such a small float relative to average daily volume. Nor would I trust the fundamental picture as an investor.

A trader might be able to purchase a TLRY $72 - $75 March 22 (this Friday) strangle (the purchase of one call and one put) for roughly $3. That's a trade that might have a chance in response to Monday night's information. If the shares have moved, I am talking about giving a the strangle a $3 span around the last sale.

Get an email alert each time I write an article for Real Money. Click the "+Follow" next to my byline to this article.
TAGS: Fundamental Analysis | Investing | Trading | Canada | Cannabis | Stock of the Day

There's one mistake that's easy for traders to make in this sort of market.

The Easiest Way to Play the Dip in Marijuana MSOs

What caught my eye Thursday was the bullish reversal in Curaleaf Holdings and Cresco Labs during the final minutes of the trading session.

The good news is that some of the frothy speculation has cooled, and skepticism is building.