Cannabis SPACs have been the most popular form of investment in the industry over the past year. SPACs are special purpose acquisition corporations, and the goal is to raise a large sum of money to turn a private company into a publicly traded one. The SPAC is the company that is the initial public offering. It then uses the money raised to acquire a private company to bring it into the SPAC and thus it becomes a public company.

SPACs are more costly for the private company versus going to an investment bank for an IPO, but there is less due diligence. It's also appealing for cannabis companies who are challenged by the traditional banking system. The unique thing about SPACs is that there are a couple of characteristics that set them apart from other venture funds.

First, SPACs must spend at least 80% of the raised money on at least one "qualifying transaction" or acquisition. Second, the SPAC has 18-24 months to complete the acquisition and close the IPO. According to Viridian Capital Advisors, there are 10 cannabis SPACs representing $2.57 billion of IPO proceeds that need to be deployed.

In this chart provided by Viridian, the blue bars on the graph shows the number of months left in the permitted timeline for the SPAC to complete its qualifying transaction or seek an extension. U.S. listed SPACs on the NYSE and Nasdaq are only allowed to invest in companies that do not "touch the plant", putting an even further challenge on the SPAC management. This countdown clock means that the acquisition activity is going to be picking up steam over the next four to six months. 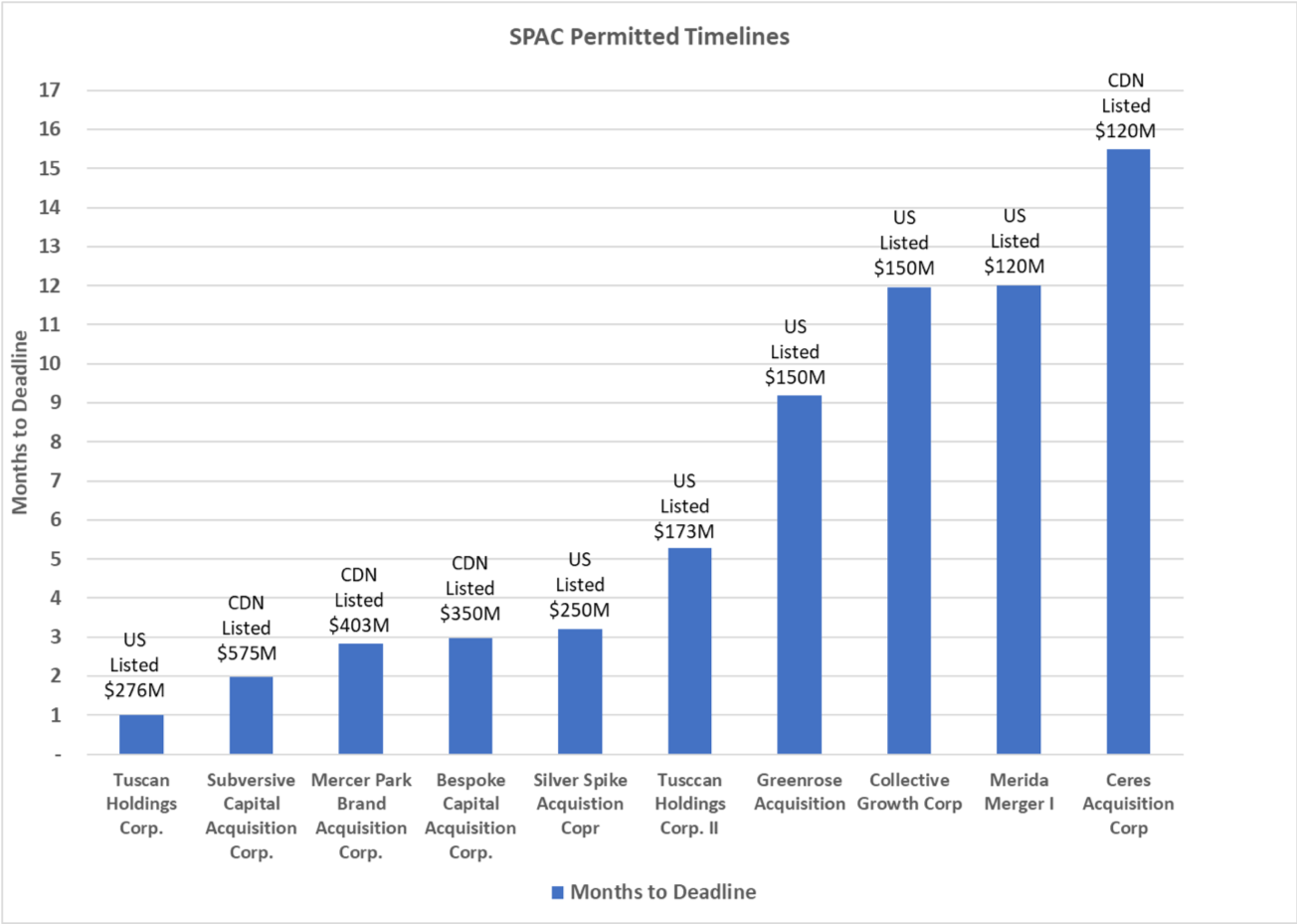 The clock is ticking for some of the early SPACs, including Tuscan Holdings (THCB)  and Silver Spike (SSPKU)  which have U.S. investment constraints. There is less than four months left on their timelines, and over $250 million each to invest.

Viridian believes that other U.S. SPACs, including Greenrose Acquisition Corp. (GNRSU) , Collective Growth (CGROU) , and Merida Merger Corp. (MCMJ)  are likely to have to negotiate the tricky simultaneous closing of several acquisitions since the industries that they must invest in generally contain smaller companies.

Collective Growth Corp is the first and largest SPAC focused on building the U.S. commercial hemp supply chain - not on CBD. Geoff Whaling, a co-founder of Collective Growth, said it was more focused on the conversion of hemp seed, fiber and hurd into raw materials for end users - food, plant-based protein, natural fiber for composites, and textiles. Hemp hurd comes from the woody inner part of the hemp stalk. Plus he wants to use hurd for animal bedding, fuel, housing and commercial construction. "Our principle focus is in two areas, Food to Pharma and Sustainable Industrial Disruption," he said.

Collective Growth has a time frame of 18 months versus some that are 24-36 months and who have raised much larger sums. He added, "These huge SPACs significantly reduce the number of potential targets and therefore, success." Whaling partnered with cannabis business icon Bruce Linton to raise the funds for Collective Growth.

"Bruce was encouraged by numerous underwriters to go big. Yet we know the market and knew that 'big' would not work for our goal. Let's remember that investors/shareholders are looking for their investment to result in a much larger valuation on the other side of the transaction. Given that there are no such hemp companies - who have revenues and valuation to meet SPAC requirements - in North America (with the exception of Manitoba Harvest owned by Tilray (TLRY) ) we have to look beyond our borders for targets," said Whaling. He noted that even most European hemp companies are family owned and have never undertaken an audit. The other problem facing the dynamic duo is there is not one hemp company in the world that is valued at $120 million. "So, to meet the NASDAQ SPAC rule of expending 80% of funds raised, we need to build a bouquet of companies to meet these thresholds. And this reality brings additional complications," he added.

Whaling also noted that his volunteer role at the National Hemp Assoc, combined with his and Linton's roles at Canopy Growth (CGC) have resulted in access to most businesses in the space. "This has allowed us to negotiate and sign five terms sheets, which are now in due diligence phase," he said. "This fact however does not assure success."

Having lots of money ready to spend has made them the bell of the hemp ball so to speak. Dozens of companies have been approaching the Collective Growth team weekly hoping to get access to the investment money and becoming part of a public company.

The focus is on positioning for the election and CPI Thursday.

It's a dicey play as the price action isn't defined as yet and the ETF still could break lower.

If You're High on Tilray, Invest for the Long Term

TLRY is probably not that close to sustained profitability, but it has built the balance sheet to tough out these hard times.

I Have a Strategy for This Cannabis ETF

Let's review the charts and indicators of MSOS.