This is often referred to as a "pick and shovel" play in reference to those merchants that made great money supplying tools to miners during the California gold rush.

One theme that is gaining traction into the upcoming election is cannabis. There are still many legal hurdles for the industry and this has forced those that sell cannabis to be listed on the pink sheets and in Canada.

One name in the sector that doesn't have that issue is GrowGeneration (GRWG) since it does not sell any actual cannabis. GrowGeneration owns and operates retail hydroponic and organic gardening stores in the U.S. It sells lighting, fertilizers, humidifiers, pumps, and everything you need to operate your pot farm. It has about 28 stores in 10 states and has a dedicated commercial division for accounts over $50,000.

The stock exploded in August following a very strong earnings report. Revenues grew 123% to $43.5 million and the company increased annual guidance to $170 million-$175 million this year and $245 million-$250 million in 2021.

The huge move and good numbers caught attention and were highlighted by Jim Cramer, who interviewed management, and the stock was attacked by short-seller Hindenburg Research.

After some big swings, GRWG stock has fallen into a trading range where it has been for about six weeks. It is breaking above resistance Wednesday and I'm looking for some renewed momentum as traders look ahead to the third quarter report, which should be out in November. 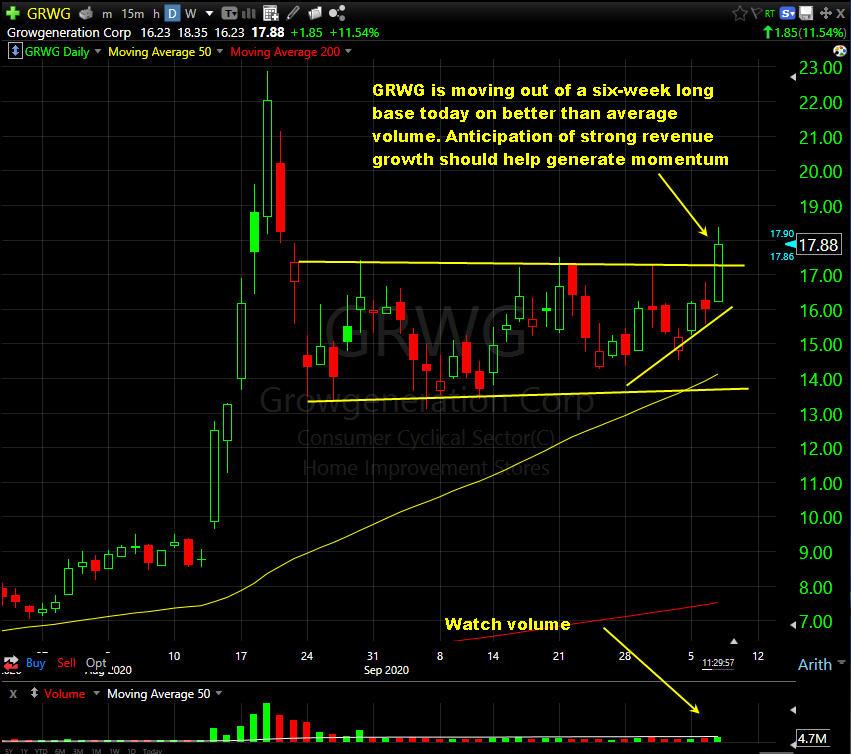 Get an email alert each time I write an article for Real Money. Click the "+Follow" next to my byline to this article.
TAGS: Short-selling | Investing | Markets | Politics | Small Cap | Stocks | Technical Analysis | Trading | Cannabis

As SPACs Get Sold Off, Let's Get Deep Into the Weeds

Cannabis names are starting to light up.