Illinois will begin legal sales of adult use cannabis on January 1. The corn state is estimated to become one of the largest adult-use cannabis markets in the United States with annual sales estimated at between $2 billion-$4 billion once the market hits maturity.

To date, the state has issued 34 licenses to various companies which included six added in December. However, not every license will be usable. Some municipalities opted out for now, so there are a few medical marijuana dispensaries that went ahead and got a recreational license with the hopes the city will change its mind in the future. Only adults older than 21 will be able to make a purchase.

They can legally possess:

A non-resident of the state over the age of 21 may legally possess:

These are the top five license holders according to data provided CannaBIz Media, which tracks licenses across the country. 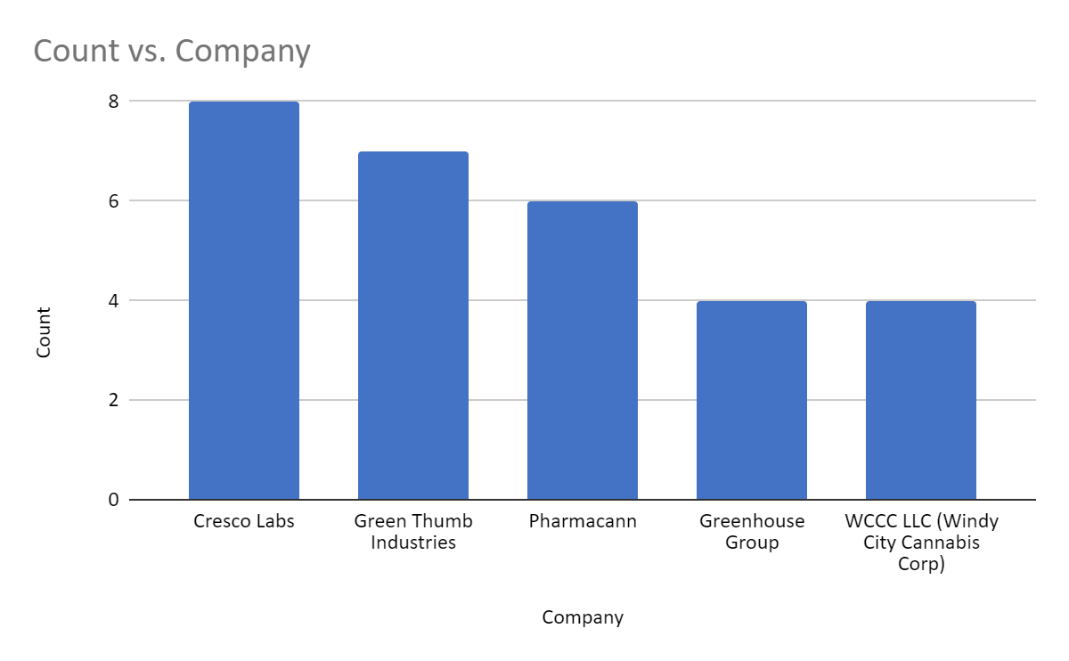 Medical marijuana license holders got first dibs on the recreational licenses and are getting a jump on the other applicants who will have to wait for another round. Some of the large multi-state operators are among the group. Brian Lauvray of cannabis consulting firm MMLG said, "Aforementioned companies will all greatly benefit from first movers advantage. Additionally, many of them with cultivation and/or manufacturing capacity will have an arguably even larger advantage in that retail licensees following May award announcements will be buying product wholesale from them because IL. won't be awarding craft cultivation/manufacturing licenses for new applicants until July (and then there will follow an extended on-ramping/grow cycle for those licensees.)"

Cresco Labs CL:  (CSE)  OTC: (CRLBF)  said that it was opening one of its first five Sunnyside dispensaries in Lakeview, Elmwood Park, Champaign, Buffalo Grove and Rockford. It is the only operator in Illinois with three cultivation facilities. Since the company has an advantage by having the largest authorized capacity in the state, it is already a step ahead of others.

"New Year's Day is an historic day as the end of cannabis prohibition launches in Illinois. We are expecting pretty large crowds and long lines to form as early as midnight on New Year's Eve to celebrate the excitement of this milestone. Our Sunnyside Dispensaries are prepared to help introduce a new type of wellness to a broader set of customers across the state - both through our in-store consumer experience and through our new online platform," said Charlie Bachtell, Cresco Labs CEO and co-founder. "Cresco is also very thankful to our customers for supporting the social equity and restorative justice elements of this program as several of the excited customers at our Wrigleyville location have made significant donations to our Gift of History initiative with all contributions benefiting the Last Prisoner Project."

Cresco said in a statement that it currently distributes to every dispensary in the state and its Illinois retail presence will include 10 Sunnyside dispensaries, with three located in prime, high-traffic Chicago locations opening in the spring.

Green Thumb Industries OTC: (GTBIF)  , or GTI, says it will be ready for Illinois on day one. The Clinic Mundelein is being rebranded to its national Rise retail brand ahead of adult use sales. The company said that this store was the most popular by patient count in the entire state.

"We are thrilled Rise Mundelein will be open for adult use sales on January 1, the first day it becomes legal in Illinois," said GTI in a statement. "This location was open to patients on the first day of medical sales in November 2015 and is GTI's first store so it holds a very special place in our company history. We look forward to continuing our great relationship with the Village of Mundelein, its residents and the community.

PharmaCann turned over some of its Illinois licenses to MedMen OTC: (MMNFF) as part of a termination fee when the two companies decided to end their planned merger. MedMen received the operational cultivation and production facility in Hillcrest, a retail location in Evanston and a retail license for greater Chicago. The company has licenses for Verilife dispensaries in North Aurora, Arlington Heights, and Ottawa. MedMen though recently sold its Arizona licenses and said it would consider selling other assets including the Illinois licenses.

Columbia Care OTC: (CCHWF) said earlier in December that it received its first adult use cannabis retail license approval by the state. The company has been serving medical cannabis patients in the Chicago area since 2016. "The approval of our adult use licenses will allow Columbia Care to increase its scale and market penetration to achieve profitability at an accelerated rate. Illinois is estimated to be a $2 billion market and we intend to distinguish ourselves the way we have across the country - driving customer loyalty by defining market expectations for quality, differentiated products and unique services," said Nicholas Vita, CEO of Columbia Care.

The full list of licensees can be found here.

While 2019 was a decidedly bad year for cannabis stocks, 2020 could be looking more positive as new sales come online in this state for these "first to market" companies.

As all eyes are on Churchill Capital IV and Lucid Motors, let's broaden our focus to these other names -- especially those in the commercial electric vehicle sector.

After a Brief Rest, Stock Pickers Are Back

I believe that the corrective action of the last couple of days should be a platform for some good technical action.

Small-caps have underperformed the last few days but that's to be expected after the run they've had.