Gov. Andrew Cuomo of New York presented his 2019 agenda on Monday morning to the New York Bar Association and it included his plan to legalize adult use cannabis.

"The fact is we have had two criminal justice systems: one for the wealthy and the well-off, and one for everyone else," Cuomo said in describing marijuana laws that he maintains "for too long targeted the African-American and minority communities."

"Let's legalize the adult use of recreational marijuana once and for all," he said.

During the midterm elections, the New York state government shifted to Democratic control and it was expected the new lawmakers would fully legalize cannabis. So, Cuomo is just getting ahead of this expected move. The tax revenue and jobs from fully legal cannabis would be a big boost to some of the needy areas in the state.

Last May 15, New York City Comptroller Scott Stringer published a report estimating the potential size of the state's legal cannabis market and how much tax revenue it would generate for both the city and the state. According to the report, the New York statewide cannabis market could see up to $3.1 billion in annual sales, with up to $1.1 billion generated in New York City alone. In terms of tax revenue, legal cannabis could generate up to $436 million for New York state and $336 million for New York City. Some lawmakers have suggested this money could be used to fix the city's troubled subway system.

Cuomo probably isn't thinking just about the tax dollars, but also is looking at job creation. A study published by Joblift shows that cannabis growth in California is steadily declining, while New York state is experiencing strong growth. New York is now third in terms of gross domestic product and is experiencing a "surge in medical marijuana job postings," with the study saying it could hold "the most potential for overall growth in the sector."

New York experienced two times more marijuana-related job postings in the first half of 2018 than in the prior year (155 vs. 67). Massachusetts and Pennsylvania are also seeing strong growth in job postings, with the Keystone State seeing a fivefold surge in openings to 82. Massachusetts saw a jump by a factor of four in the same time frame. Cuomo does not want New York to lose these jobs to neighbors such as New Jersey and Massachusetts that are also legalizing cannabis use.

Next comes the question investors want to know: Who is poised to capitalize on the New York market? Cannabiz Media is a company that tracks license holders in states around the country. 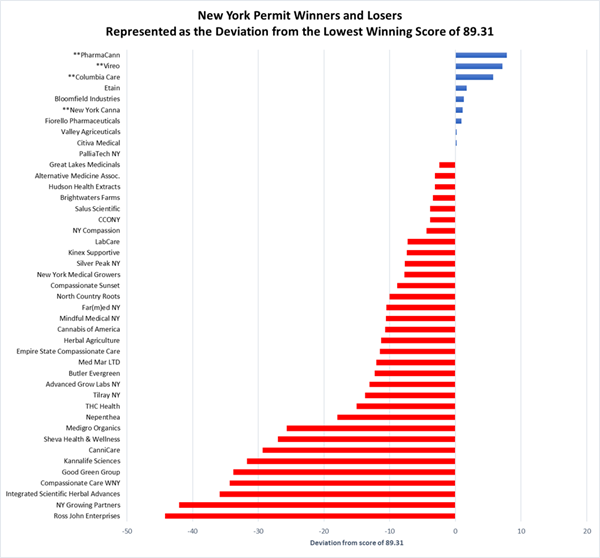 According to its data, it looks like MedMen Enterprises Inc. (MMNFF) is poised to be the big winner as a result of its acquisition of PharmaCann, which had the highest number of permits awarded in the state. MedMen acquired PharmaCann for $682 million in an all-stock deal back in October. The transaction not only doubled the reach for MedMen, but expanded its presence in New York.

MedMen had acquired New York's struggling Bloomfield Industries at the beginning of 2018. The company had been unable to pay vendors and was looking for new investors. Bloomfield was one of the original five licensees in New York.

MedMen made a big splash when it opened its 5th Avenue dispensary. At the time plenty of cannabis industry insiders questioned the logic of paying such a high rent for the high visibility of a Manhattan address in a program with so few patients. They wondered how long it would take for a restrictive state such as New York to change its outlook on adult use cannabis. Apparently. the answer was not very long.

Vireo Health is next on the list. Vireo is a physician-led multistate medical cannabis company that says It is "committed to safely alleviating pain by providing patients with best-in-class cannabis products and compassionate care." This company is still private, although it did raise $17 million back in August and said it is planning on going public at some point.

Next in line for number of permits is Columbia Care, which isn't public yet but soon will be following a merger with Canaccord Genuity Growth (CGGC), a special purpose vehicle. In October it was announced that the two companies would combine. The companies agreed that CGGC would be valued at C$60.7 million and that Columbia Care would be valued at US$1.35 billion. The deal is expected to close in the first quarter of 2019.

Columbia Care was selected to be one of five licensees in Virginia and became the first U.S. company licensed in the European Union. It was recently awarded one of the six new licenses in New Jersey.

Etain Health is one of the original five licensees in New York and it, too, remains a private company. It is female-owned and only recently began to expand beyond the state lines as it looks to California as another market for its products.

Acreage Holdings Inc.  (ACRZF) also stands to benefit due to its ownership of New York Canna, now known as Terradiol New York. New York Canna was formed in 2015. The initial shareholders of New York Canna were intended to be New Amsterdam Distributors (NAD) and EPMMNY. However, NAD and EPMMNY were unable to reach an agreement as to EPMMNY's contributions to the operating entity and the terms of investment. NAD says it was the sole shareholder of New York Canna when it began talking to Acreage among others.

EPMMNY doesn't agree with this assessment and recently filed a lawsuit asking for $400 million. EPMMNY says in its lawsuit that it was "frozen out" in 2016 and its stake reduced initially to 12.5% as NYCANNA merged with defendant NY Medicinal Research & Caring, which included NYCI Holdings, Impire Holdings and Acreage Holdings as investors.

Fiorello Pharmaceuticals, also known as FP Wellness, is licensed in New York state only. It is privately owned. The company lists its partners as The Clinic, Plant Consulting Group and LIU Pharmacy on its website. A report in the Daily Gazette said Fiorello Pharmaceuticals is building a medical marijuana production facility in Glenville and plans to open other dispensaries in Monroe, Nassau and New York counties. Green Thumb Industries or GTI (CSE: GTII) (OTC: (GTBIF) ) has plans to acquire FP Wellness, according to a company spokesperson.

iAnthus Capital Holdings Inc.  (ITHUF)  acquired New York's Citiva Medical for $18 million at the beginning of 2018. According to the original press release, Citiva NY's license included a cultivation and processing facility and four dispensary locations to be located in Brooklyn, Staten Island, Dutchess County and Chemung County. Citiva's proposed 2,000-square-foot flagship Brooklyn dispensary was slated to open in the fourth quarter of 2018 and would be one of only two dispensaries in New York City's most populous borough, with 2.6 million residents.

The statement said Citiva's Staten Island dispensary would be the only Registered Organization serving Staten Island's 500,000 residents, and it was also slated to open in the fourth quarter. The Dutchess County and Chemung County dispensaries are planned for the second quarter of 2019.

Finally, Palliatech, which changed its name to Curaleaf Holdings Inc. (CURLF) , is based in Boston. It has locations in seven New York counties. Its website says more counties are coming. Near Manhattan there is a dispensary in Forest Hills in Queens. In the company's last earnings announcement, it said it estimates it will post 2019 revenue of $400 million, including revenue generated by the nonprofits, and free cash flow of $100 million. Curaleaf expects to complete two acquisitions in the fourth quarter of 2018 in Maryland and Massachusetts. At the end of 2018, Curaleaf also expects to have at least 40 operational stores.

Get an email alert each time I write an article for Real Money. Click the "+Follow" next to my byline to this article.
TAGS: Investing | Real Money | Cannabis

Tilray Isn't Going to Get That High

TLRY posted promising earnings, but don't expect it smoke past its current levels for long.

I Wouldn't Jump on the Tilray Bandwagon, But Here's What I Would Do

You think the Tilray brand name is worth $2.8B? Market cap is barely above $3B. Does give me pause.

Cannabis is about the only space where I'm long, and that isn't for technical reasons.

2021 Year in Review: A Very Good Market for Mega-Cap Stocks... But Not Much Else

The broader market had a very tough go of it in 2021, but you wouldn't know it unless you do some digging. From Reddit and Diamond Hands to SPACs and a stealth bear market, it's been a wild ride.

Precious Metals and Cannabis Could Surprise to the Upside in 2022

And there are a few ETFs and a silver miner that could provide the vehicles to play this hunch.