Tilray (TLRY) surprised Wall Street on Monday morning with some profitability, even if revenues disappointed. For their fiscal second quarter, the firm posted GAAP EPS of $0.00, which beat Wall Street by roughly a dime, and showed as a significant improvement from the loss of $0.37 per share reported for the comparable year ago period. Net income hit the tape at $6M, up from $-89M a year ago. However, Tilray generated just $155.15M in revenue for the period, good for year over year growth of 19.8%, but well short of Wall Street'ss expectations.

On regional adaptation, the CEO went on... "Looking at performance highlights across key markets, we maintained our #1 cannabis market share position in Canada - despite market saturation and related competitive challenges - on the strength of our brands and adept pricing and market adjustments. In Germany - Europe's largest and most profitable medical cannabis market - our nearly 20% share leads the market."

Simon added, "Turning to the U.S., Sweetwater Brewing and Manitoba Harvest continued to invest in product innovation and acquisitions to enhance awareness and distribution. These profitable businesses further provide an opportunity to launch THC-based products upon federal legalization in the U.S."

First, almost everything is smaller. Second, though down significantly from six months ago, the firm's cash balance still stands at more than twice the firm's long-term debt load (also down). I like that. Current assets stand more than twice current liabilities. The current ratio is obviously in fine shape. Total assets stand at almost five times total assets less equity. That would be great, but one entry screams out at me. Goodwill. It has not changed, but it does dominate the asset side of the balance sheet. At more than $2.8B, the entry for goodwill accounts for 48.8% of total assets. That seems right to you? Given that total total hard assets would still decisively outweigh total liabilities, it only makes me wonder "why?" That, I don't like.

The firm does seem to be improving its execution. Of that, I don't think there is any doubt. You think the Tilray brand name is worth $2.8B? Market cap is barely above $3B. Does give me pause. 11% of the float is short. Could see a mini short squeeze this morning. 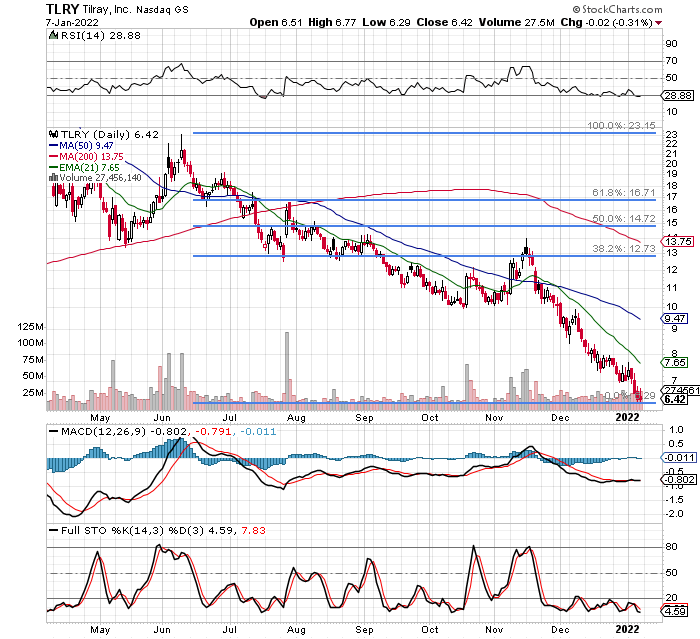 Nice chart. Not. The shares came in Monday morning severely oversold from a technical perspective. That said, by either Relative Strength or the Full Stochastics Oscillator, Tilray has been oversold for almost two months straight. I came into this piece thinking that maybe I would put this name into the "Stocks Under $10" portfolio, or at least in the bullpen.

I changed my mind. Not only would I not jump on this morning's bandwagon, I think if I were long these shares that I would take advantage of short sellers forced to chase the stock this morning and make a sale. That entry for goodwill. I just don't like it.

Get an email alert each time I write an article for Real Money. Click the "+Follow" next to my byline to this article.
TAGS: Investing | Stocks | Technical Analysis | Trading | Cannabis

Tilray Isn't Going to Get That High

TLRY posted promising earnings, but don't expect it smoke past its current levels for long.

Cannabis is about the only space where I'm long, and that isn't for technical reasons.

2021 Year in Review: A Very Good Market for Mega-Cap Stocks... But Not Much Else

The broader market had a very tough go of it in 2021, but you wouldn't know it unless you do some digging. From Reddit and Diamond Hands to SPACs and a stealth bear market, it's been a wild ride.

Precious Metals and Cannabis Could Surprise to the Upside in 2022

And there are a few ETFs and a silver miner that could provide the vehicles to play this hunch.