The legalization of hemp as a result of the passage of the 2018 Farm Bill has turned the product into a good old commodity. With that comes futures and options trades so that farmers can better manage their crops and producers can control their raw costs.

The issue with hemp is that it isn't just another crop. While futures trades could happen this year, the product isn't standardized and the prices are all over the place.

The market is exploding as it seems hemp-derived cannabinoids (CBD) are showing up in just about every consumer-packaged good product available. A new report from Bank of America Merrill Lynch estimated the potential average annual spend on CBD in the U.S. at $1.9 billion today, but growing to $11.5 billion by 2032.

New Leaf Data Services has announced that its Hemp Benchmarks is now collecting, assessing and reporting on the wholesale price of biomass, dry flower, clones, seeds, crude hemp oil, refined hemp oil and CBD isolate. Hemp Benchmarks is soon going to be expanding its price assessments to cover additional end markets for hemp fiber and grain and will begin to report on international markets too.

"With the passage of the 2018 Farm Bill last year, the hemp market is poised for massive growth with unprecedented interest from farmers, processors and consumers, fueled in part by the extraordinary demand for CBD-based products. Industry participants will be seeking price transparency to analyze and navigate what we believe will be a dynamic and chaotic market as the projected supply and demand for hemp and hemp derived end-products comes into focus over the next few years." said Jonathan Rubin, CEO of NLDS.

The Bank of America report looked at the U.S., Europe and Canadian CBD markets and estimated that the combined three account for $6.6 billion in spending today and that could grow to $39.2 billion by 2032.

Rubin has been personally visiting farms and speaking with farmers to get the price information needed. These new assessments expand NLDS's portfolio of benchmarks, which include more than eighty weekly benchmarks covering the wholesale price of cannabis in legal U.S. and Canadian markets through its previously established Cannabis Benchmarks division. 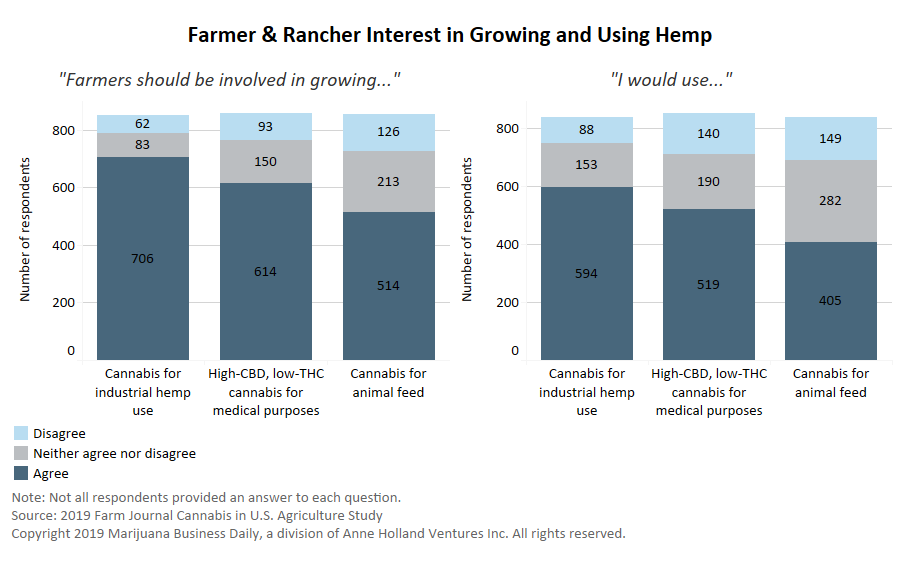 Hemp farming has been approved in 42 states and each month these existing states continue to loosen the restrictions. In the past couple of months, Michigan farmers have been cleared for a 2019 harvest and Oklahoma has approved its farmers to expand into commercial hemp production. North Dakota lowered its hemp farming fees and lifted a ban on CBD production.

Texas recently passed a measure that would "regulate the commercial production of hemp and would establish the intent of the Legislature that the state have primary regulatory authority over the production of hemp and hemp products in Texas." In addition to allowing farmers to grow hemp, the measure would allow CBD to be added to foods, drugs and cosmetics, stating that cannabinoids from hemp are "not considered controlled substances or adulterants." Texas retailers would be protected from product seizures and any retailers selling CBD must be given "fair notice" of any CBD infractions before products could be taken.

Colorado has the most hemp acreage, followed by Kentucky and then Oregon. North Dakota is in fourth place followed by Minnesota according to a report by the Hemp Industry Association. These levels are just expected to continue to grow and as they do the financial instruments that are going to be created to work within the market will grow too. Traders will want to get in early to educate themselves on this market and make smart decisions.

Get an email alert each time I write an article for Real Money. Click the "+Follow" next to my byline to this article.
TAGS: Futures | Investing | Trading | Agriculture | Consumer Products | Cannabis

As legislation that would let pot stocks list on Nasdaq fails to take root, I'm cultivating other opportunities.

3 Buys I Made as the Trading Environment Improves

Good Stocks Are Hanging Out With the Wrong Crowd

Several names I like are slow fading due to disinterest in small-caps.

This Market Has 2 Problems Right Now

Just because the volume is lighter, it doesn't make the gains any less real.