In his second "Executive Decision" segment of Mad Money Tuesday night, Jim Cramer sat down with Justin Gover, CEO of GW Pharmaceuticals Plc (GWPH) , which has dropped nearly 14% this week as the cannabis stocks have fallen out of favor on Wall Street.

Gover said that GW Pharmaceuticals is in the best shape it's ever been. Epidiolex, the company's epilepsy seizure drug, is now available in 28 countries and is addressing the needs of 500,000 patients that suffer from seizures. Gover added that Epidiolex has opened the door for the rest of their pipeline, which includes treatments for illnesses beyond epilepsy.

Cramer said GW Pharmaceuticals is being pulled down by inferior companies in their space, and he continued his recommendation.

Let's check out the charts of GWPH.

In the daily bar chart of GWPH, below, we can see a rally from late December to a spike high in early May. Over the past five months GWPH has retraced more than half of the previous rally and could be on the way for a complete round trip. Prices are below the declining 50-day moving average line and the 50-day line just crossed below the 200-day line for a dead or death cross -- a sell signal followed by some moving average fans.

The On-Balance-Volume (OBV) line made a high in May and is nearly back to its December low, telling us that sellers of GWPH have been more aggressive since late May.

In the bottom panel is the 12-day price momentum study, which shows that from August to September the rate of the decline has slowed. This is a bullish divergence but probably not big enough to warrant a reversal.

In the weekly bar chart of GWPH, below, we can see that prices are well below the still rising 40-week moving average line.

The weekly OBV line has turned down and the MACD oscillator is well below the zero line in sell territory. Nothing positive looking here.

In this Point and Figure chart of GWPH, below, we can see the long decline and a potential downside price target of around $82. 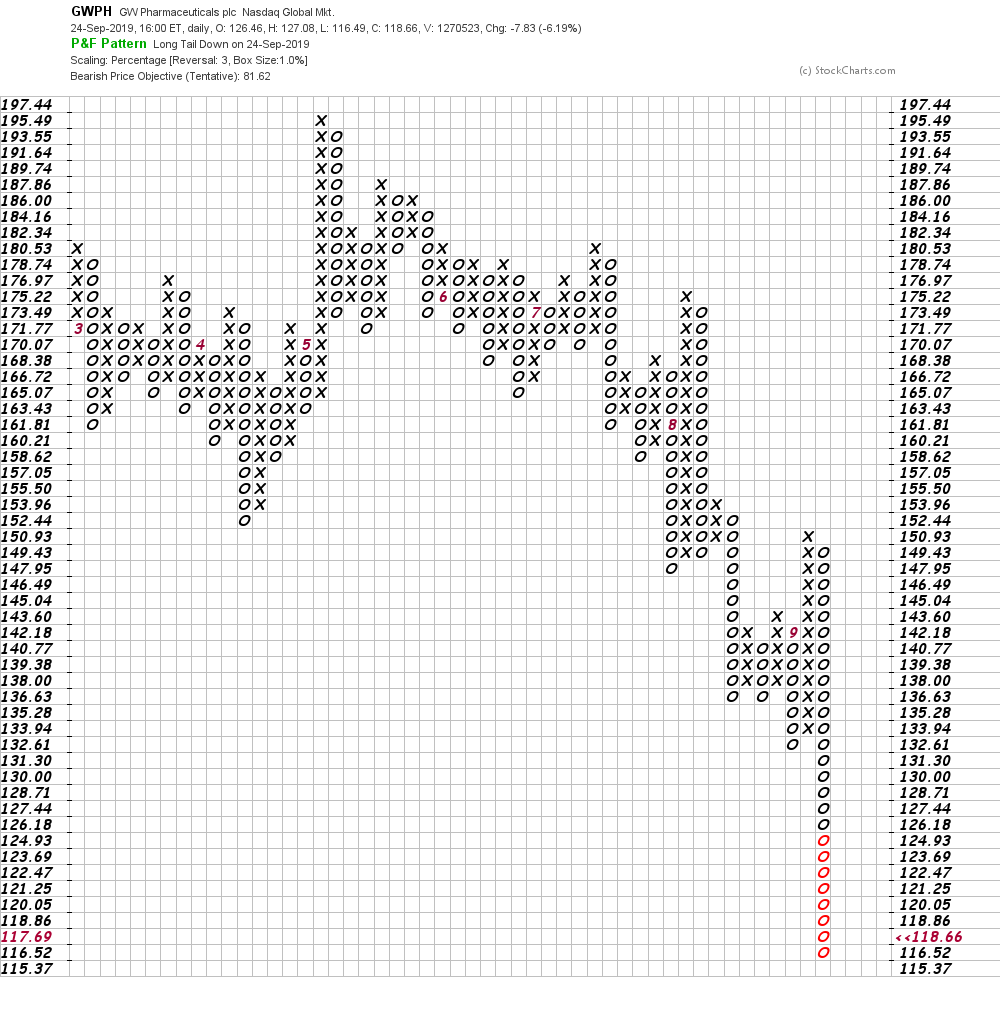 Bottom-line strategy: With prices down around $70 in the last few months a bounce to the upside is always possible, but the overall picture suggests that GWPH could fall still further with the low $80s as the price target. Avoid the long side.

Get an email alert each time I write an article for Real Money. Click the "+Follow" next to my byline to this article.
TAGS: Investing | Technical Analysis | Pharmaceuticals | Mad Money | Executive Interview | Cannabis

For Burned Out Cannabis Investors, Here's Hit of Optimism and a Trade Idea

If you have a trader's mentality, there's a setup here worth watching.

I'm Interested in Constellation Brands, Just Not in Love

Question: Would you rather buy the beer or the stock?

I'm looking for a continuation of strong pockets of speculative action.