The waterfall of capital in the cannabis industry has slowed to a trickle over the past year. According to the Viridian Cannabis Deal Tracker, the number of M&A transactions fell by more than 65% over this period. Viridian attributed the drop to the weakened state of public companies as stock prices plummeted and companies could no longer write blank checks or use common shares as currency.

Instead, SPACs have become the big player in the market. Special Purpose Acquisition Corporations, or SPACs, are created by a group of investors in order to acquire a business. It is often used by a larger private company as a way to become a publicly traded entity. It's a bit more complicated than an IPO (initial public offering) or a Reverse Takeover of another public company. The draw is that these SPACs often show up with a big pile of cash and founders can quickly see a return for all their hard work and sacrifice. With the more than $2.5 billion raised by SPACs in the cannabis industry, there is more buying power in the market that is fueling new M&A activity.

Viridian recently hosted a webinar on the subject, which many investors may not be as familiar with. There are constraints in SPACs that aren't in other investment vehicles. Ruth Epstein of Tuscan Holdings said, "You have three months to get the deal done. You need two years of audited financials and corporate governance with independent board members. That's a hard bar to jump for many cannabis companies." In addition to the time limitations, the SPAC has to spend 80% of its funds on one transaction.

Another constraint is that cannabis SPACs that list on the NYSE or Nasdaq cannot buy federal illegal businesses in the U.S., even if they are legal at the state level. This means that non-licensed ancillary cannabis businesses and U.S. hemp businesses that are federally legal are big targets. Akerna (KERN)  is an example of a non-plant touching ancillary business that went public through a SPAC.

Since many of these SPACs are raising huge sums of money, the potential pool of acquisitions is limited. Two groups, Collective Growth (CGROU) and Greenrose Acquisition (GNRSU) have both raised $150 million. Viridian noted that between March 2019 and May 2020, 11 cannabis and hemp focused SPAC IPOs raised more than $2.6 billion. That's more than all of the cannabis/hemp IPO activity in 2018 and 2019 combined.

It demonstrates the amount of demand for this type of investment from family offices and institutional investors. Epstein said, "It is a buyers' market. If you want capital and you want to be in the public market, this is it. We are the only game in town."

James Mendola of Mercer Partners said, "It can be an enticing vehicle for an entrepreneur who doesn't want to lose control." The option of a private company selling to a larger public company can often mean the founders get booted out or employees get laid off. Mendola also confirmed that since he had earlier success with a SPAC he can pick and choose which investors he wants along for the ride. "We want people that will stick around. Akerna saw a lot of investors sell right away and they ended with little cash."

Brian Kabot of Stable Road Capital agreed with Mendola that companies like rolling into a SPAC where they maintain more control and stay in charge of their companies. He said, "Our job is to find a great deal. A great company with solid management that investors will vote in favor of. Companies that are free cash flow positive." 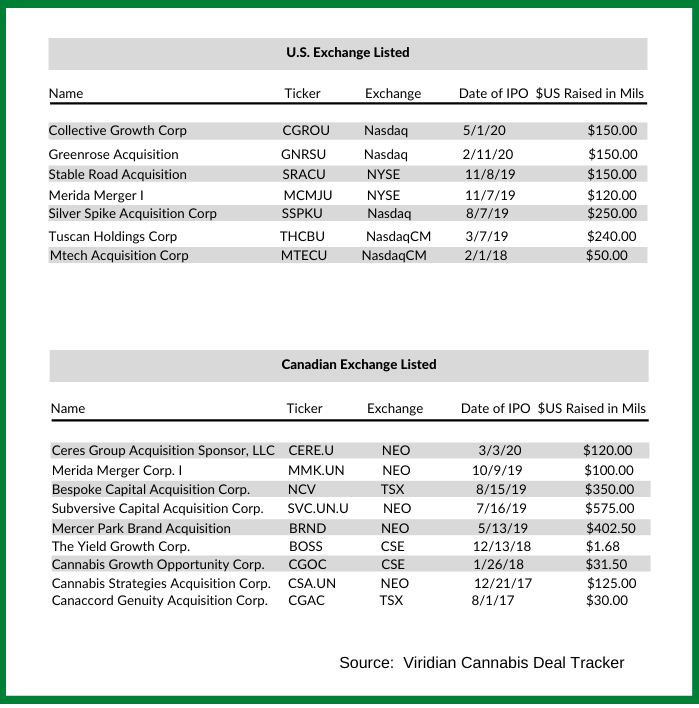 The most recent SPAC is Collective Growth led by Bruce Linton, as Chairman and CEO. If the name sounds familiar that's because Linton served as Chairman and CEO of Canopy Growth (CGC) . Linton will be joined by Geoffrey Whaling, as President, Tim Saunders, as CFO, and Wilson Kello, as Chief Marketing Officer, all having recently worked for Canopy. It is specifically targeting CBD companies. SPAC Insider wrote, "We already have six SPACs out currently searching for targets within the cannabis sector. Collective Growth will be the seventh. Plus, three of those six SPACs are $150 million in size, which is the same size as Collective Growth, with a fourth SPAC at $120 million. That's a lot of fish trying to feed in the same pond."

No doubt many of the private companies of a large size in the cannabis industry must feel a little like a contestant on "The Bachelor". Hoping to persuade one of these SPACs to get them the rose.

Get an email alert each time I write an article for Real Money. Click the "+Follow" next to my byline to this article.
TAGS: IPOs | Mergers and Acquisitions | Economy | Investing | Markets | Stocks | Trading | Cannabis

As the Market Struggles to Bounce Back, Here's My Game Plan

Many stocks are very oversold, and sentiment is about as bad as it gets.

A New Pot ETF Just Lit Up, So Let's Get Deep Into the WEEDs

Here we'll hash out the differences among cannabis players and see high how Roundhill Investment's The Cannabis ETF can go.

Pressure on fertilizer supplies due to sanctions against Russia because of the war in Ukraine makes the potash producer a star performer in a down market.

I Wouldn't Go 'All In' on Tilray, But Here's How I'd Trade It

Tilray is okay in my book for speculation.