Aphria (APHA) fired the first shot of cannabis earnings in 2020 -- and it missed. In fact, it missed badly once investors factor in guidance.

Still, Aphria should come out of this all right, and this dip is nothing more than giving up Monday's move higher. In fact, I think it's an opportunity to buy if your timeframe extends beyond the spring.

Guiding the full-year range lower by C$75 million after only missing by C$10 million this quarter doesn't paint a pretty picture for the year, but investors need to remember the bulk of Aphria's revenue is actually led by CC Pharma in Germany. This offers us little insight on the cannabis side of the business after Germany's government changed its medical reimbursement model.

As far as cannabis rolls, things don't look tragic. The company's adult cannabis revenues hit C$29 million with net cannabis revenues of C$33.7 million. Those adult-use cannabis numbers are up 46% quarter over quarter as the company cashes in on Broken Coast, its very popular brand. Despite the net loss of C$7.9 million, Aphria did turn in a positive C$1.9 million adjusted EBITDA.

Management blamed the temporary ban on vaping products in Alberta, slower retail rollout, and delay in the now-licensed Aphria Diamond facility for weighing on margins. All-in cost of C$1.98 still trends toward the high side of the industry while cash cost to produce fell to C$1.11. Fortunately, with almost C$500 million in the bank along with a C$80 million credit line, the company sits in good position to expand. 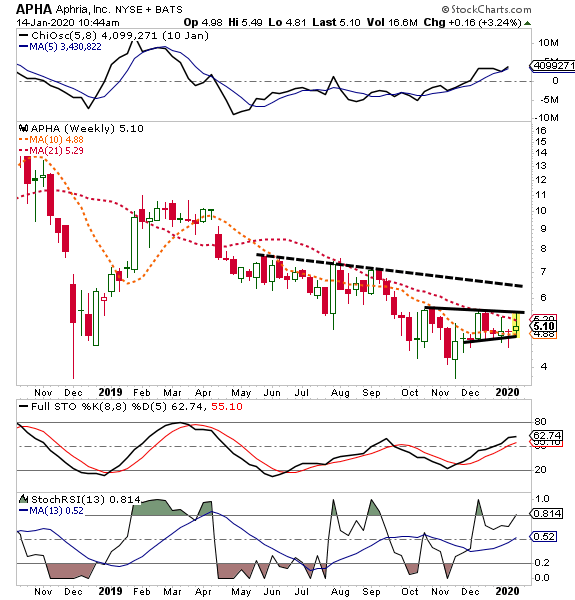 Perhaps the most interesting takeaway for Aphria's results is the company indicated demand exceeded cannabis supply, yet adult-use price dropped to C$5.22/gram from C$6.02/gram. I expect supply to continue to be swept up, but as legit companies compete with the black market as well as each other, don't expect price to push higher. Producers will be forced to cut costs and streamline operations to remain in the game.

With its strong balance sheet and a touch of business diversity thanks to CC Pharma, look for Aphria to remain a major player in the industry.

Get an email alert each time I write an article for Real Money. Click the "+Follow" next to my byline to this article.
TAGS: Earnings | Fundamental Analysis | Investing | Trading | Canada | Cannabis

Those that could quickly pivot may earn a new set of customers.

Cannabis Covid-19 Bump May Not Be Enough for Marijuana Suppliers

Customers rushed to stock up on cannabis as states imposed stay-at-home orders, but a protracted loss of foot traffic in stores would hurt.

Push to make marijuana-related products 'essential items' could save the business amid coronavirus outbreak.

Deep in the Weeds of the Covid-19 Outbreak, Cannabis Cos. Adapt to Survive

As covid-19 causes a drag on industry -- both in vape cartridge production and canceled conferences -- some areas of business are rolling along.