It doesn't have the star power of former politicians on its board of directors or flashy videos by Hollywood directors, but Cresco Labs Inc.  (CRLBF) is quietly and methodically building itself into one of the largest cannabis companies in the country. The company prefers to let its numbers speak and eschews the flash of other cannabis companies.

The company recently reported its earnings and along with its results, Cresco presented a slideshow of statistics. In it the company claims to be the number two cannabis company by market capitalization using Canadian dollars as its currency. At C$5.5 billion, it only trails Curaleaf Holdings  (CURLF) , which is listed as having a market cap of C$5.7 billion. As an aside, Curaleaf announced on Wednesday morning that it was acquiring Cura Partners in a $948 million all-stock deal, further expanding its reach.

The company is located in 11 states with 23 production facilities. It has 22 operating retail locations with 56 retail licenses and products in 725+ dispensaries. With over 56 brands, the company has something for everyone and that is the secret sauce of this unassuming company.

There are two analysts covering the company according to Yahoo Finance and both have buy recommendations. The average price target is $15.04 and the company is currently trading at $12.92.

A recent Bank of America Merrill Lynch report initiating coverage on the cannabis industry noted that brands matter: "We see a 2016 study by BDS as telling, showing that the top 5 brands accounted for roughly half the market in Colorado, and between 20-70% in Washington and Oregon, all three states early to legalize recreational cannabis use." With so many brands on the market, consumers will begin to gravitate towards the ones they know best just like traditional packaged consumer goods.

BDS Analytics wrote in a recent report, "We think the landscape in the not-too-distant future might resemble the coffee bean market, which once was dominated by unbranded beans but now is heavily branded by individual coffee roasters. Will we see pot brands as prominent as roasters like Blue Bottle or Peet's? Probably not next year, but the trend seems inexorable - the branding of flower is well underway."

Some of Cresco's top brands include the Mindy's Artisanal Edibles, whose brand ethos is high quality desserts with no cannabis flavor, created by the acclaimed pastry chef, Mindy Segal. The brand is known for its cookies and brownies. Then there's also Mindy's Kitchen which makes cannabis infused fruit chews.

Reserve is a premium brand whose brand ethos describes its customers as highly selective and who turn to RESERVE for a luxury experience in cannabis. "They are knowledgeable about cultivation and lineage, extraction and hardware. RESERVE delivers a superior cannabis experience for those who are looking for truly top shelf cannabis," says Cresco.

The following chart breaks down the wellness products into good, better and best categories, and the adult use of cannabis products fall into a similar breakdown. The portfolio includes some of the best known brands like Bhang chocolates, Humboldt's Finest, Henry's Original and the up and coming Kurvana vape pens. 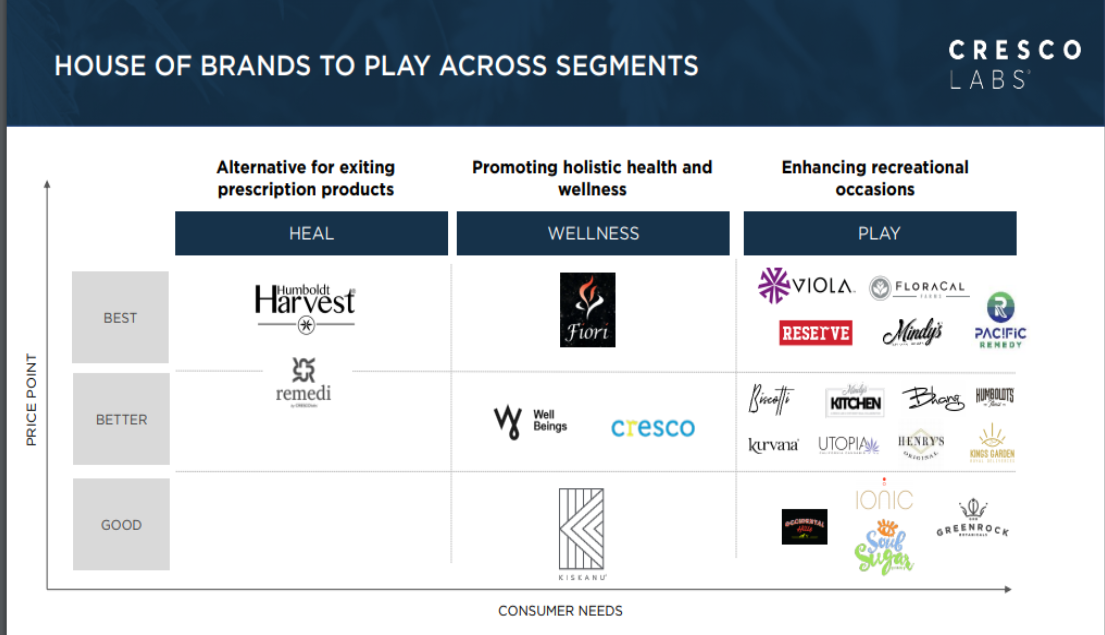 Cresco Labs was mostly known as a northern company with a footprint in the northeast. The company just recently made a power move and acquired California's Origin House (ORHOF) , formerly known as CannaRoyalty. This gives the company a quick entry into the state which is projected to have a $7.7 billion cannabis market by 2022. With 600 dispensaries in its distribution network, Origin House brings a 60% market penetration.

The company said in its presentation, "We will be the largest distributor in California, with more access to consumer data and retail storefronts than any other player in the industry. We will fill our dominant distribution pipeline with California brands, driving national and global opportunities as well as sustained competitive advantages."

While Michigan is relatively new to the legal adult use cannabis scene, it is expected to become a dominant market once commercial sales are allowed. This is expected in 2020. Arcview Research has forecast that Michigan's current market size in 2018 is $869 million and that it will grow to $1.4 billion by 2022. Cresco said it is retrofitting an existing 100K+ square foot cultivation and processing facility in the state and has two dispensary applications pending, with four more anticipated.

Its operation in Florida is under the VidaCann label. Cresco will be able to open 35 dispensaries and currently operates eight dispensaries with plans to have 14 by the end of June 2019, expecting 20 by the end of 2019. The company noted that 95% of the population of Florida is within 50 miles of a VidaCann dispensary.

Cresco stock has been steadily climbing throughout the year. The 52-week low is $4.19 and the year's high is $14.39. As the company begins to post the Origin House results as real numbers and not pro-forma, more investors will tune in to this quiet company. Sometimes flash isn't needed when the numbers speak for themselves.

(Please note that due to factors including low market capitalization and/or insufficient public float, we consider several names mentioned to be small-cap stocks. You should be aware that such stocks are subject to more risk than stocks of larger companies, including greater volatility, lower liquidity and less publicly available information, and that postings such as this one can have an effect on their stock prices.)

Get an email alert each time I write an article for Real Money. Click the "+Follow" next to my byline to this article.
TAGS: Earnings | Investing | Markets | Stocks | Trading | Canada | Cannabis

Kass: One Man Gathers What Another Man Spills

Too often we debate markets with the same source of dogma and lack of objectivity that exists in our political debates.