Live From New York...only kidding. Target (TGT) earnings got messy before they were even reported. On Monday, the firm announced that the in-person analyst meeting in New York City would indeed be cancelled due to concerns over the outbreak of the coronavirus. Instead, the firm would hold a webcast where fourth quarter results would be discussed.

Prior to the opening bell on Tuesday morning, Target released the firm's fourth quarter financial performance. Before we dig in, you will recall that way back in January, Target had let investors know that the firm had experienced a less robust holiday season than had been anticipated, but that apparel and beauty had performed. That's important because the results and guidance offered today are quite mixed.

The firm posted adjusted EPS of $1.69, beating consensus by four cents and growth of 10% year over year. Revenue for the quarter landed at $23.4 billion. This number was good for growth of 1.8%, but in fact fell just short of expectations. Within those numbers, comparable sales increased by 1.5% at stores open for at least one year, in-line with what the street was looking for. Transactions grew by 1.3% for the quarter, but the average ticket only grew 0.2%. Gross margin and operating margin both grew.

One "not so hot" result that sticks out for me is in digital sales. Within those 1.5% comp sales is 20% growth in digital sales. Target states that same day service as well as online order pick-up accounted for more than 80% of comp (digital) sales growth. For the full year, comp sales grew 3.4% including 29% growth in digital meaning that e-sales growth slowed alongside slowing sales growth for the brick and mortar stores. For comparison, eCommerce sales at Walmart (WMT) increased by 35% for the fourth quarter.

The firm did provide guidance which to me is an incredibly difficult venture for any firm right now. While Target was indeed among the bevy of retailers that experienced a dramatic surge in consumer demand over the weekend due to the public's anticipated expected impact of the coronavirus on the U.S. economy, this is the very reason why making forward looking statements regarding both demand and supply is now an uncertain game.

Target guides Q1 EPS toward a range spanning $1.55 to $1.75, basically throwing a dime around consensus. For the full-year, EPS is now guided toward $6.70 to $7, dragging the mid-point slightly below the $6.87 that the street was looking for. As for Q1 comp sales, Target expects to see low single digit growth in percentage terms. That's more or less in-line with the 2.6% consensus view.

I came in short March 20th $100 puts, thinking that maybe I could get some at a discount and get paid to do it after earnings. After all, I do have a high opinion of CEO Brian Cornell, and I know that he and his team will navigate this now more difficult environment. That said, I am losing my faith that if the shares reach that price. They will be at a discount to what they are worth when they get there. The shares were trading up small in the early going on Tuesday, and I am more likely to take a profit on those puts than to wait for the premium to disappear. 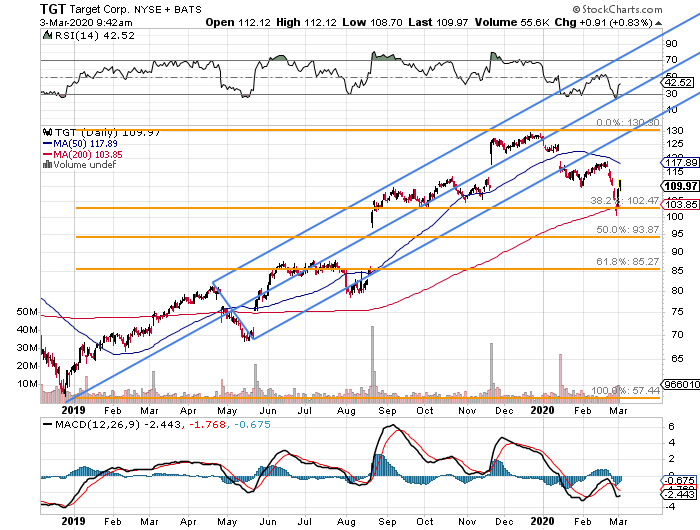 Investors will see that when the holiday sales season had been reported, this stock's year long Pitchfork model did indeed crack. That said, it also appears that everyone's favorite 12th century Italian mathematician was around to catch the fall at a rough 38.2% retracement for the December 2018 to December 2019 move. You could also credit the 200 day SMA for that support.

Can the shares break out to new highs? Technically, yes, but there will be a challenge as the shares approach the 50 day SMA at 118. Me? I would rather be long either Amazon (AMZN) , which I am, Costco (COST) , which I am, or Walmart WMT, which I am not.

Get an email alert each time I write an article for Real Money. Click the "+Follow" next to my byline to this article.
TAGS: Earnings | Investing | Stocks | Technical Analysis | Trading | Retail | Consumer Products | Stock of the Day | Coronavirus