Chirico said it's time to start calling things like they are. 2020 will be a mess of a year and there will be no "business as usual."

The analysts shouldn't have been surprised at PVH's earnings miss, as their only "clean" month was February. Sales remain down 25% on average and stores that are open don't need to restock as much.

Cramer said PVH should be bought as it's going to be the survivor in this group.

Let's visit with the charts again before looking to be a buyer of this name that was downgraded by TheStreet's Quant Ratings service on Friday.

We looked at PVH back on April 2 and had a dim outlook writing, "Shares of PVH have been in a downtrend for a long time. I see no bottoming action on the charts or from the indicators. Avoid."

In this updated daily bar chart of PVH, below, we can see that early April turned out to be a low on the chart and prices zigzagged higher into June. PVH managed to rise above the now bullish 50-day moving average line but stopped short of the underside of the declining 200-day line.

The trading volume has remained active but the On-Balance-Volume (OBV) line with its simple math (volume is added to a running total if the stock closes higher and subtracted if the stock closes lower) has been moving sideways which tells us that buyers and sellers are more in balance.

The Moving Average Convergence Divergence (MACD) oscillator did not cross above the zero line until earlier this month but has since moved towards a take profits sell signal.

In this updated weekly bar chart of PVH, below, we can see a less than robust picture. Prices are still in a longer-term downtrend and the rally to date is still shy of crossing the bearish 40-week moving average line.

The weekly OBV line only showed improvement in May and the MACD oscillator has only crossed to the upside for a cover shorts buy signal on this time frame.

In this daily Point and Figure chart of PVH, below, the chart still shows a potential upside price target of around $83, but the "straight down" pullback suggests we will see prices retest the mid-$40's or lower. 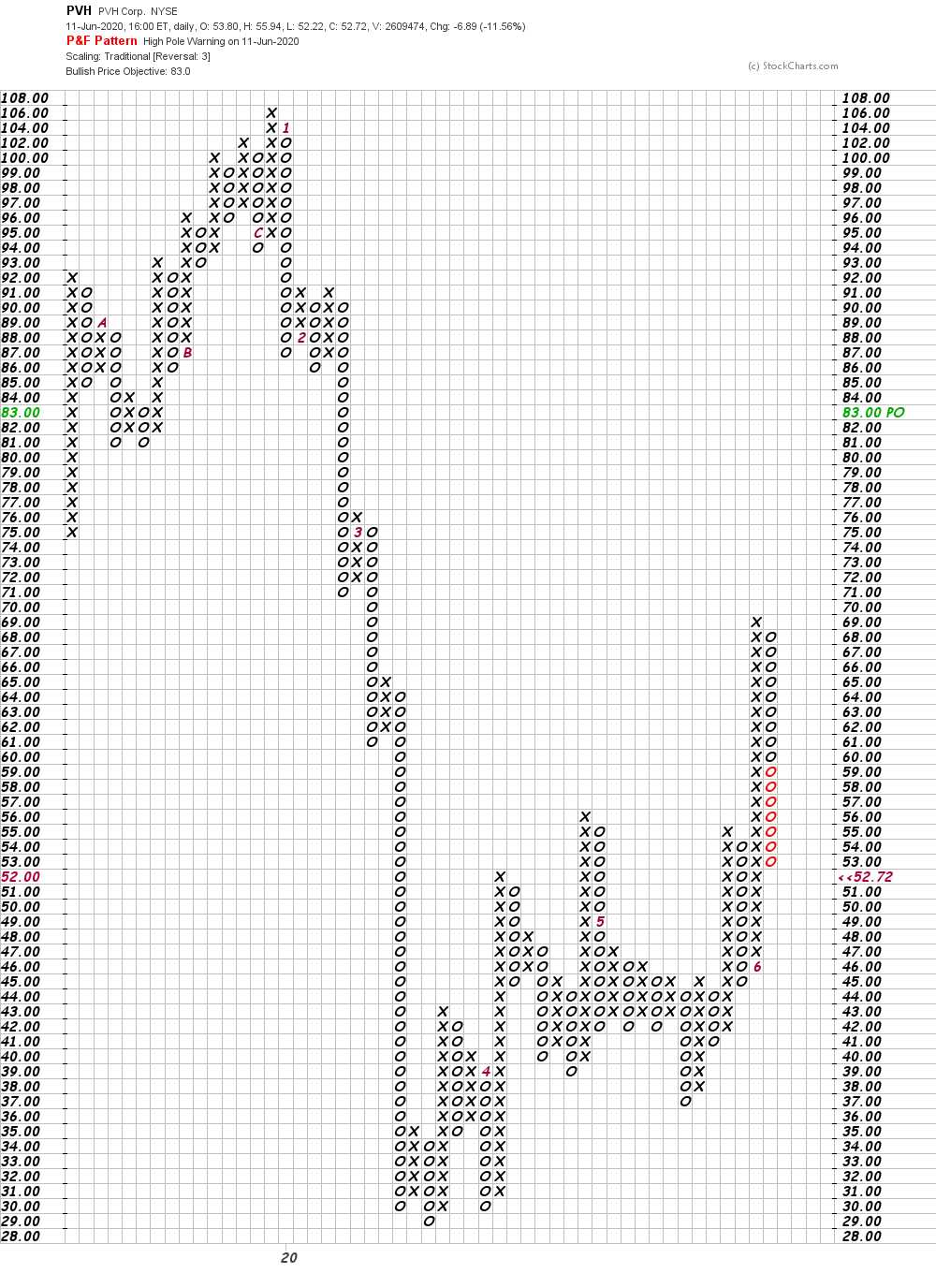 Bottom line strategy: Will PVH be a survivor in the world of retail? Is there light at the end of the tunnel with the pandemic shut down? The charts cannot answer that but PVH still needs to build - and retest - a bigger base pattern to launch a sustained uptrend.

Get an email alert each time I write an article for Real Money. Click the "+Follow" next to my byline to this article.
TAGS: Earnings | Economy | Investing | Stocks | Technical Analysis | Trading | Apparel | Retail | Mad Money | Executive Interview