Miller said Denny's is open, clean and ready for business. The chain has partial inside dining available at 521 of its locations, with takeout and delivery available at the remainder. They are taking all safety precautions.

When asked how franchisees have been coping with the pandemic, Miller noted that 70% of their franchisees own fewer than five locations, so they've been focused on raising liquidity and taking advantage of government programs. Miller said 96% of Denny's locations are franchised and just about all of them now have delivery service available via third-party providers.

In this daily bar chart of DENN, below, we can see that prices have been in a decline from September and the decline got worse from early February. DENN has rallied above the 50-day moving average line but its slope is still negative and so is the slope of the 200-day moving average line. Trading volume was very heavy into the late March low and has stayed more active than average.

The On-Balance-Volume (OBV) line has moved up and down with the price action and is now close to breaking above the high made back in September.

The Moving Average Convergence Divergence (MACD) oscillator is moving sideways just below the zero line - this is not telling us that the trend in DENN is strong or durable.

In this weekly bar chart of DENN, below, we can see more negative signals than positive signals. Prices are still below the declining 40-week moving average line.

The weekly OBV line has been in a decline from September of last year and is still pointed down telling us that in this time frame that sellers are still more aggressive.

The weekly MACD oscillator has narrowed in recent weeks but a cover shorts buy signal looks to be still more weeks away.

In this daily Point and Figure chart of DENN, below, we can see that the software has projected a potential upside price target of $21. This is a good recovery but not new highs. A trade at $12 is needed to refresh the pattern and turn it more positive. 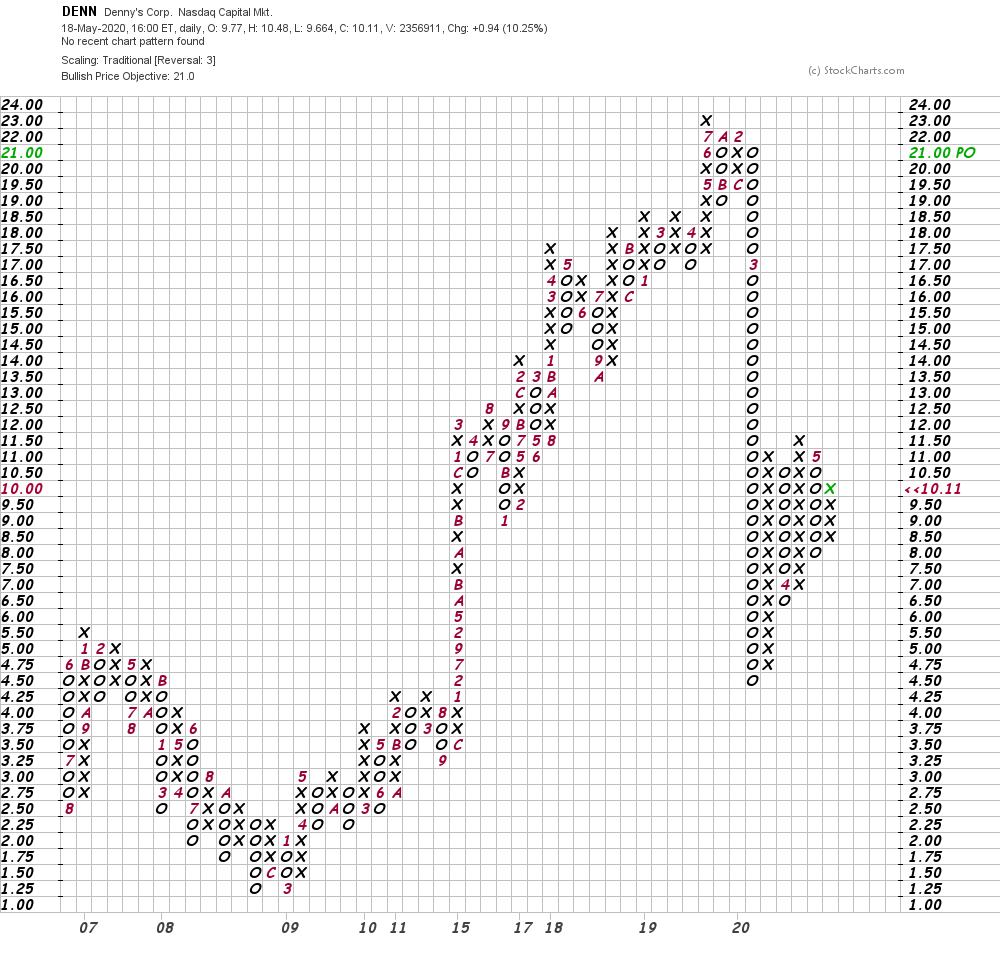 Bottom line strategy: DENN may have seen the worst and lived to talk about it, but that does not make it a buy. I want to see a much broader base pattern before recommending a long position.

Get an email alert each time I write an article for Real Money. Click the "+Follow" next to my byline to this article.
TAGS: Economy | Investing | Stocks | Technical Analysis | Trading | Restaurants | Mad Money | Executive Interview | Coronavirus