In his final "Executive Decision" segment during Monday night's Mad Money program, Jim Cramer sat down with Joe Papa, chairman and CEO of Bausch Health Cos. (BHC) . BHC was formerly known as Valeant which topped out in 2015 and subsequently fell sharply.

Papa explained that Bausch has increased their research and development spending and is once again focused on innovation and organic growth. Bausch's announcement last month that they're buying Synergy Pharma for $200 million appears to be one more step in that direction.

When asked about the company's leverage, Papa admitted that they're still over-leveraged, but they have a plan to get out of the debt by growing earnings. Lastly, Papa talked about Lumify, their latest product for relieving redness in the eyes. He said Lumify launched in May and already has 25% market share in the category.

Let's put aside the fundamental story and check out the charts and indicators now. The charts were helpful in 2015 at the zenith.

In this daily bar chart of BHC, below, we can see a positive looking chart pattern until November. From a March low around $15 BHC rallied to the $28-$29 area by early October. A lower high was seen in November and prices broke a number of lows into late December. Even though prices slumped from around $28 to nearly $17, we did not see volume expand on the downside.

The daily On-Balance-Volume (OBV) line dips a little in the second half of December before rising again. The overall direction of the OBV line from March is positive and suggests that investors have held their positions. Prices broke below the rising 200-day moving average line in mid-December and have since rallied back above it.

In this weekly bar chart of BHC, below, we used a log scale to display the price activity. When looking at a long period of time or at a security that has traveled a great distance in points or dollars, a log scale is often preferred.

In this chart we can see a big decline from above $90 to nearly $8. From the 2017 "near death" low prices have moved up. Volume was heavy in 2016 and early 2017 as reluctant and discouraged longs probably dumped their positions. Volume is much lower as prices have recovered a bit and that is not a healthy sign.

Despite the low volume the weekly OBV line has moved higher since April 2017.

The weekly MACD oscillator is hugging the zero line and a turn higher, should it happen, would be positive.

In this Point and Figure chart of BHC, below, we can see a huge decline into a low in early 2017. Hopefully the price action is fresh accumulation but a rally to $29 is really needed for an upside breakout. A decline to $17.50 would be bearish. 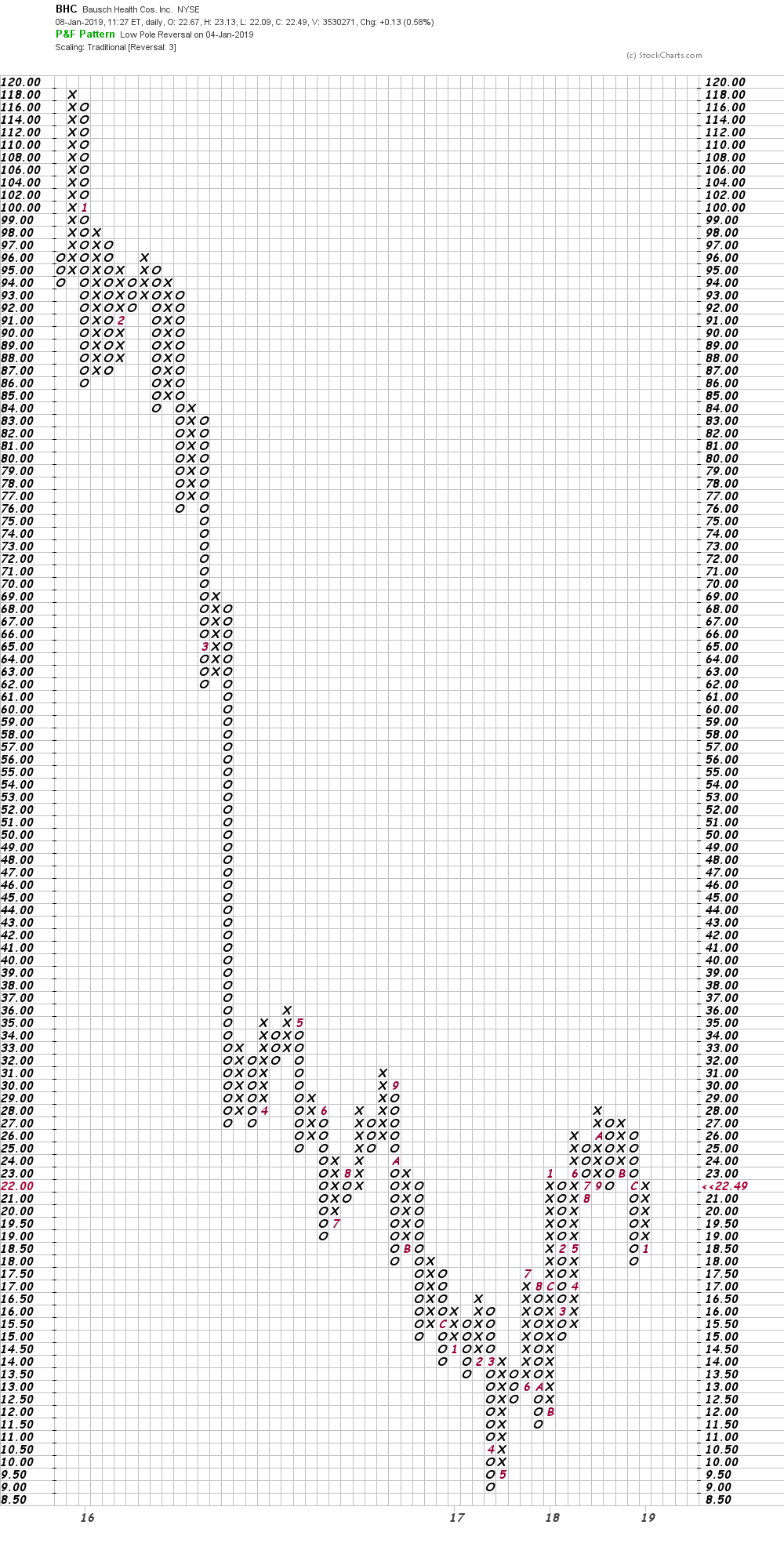 Bottom line strategy: I am a little "gun shy" of BHC but the chart picture is more positive than negative. If you can afford to risk down to $17.50 you could probe the long side of BHC on a shallow dip under $22. If that is too much risk for you then wait for a move above $29.

Get an email alert each time I write an article for Real Money. Click the "+Follow" next to my byline to this article.
TAGS: Investing | Technical Analysis | Trading | Biotechnology | Healthcare | Pharmaceuticals

Salesforce's Earnings and the Slack Deal: 7 Important Things That Were Shared

The FATMAAN tech names, semiconductors, and software all saw some positive rotation.

Jim Cramer: A Great Market Is One That Can Ignore Negative News Entirely

The fact is that business in whole areas of the economy remain very strong despite what you heard about ZM this morning.

Avoid the long side until the dust settles.

Olin Corp Can Trade Higher After Some Consolidation