It would appear, with something like 64% of the state vote tallied, that Californians have passed the much talked about "Proposition 22". What this does in short is allow app-based transportation and delivery providers Uber (UBER) and Lyft (LYFT) to operate to some degree in the way that they already have been in exchange for a couple of concessions. Basically, drivers can remain independent contractors and not employees. Analysts such as Dan Ives at Wedbush had indicated that by forcing these businesses to take on these workers as employees with full benefits would end up adding between $440 million and $500 million in expenses for UBER, and a potential $300 million in expenses for LYFT.

In short, the new law, in effect since early this year would have completely changed the business model, and the firms had already expressed the intention to pass on increased costs to customers. The trade-off appears to be that these firms will now have to offer their contractors sick time, minimum earnings and vehicular insurance.

The shares are trading much higher. As of the timing of this writing, UBER was recently up 14% after trading almost a full percent higher on Tuesday. LYFT was also up 14% after a 1.7% increase on Tuesday. Just an FYI... UBER reports this Thursday after the closing bell. Consensus is for EPS of $-0.49 on revenue of $3.18 billion. LYFT reports next Tuesday, November 10th (Semper Fi). The street looks for EPS of $-0.90 on revenue of $488.8 million.

While this polling took place in California, this issue is not just Californian. Similar regulatory challenges are still in differing stages of development across a number of U.S. states as well as in the UK. There is now, however, an election based precedent in rejecting a law already on the books. Does that matter going forward? Probably. It surely matters this morning.

While I order from UBER Eats at least once a week due to convenience, or if I was just too busy to make dinner, I think these businesses will be unable to fully blossom until the economy reopens safely and stays open. I mean, food delivery is a tough, competitive, low margin business. Transportation is where the action is. Point A to Point B, or simply finding a responsible way home from the bar. Well, who on earth, while the pandemic still rages unabated, is going to hang out in a bar, or accept a ride home from a stranger in a strange vehicle. I don't know how I caught Covid, and I never will... but it very well may have been from a car service driver that I had last March who was clearly ill. The rest was/is history. That said, I can not buy these names on this pop. My expectation is that based on past history, you will get a chance to get a better price. 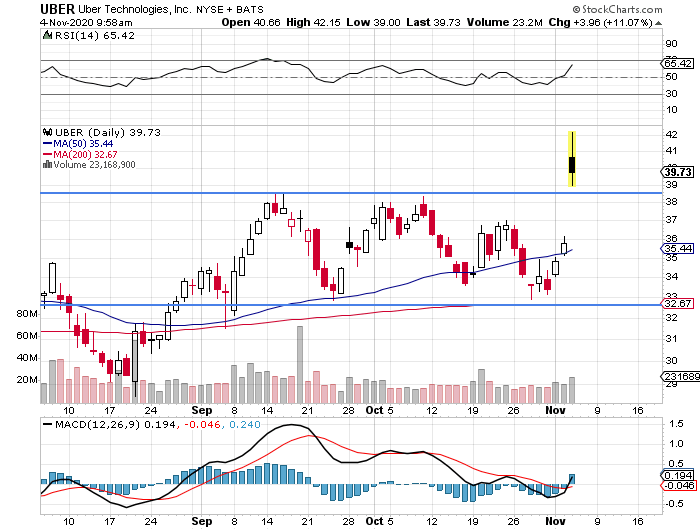 UBER broke out of a two month basing pattern this morning, but this breakout created a gap. The shares look to possibly be testing past resistance as support since the bell rang. I need to see support there. I don't see that, I would expect the gap to fill possibly post earnings. That's the $37 level, gang. I think selling November 6th $37.50 puts for $0.50 this morning looks more attractive than the equity ahead of earnings. Just the way my mind works. 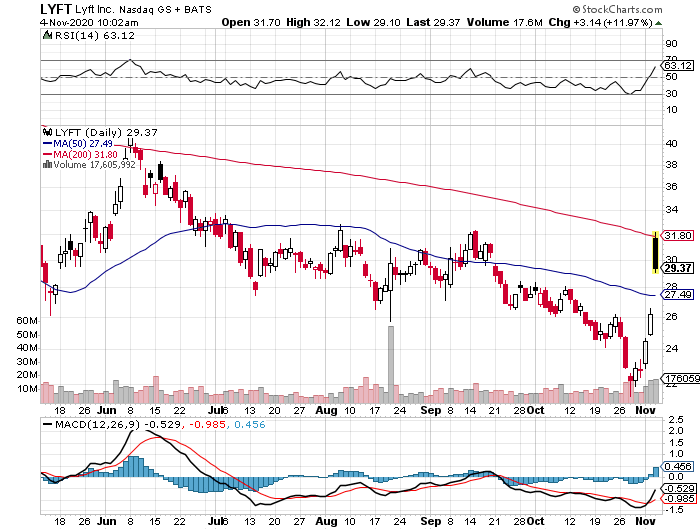 LYFT hit stiff resistance at the stock's 200 day SMA this morning, also creating a gap that might need to be filled. With those earnings next week, I think that rather than grab the equity, I would be more likely to maybe purchase November 13th $32 calls for $0.90, and finance it (and more) through the sale of November 13th $27 puts for a rough $1.15. Not risk free, but certainly risk reduced.

Get an email alert each time I write an article for Real Money. Click the "+Follow" next to my byline to this article.
TAGS: Investing | Options | Stocks | Technical Analysis | Trading | Transportation