Cabot Corp. (CBT) was mentioned during the fast-paced Lightning Round of Jim Cramer's Mad Money program Monday night. One viewer called in about a company and Jim replied, "Cabot Corp. is the one you want to be in." Let's check out the charts and indicators of CBT.

In this daily bar chart of CBT, below, we can see two large trends over the past 12 months. First is a large sideways trend from December to October. Prices moved between $54 and $68. In October prices started a downtrend breaking below $54 and extending down to $46. Prices are below the declining 50-day moving average line and below the negative 200-day moving average line. The daily On-Balance-Volume (OBV) line stayed mostly in a sideways trend until early October. The weakness in the OBV line the past two months tells us that sellers became more aggressive. In the lower panel is the Moving Average Convergence Divergence (MACD) oscillator which has turned up to a cover shorts buy signal.

In this weekly bar chart of CBT, below, we can see a bearish story for now. Prices broke a two year uptrend. CBT is below the declining 40-week moving average line. The weekly OBV line has been in a decline for several months and the MACD oscillator is far below the zero line.

In this Point and Figure chart of CBT, below, we can see a downside price target of $40.15 but we can also see that a rally to $50.51 will improve the chart. 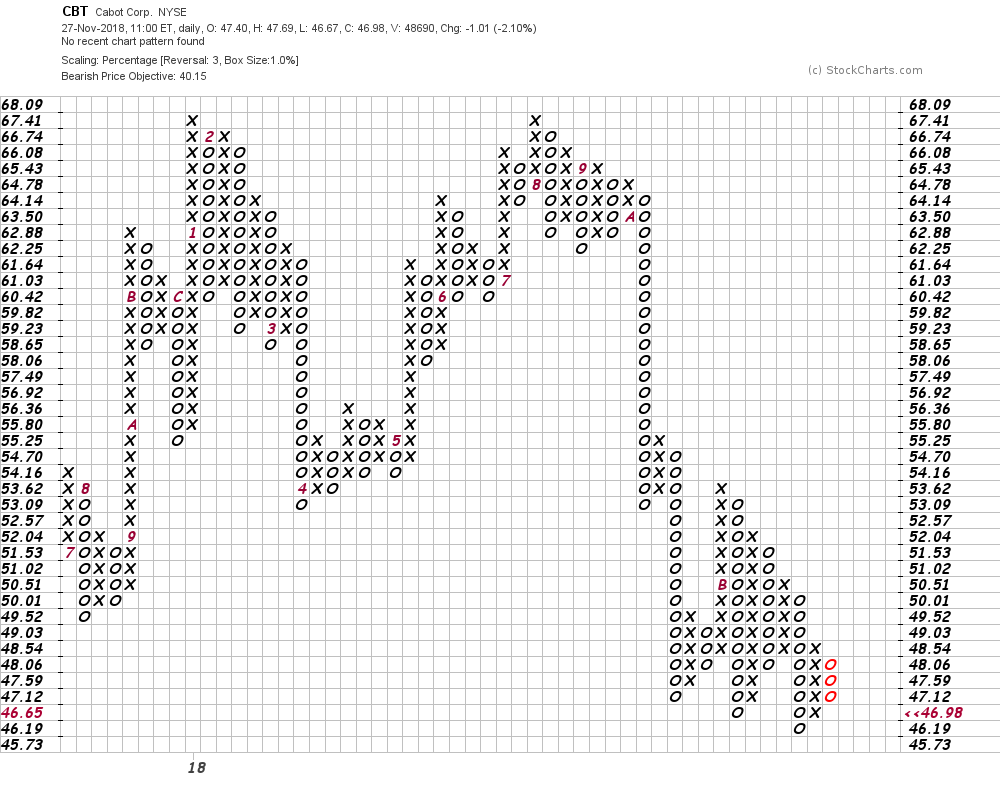 Bottom line strategy: CBT made just a slight new low in November versus October. This does not qualify as a bottom or a buy signal but it is a good start. Put CBT on your shopping list. Get ready above $50 and buy above $54.

Get an email alert each time I write an article for Real Money. Click the "+Follow" next to my byline to this article.
TAGS: Investing | Chemicals