Well, if you've been waiting for a pullback to buy, we have both the (SPY) and (QQQ) trading around their 50-day simple moving average (SMA).

Buying pullbacks is, admittedly, one of the greatest challenges. If you check out something like the five-minute intraday chart, you'll see non-stop selling pressure from around 10:15 am EST until 11:45 am EST. A few short-term intraday bottom signals hit shortly after 11:45 am EST, but if this turns into a trend day, those signals won't equate to much upside.

In terms of the broader picture, neither the Nasdaq nor the S&P 500 has been able to get any kind of traction over the past 10 days. I imagine many contemplating a buy here will hesitate to pull the trigger. It's our nature to buy higher highs and avoid lower lows. Or even the initial bounces on pullbacks. The problem becomes knowing when you're wrong.

So, no, you shouldn't buy the low of the day. If you do indeed catch the low of the day, then you were lucky, not good. What buyers should look for is a bounce off the bottom with some push through a previous congestion area. The prior low then acts as a point of reference. If we trade below those levels, then you need to be on high alert or even stepping out of the position. And this philosophy applies to both intraday and daily setups.

For instance, if we use the QQQ five-minute chart as an example of the concept. The first attempt at stabilizing the drop came around 10:30 am EST. While other secondary indicators didn't line up for a buy for me, maybe they did for someone else. However, when we closed at a new low that was lower than all three of the previous bars, a trader should have been put on alert. The downside opened up, so risk management and capital preservation alerts should have been ringing.

An hour later we found ourselves in a similar position. This one has more secondary buying indicators for a bounce play in the form of bullish crossovers in the parabolic stop-and-reverse as well as the Full Stochastics indicators. Even still, that doesn't change my need to watch those lows. As I'm typing this, the bounce stopped around the high on that chart and already retraced to the $280 level. Should we fall under $279.40 and close below that level on a five-minute chart, then recent buyers need to be very careful. 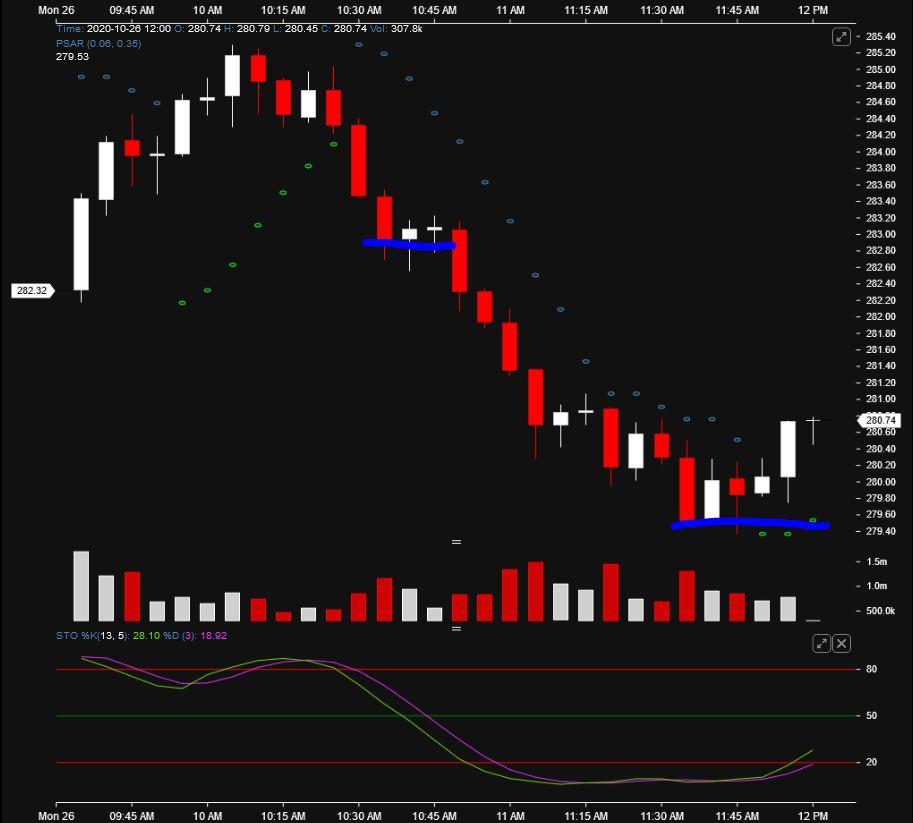 This can be applied to any time frame. This isn't about trading a five-minute chart, but about buying pullbacks whether they are intraday, overnight, or over weeks.

I started outlining names on Friday I would consider buying early this week if the pullback continued. We have the pullback so far, but now I want to see some signs of a bottom. It's important to note "a bottom" does not mean "the bottom." A bottom is simply what I outlined: it is a reference point to acknowledge when I'm probably wrong and my risk to capital has increased. This is part of having a trading plan, and I think it will be paramount for the fourth quarter of 2020.

This is a huge earnings week piled on top of an election that has only a little more than a week left before we hit climax. Given the huge voter turnout we've seen already, it's safe to say that this one may fall into the historic category. There's absolutely nothing wrong with playing it conservative for another seven to 10 days. That will continue to be my approaching until I see a shift in sentiment and the technical picture.

The Divine Ms M and I Agree -- traders and investors should stop trying to make fetch happen.

The Top 10 Ways Traders Deceive Themselves and Others

Untruths run rampant in the world of trading.

3 Potential Stock Plays for the Week Ahead

Keep an eye on these three to play on the long side.

Has the Homebuilders ETF Rolled Over?

When too many people point out something I wonder whether the trend is overdone.