The Good With The Bad, Mostly Bad

You've heard of PVH Corp (PVH) , no? Okay... let's try again. How about Tommy Hilfiger, Calvin Klein, or Van Heusen? There you go. The firm released their fiscal first quarter financial performance on Wednesday evening. The good news is the firm reported EPS of $2.46, good enough for a one penny beat. That's pretty much it. Now for the bad news. Those wearing un-hedged long equity positions should probably sit down at this point.

PVH went to the tape with quarterly revenue of $2.36 billion. Though that presents as year over year growth of 2.2%, this was slightly lower than what was broadly expected. The firm lowered guidance for both second quarter and full year profitability. For the full year 2019, the firm took EPS expectations down just a dime, to a range spanning from $10.20 to $10.30. They must be thinking that they'll experience one heck of a second half, because that's not really so bad in comparison to the Q2 guide-down, which was rather dramatic. For the second quarter, PVH now looks to earn $1.85 to $1.90 per share, versus the $2.40 that Wall Street had been looking for.

One thing that I think you can say about PVH CEO Emanuel Chirico is that he seems to put it out there. Whatever it may be. The quote making the rounds this morning went like this: "Looking ahead, the volatile and challenging micro-economic backdrop has continued into the second quarter, with particular softness across the U.S. and China retail landscape. Additionally, further volatility in foreign exchange rates is expected to pressure our full year earnings per share by an incremental $0.10 compared to our prior expectations." The take-away? China. Dollar strength. Problems. Hey, at least he didn't blame the weather.

I thought this interesting... Chirico appeared on Mad Money last night with Jim Cramer. When Jim asked him about the current state of tariffs, with an implication that this condition could worsen, he responded "That is not the issue going forward... What we are seeing is a slowdown in growth, and a slowdown in retail sales." He then added, "We've really seen some softness in the business." I don't think a lot of CEOs would be so honestly blunt, and it really kind of makes you want to root for the guy, and his company. But.. not if it doesn't make sense.

Chirico might not be worried about China. Perhaps he should be, for two reasons. One, retailers as an industry have been severely punished by investors in response to the trade war. Whether or not deserved, ETF flows both penalize and reward broadly, letting the specifics fall into place later. Two. PVH is exposed. In 2018, the firm sourced a rough $400 million worth of inventory from China to include the majority of apparel, accessories and footwear.

The firm does understand that as multinational large cap, dollar strength is a problem that does not seem to go away. Earnings will for the foreseeable future experience this reality to their detriment. 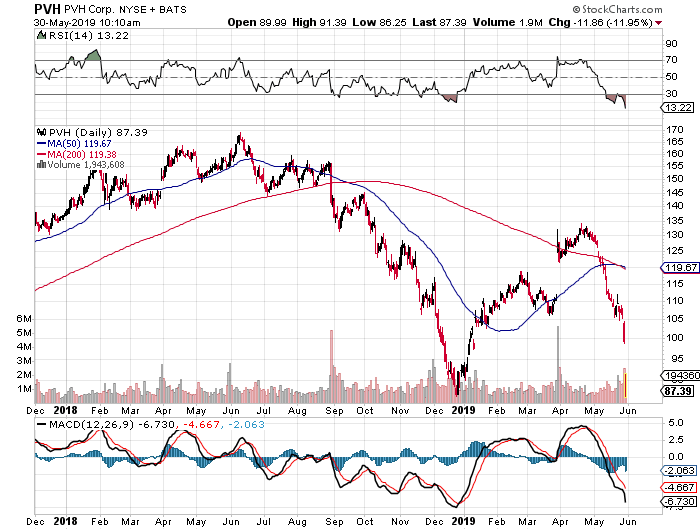 Incredibly, though the 50 day SMA is currently moving in step with the 200 day SMA at $119 and change, it is now very likely that the condition is short-lived and the 50 day will be pulled below the 200 day, maybe even by day's end. This will amount to what will appear to be a second consecutive death cross, without really experiencing the benefit of a golden cross somewhere in between. I don't know if I can explain how hard that is to accomplish. What it tells me, as a trader who comes in without an interest, is that the risk, even after this overnight beat-down is very possibly still to the down-side.

If someone were to ask me today if I thought that they should buy the dip here, I would suggest observing the "three day rule". It's not like the dividend is tempting, so that is not an issue.

Get an email alert each time I write an article for Real Money. Click the "+Follow" next to my byline to this article.
TAGS: Earnings | Investing | Markets | Options | Stocks | Technical Analysis | Trading | Retail | China | Stock of the Day