The headlines have been painful.

Not only has the environment become much tougher for cryptocurrencies and their exchanges, the prospects for a quick rebound are probably more pedestrian in nature than they might have been in the past, as both monetary and fiscal conditions have changed dramatically. Not to mention an economy doing its best impression of a pea rolling off of the table.

Of course, occurrences like this, that were broader than just Celsius, invite increased regulation.

- The FOMC moves toward a series of relatively large interest rate increases coupled with the methodical withdrawal of liquidity as the monetary base shrinks in size.

If lots of easy, cheap money was good for cryptocurrencies (and all risk assets), then it stands to reason that not so easy money at more expensive borrowing costs will not be quite as good. Maybe even poor.

JP Morgan (JPM) Analyst Kenneth Worthington wrote, "The extreme decline in the price of cryptocurrency markets in 2Q22 combined with Coinbase's (COIN) ramp in investment would appear to not only make it challenging for it to generate a profit in the near future, but also to meet its annual loss cap of $500M of annual EBITDA."

Coinbase Global announces an 18% reduction in headcount in order to better manage expenses. CEO Brian Armstrong wrote... "We appear to be entering a recession after a 10+ year economic boom. A recession could lead to another crypto winter, and (it) could last for an extended period."

One Has To Wonder

On the morning of the Fed's next policy decision, and as Bitcoin and Ethereum tested $20K support and $41K support respectively, why would one invest in not only cryptocurrencies but in a firm like Coinbase Global? We have already seen the likes of MicroStrategy (MSTR) and Tesla (TSLA) suffer just for holding Bitcoin on their balance sheets. Well, for Tesla it's about the balance sheet. For MicroStrategy the holdings are bigger than the business.

Coinbase Global is a self described tech financial technology company providing not just technology but infrastructure to the cryptocurrency industry. The firm offers both retail and institutional customers a marketplace for investing and trading cryptocurrencies, as well as an ecosystem for developers to build crypto-based applications and for all to accept crypto-assets as a medium of transaction.

One would have to believe in cryptocurrencies as a growing asset class. We have already seen the collapse of NFTs (Non-Fungible Tokens), as those are in a way collectibles. They are worth something if you like them. Worth absolutely nothing if you don't. Anyone who traded baseball cards back in the day knows that your stack of Mickey Mantle's and Willie McCovey's were only worth what the buyer would pay, usually for a lot less than the magazines that covered the hobby at the time quoted your cards at.

So, What About The Underlying Product?

What are cryptocurrencies worth, really? Not the hype price, but what do they do? What are they good for? Go back to school for a minute. What are the three characteristics of money?

Money needs to act as a store of value.

Money needs to act as a unit of account.

Money needs to act as a medium of exchange.

Money needs to be easily divisible.

Let's single out Bitcoin. Store of value? Absolutely not. Too volatile. Unit of account? Bitcoin can do that. Medium of exchange? Not a chance. Divisible? Yes. Okay. Two out of four, but not the two I see as probably the most important. Bitcoin is not money yet. Maybe not ever.

To be fair, let's give fiat a run. Store of value? Not always. Unit of account? Definitely. Medium of exchange? Definitely. Divisible? Yes. Three and a half out of four. I honestly don't love the concept of fiat. I would rather back currency with a hard asset, but fiat is indeed money.

Let's do Gold. Store of value? It's just been tested against inflationary prices and a rising US dollar. Gold is definitely a store of value. Unit of account? Not really. Medium of exchange? Not in the modern era, but has proven the ability. Divisible? Yes. Is Gold money? No. Could gold be money? More easily than could Bitcoin as it does not require the electrical grid to work to perfection at all times in all regions.

On May 10th, Coinbase reported the firm's first quarter results. Coinbase posted a GAAP EPS loss of $1.98 per share on revenue of $1.16B. The revenue print was "good enough" for year over year "growth" of -35.6%, while both the top and bottom line numbers badly missed expectations. For the current quarter, Coinbase is expected to report in early August. Wall Street sees a GAAP EPS loss of about $2.30 per share, with a range of $-3.05 to $-1.02. On the revenue side, Wall Street consensus is for about $967M, within a range of $578M to $1.16B. At consensus, the revenue print would represent a 45% contraction from the same period one year ago.

For the three month period ending in March, Coinbase "drove" free cash flow of $-3.86 per share leaving the balance sheet with $6.123B in net cash. This was down about a cool $1B from December. Current assets dropped about $1.4B over those three months to $16.94B. Current liabilities add up to $10.921B, leaving the firm with a current ratio of 1.55. Though that ratio appears to be in decline, this is a healthy ratio. Coinbase can meet its short to medium term obligations.

Total assets amount to $20.895B, including $1.299B in "goodwill" and other intangibles. I do not see that as abusive. Total liabilities less equity adds up to $14.399B including $3.386B. Coinbase could omit all intangibles from its balance sheet without upsetting the balance. Coinbase could also pay off the firm's long-term debt out of pocket. This is not a bad balance sheet at all. The firm's fundamental problem is the cash-burn, and as mentioned above, CEO Brian Armstrong is addressing this through a reduction in overhead.

If one can see a future in cryptocurrencies, beyond the onset of this current "winter", then one can also see a place for firms that provide an ecosystem for that asset class. One must also be fully cognizant that the reserve currency central banks will at some point recognize cryptos as a threat to their global power. That may be what you like about cryptos. That is also why the central banks with the power of regulation on their side, will make the environment for this asset class much more difficult than it has ever been in its embryonic stage.

If you can see a sunnier day on the other side of this storm, I will not call you wrong or misguided. I will just say that I don't see it as clearly as you do. For your sake, I hope you are right and I am wrong. That said, I will not be getting involved in direct ownership of cryptos alongside you, unless a purpose for the asset class beyond mere speculation emerges. So far, it has not. 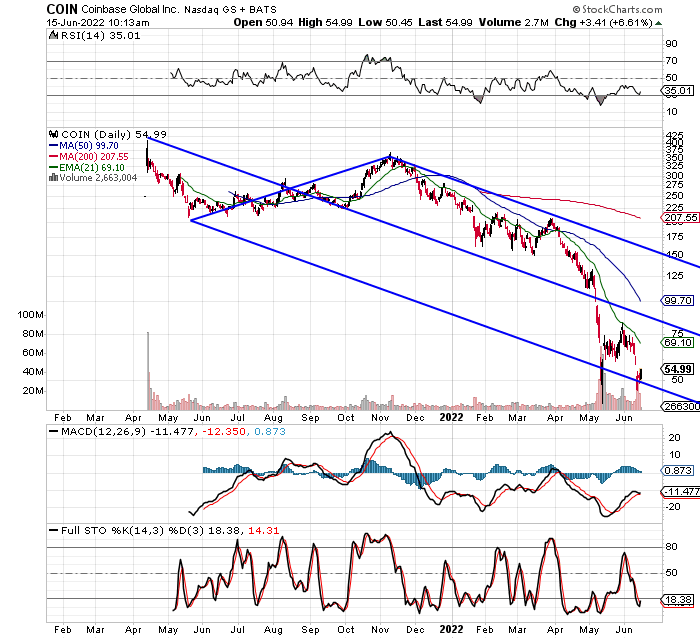 Buy here? I'm not. You could. It would be speculation. As long as that is understood, I don't see a problem. I also do not see a problem in short-term trading COIN or cryptocurrencies themselves. As for investment, as I have mentioned, the company seems to be well-managed. They just need to make money. That's a big "just"... for me, I have better things to do with my cash. I think.

Get an email alert each time I write an article for Real Money. Click the "+Follow" next to my byline to this article.
TAGS: Bitcoin | Investing | Markets | Stocks | Technical Analysis | Trading | Cryptocurrency