'Twas the night before earnings, and all through the house, not a conglomerate was stirring, except for Warren Buffett's Berkshire Hathaway (BRK.A) , (BRK.B) . It was to be the news ahead of the news. Bloomberg News reported on Tuesday evening that Berkshire Hathaway had sought permission from the Federal Reserve to increase it's stake in Bank of America (BAC) above the 10% threshold. This news has been well received by the marketplace, though the truth is that Berkshire already holds a 9.96% stake, and in filing this application with the Fed, Berkshire states the intention to invest passively while not trying "to force a change in structure or corporate structure" at Bank of America.

It was called a flash comment, but after the Berkshire news broke, but before the firm released it's quarterly numbers, highly touted Wells Fargo (WFC) banking analyst Mike Mayo commented. Mayo maintained his "outperform" rating on Bank of America as well as his $34 price target. Though Mayo is uncertain of whether the Fed will grant the permission requested, he notes the positive symbolism, as well as the firm's efficiency, and it's lower risk profile.

Bank of America went to the tape with the firm's third quarter financial performance on Wednesday morning. The firm posted adjusted EPS of $0.75, or GAAP EPS of $0.56, both exceeded expectations. Revenue came in at $22.8 billion, good enough for minimal growth of 0.4% year over year, and more importantly good enough for another beat. That adjusted number excludes a joint venture impairment charge of $7.5 billion that was worth $0.75 per share.

The numbers within are mixed to good, real good in some spots. Consumer banking was solid, as it has been across the industry. BAC realized net income of $3.3 billion (+3%) on revenue of $9.7 billion (also +3%). Global wealth and investment management net income posted at $1.1 billion, and an 8% increase. Loans were up 5%. Deposits up 3%. Sales and trading revenue increased 7% to $3.2 billion, largely on the strength in equities, where a 13% rise resulted in a contribution of $1.1 billion. Fixed income, currencies and commodities posted a flat $2.1 billion contribution to the whole.

Most importantly, at least to me as an investor, is tangible book value. That number as of the quarter's end stood at $19.26 per share, up from $18.92 over three months. At the last sale that I see this morning of $30.39, the shares now trade at 1.58 times tangible book, which is relatively cheap in my opinion. 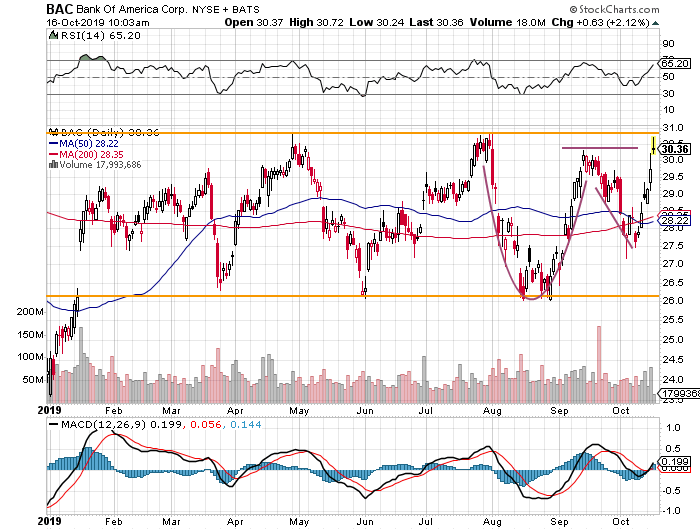 One might see the purple cup with handle that runs from late July through early October. That setup, now has the stock price breaking above pivot. However, if one pulls back, what they might also see is a year to date chart that has run a triple bottom, now accompanied by a triple top. Range bound? Maybe, and at least for me, I do not buy this name just yet. If May is right, and the stock breaks out, I think $36 is possible technically. A trader, I believe will have time to react.

On the other hand, if this name remains in the range of the past nine months, then it is indeed trading at the very top of the range.

Notes: This trader in this example has played the long side through purchasing the right to pay $31 in January when Q4 earnings are due. In that case, the trader would be long 100 shares at a net basis of $30.46, To finance this purchase, as well as bring in a little dough, the trader has exposed him or herself to to the risk of having to pay $26 (bottom of the range) for 500 shares at that time with the shares trading lower than that. This trader in that case would own the 500 shares at a net basis of $25.89.

Get an email alert each time I write an article for Real Money. Click the "+Follow" next to my byline to this article.
TAGS: Earnings | Investing | Options | Stocks | Technical Analysis | Trading | Banking | Stock of the Day | Warren Buffett