Almost incredible. Just a couple of nights after U.S. equities completed what was a rather negative week, after Russian forces seemingly appeared to get even more aggressive against both Ukrainian civilian and military targets, while taking the war to Poland's doorstep, and after Russia is supposed to have appealed to Beijing for military assistance, European equities opened higher across the board, as did U.S. equity index futures on Sunday night.

To be sure, there are still plenty of reasons for caution. The spread of the SARS-CoV-2 coronavirus worsens in China as Beijing is forced to shut down certain sections of key cities such as Shenzhen and Shanghai. This "zero tolerance" strategy may slow the spread, but certainly works against easing supply chain issues that have plagued global economies for well more than a year now.

In addition to the increasingly brutal war in eastern Europe, and Covid shutdowns in China, in the U.S., the FOMC decides on monetary policy this Wednesday afternoon. Futures trading in Chicago are now pricing in a 98% probability that in addition to getting started on draining excess liquidity from the balance sheet, the committee decides to increase the target range for the Fed Funds Rate from 0% to 0.25% to 0.25% to 0.5%. Then, the Bank of England, Monetary Policy Committee meets on Thursday.

Why the apparent overnight strength? Why the steepening yield curve? Perhaps, a story that "The Guardian" ran on Sunday has something to do with it. The Guardian reported that Ukrainian presidential advisor Mykhailo Podolyak had said that (cease-fire) talks (with Russia) had become more "constructive." Podolyak said, "We will not concede in principle on any positions. Russia now understands this. Russia is already beginning to talk constructively. I think that we will achieve some results literally in a matter of days." At the same time Reuters reported that Russian state owned media had quoted Russian delegate Leonid Slutsky as having said, "According to my personal expectations, this progress may grow in the coming days into a joint position of both delegations, into documents for signing."

Is this softening of the hard edge previously shown by the Russian side some kind of trick? Or is there something to it? We know that on Saturday, both French President Emmanuel Macron and German Chancellor Olaf Scholz, who participated in a call with Russian President Vladimir Putin, came away discouraged.

That said... We also know that Russia had appeared to back away early last week from demands for complete Ukrainian capitulation to demands for a cease-fire, Ukrainian recognition of the Crimean Peninsula as part of Russia, Ukrainian recognition of the Donetsk and Luhansk regions in the eastern part of the country as independent, and a Ukrainian constitutional amendment promising not to try to join any "western" alliances such as NATO or the European Union. In response, Ukraine had publicly considered committing to remaining neutral (not applying for NATO or EU membership), but an unwillingness to cede territory.

Enter China. Or Not.

A lot boils down to what China does here. Beijing has been slow to condemn Russia's aggression against a neighbor where quite obviously the civilian population had been targeted once the Russian army had proven itself ineffective and disorganized when in head to head combat with the Ukrainian military. Russia, effectively cut off from most of the civilized world at least economically, and perhaps in some desperation, reaches out to Beijing for military aid.

On that note, White House national security advisor Jake Sullivan is set on Monday (today) to meet with a senior Chinese government official. Sullivan has been clear, at least on social media... that "there will absolutely be consequences" should China help Russia evade sanctions. On the one hand, would China like to be a thorn on the West given the western stance on Taiwan's relationship with China? Perhaps. Then again, given China's place in the global economy, that after Covid has to be on shakier ground, would Beijing risk becoming the global pariah that Russia is now? That question, while key, is impossible to answer from New York in the middle of the night. Time will tell. Perhaps not too much time.

Of the 11 S&P sector SPDR ETFs, only Energy (XLE) shaded green (+2.15%) for the week. Seven of the 11 sector SPDRs gave up more than 2% for the week, while three surrendered more than 3%. Consumer Staples (XLP) lost a stunning 5.84% over the past five business days.

Interestingly, the week left room for both investor negativity and reason for optimism. Take a look at the S&P 500... 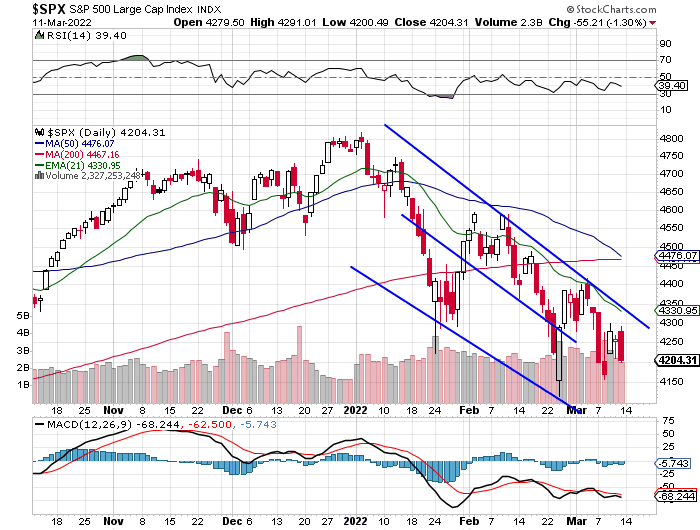 What readers will see is that as weak as last week felt, until a new low is made, after this index had made a successive new lower low in February, it has not (yet done so) in March. In fact, in March, for now, the index (if it holds) has made two successive higher lows. Before we get carried away with ourselves, the index has not yet made a higher high in 2022. That has to happen in order to break the "down" trend. That said, this game is not over.

As long as the lowest low, which came intraday on a high volume reversal, stands, the effort to bottom (and turn) the index is not dead. The fact that trading volume has in general been notably higher since February 24th, while the S&P 500 has really traded sideways... means (opinion) that there is real disagreement on market direction from here over at least the medium-term among professional decision makers.

Just beware, that even with futures trading higher overnight, and even if the market rallies on the open, that the 50 day SMA for the S&P 500 stands at 4476, while the 200 day SMA stands at 4467. This makes the likelihood of a "death cross" early this week very high regardless of Monday's market direction. Death crosses are seen as bearish indicators. They do not always work out that way, but be fully cognizant that there could be a market-wide algorithmic reaction, especially if coupled at the time with "lousy" news. Or an overly aggressive sounding press conference.

One would think that rising oil and gas prices and the possibility that these prices might be sustained at an elevated level moving forward would compress margins across almost all corners of the global economy. Yet, as FactSet reports, consensus for calendar year 2022 S&P 500 earnings has moved from growth of 8.6% to growth of 9.1% over the past week, while expectations for S&P 500 2022 revenue growth have moved from 8.4% to growth of 8.9%.

Just some more info, still from FactSet... Fourth quarter earnings (for the S&P 500) wrapped up at earnings growth of 31.2% on revenue growth of 16.1%, providing a net profit margin of 12.4%. Currently consensus for the S&P 500 for the first quarter is for earnings growth of 4.8% on revenue growth of 10.7%. JP Morgan (JPM) , Wells Fargo (WFC) , and Citigroup (C) all report either on April 13th or 14th. Just an aside, Wall Street sees a contraction in Q1 year over year earnings for four sectors... Staples, Communication Services (XLC) , Consumer Discretionaries (XLY) , and those Financials (XLF) .

Perhaps no single stock has more of an impact on overall index performance than Apple (AAPL) . In full disclosure, I remain long this name, but investors must understand the danger apparent. We all know that Apple posted a terrific quarter in late January. Impressive beats on both the top and bottom lines, a record setting top line, and equally impressive guidance. That said, the shares have experienced nothing but lower highs since the new year kicked off, forming what could be interpreted as a descending triangle, which is a bearish pattern... 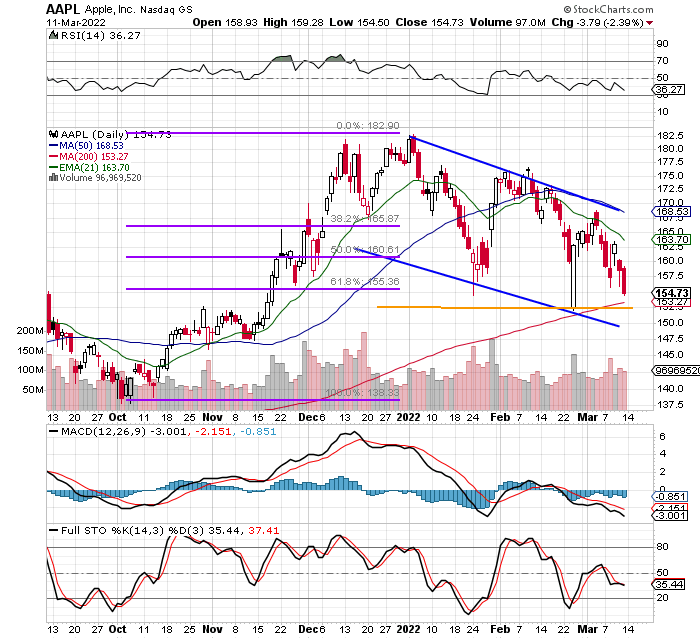 ... Or is it a falling wedge, which is bullish? I know I have shown you this before, but there has been no resolution, and the trajectory of the entire market over the short to medium term future very likely hangs in the balance. You are not going to find the answer in the usual stock specific indicators. They are all neutral. The answer lies either below the $152 level (for a continuance of trend) or above $169 (for a higher high than the March 3rd high). To tick at $152, AAPL has to trade below its own 200 day SMA ($153.27). AAPL has not traded below its own 200 day SMA since early June. Beware that in addition, a 61.8% Fibonacci retracement of the stock's October through early January run would land AAPL just above $155. Given that Fibonacci levels are area weapons and not sniper rifles, we are there.

Knowing all of this, also know that Apple smartphone supplier Foxconn has halted operations at its Shenzhen facilities as part for that city's attempt to slow the spread of Covid. Apple's main production hub is in Zhengzhou, and increasing production there could offset a loss of production in Shenzhen. That said, it won't be easy. An entire marketplace awaits.

Get an email alert each time I write an article for Real Money. Click the "+Follow" next to my byline to this article.
TAGS: Economic Data | Indexes | Investing | Markets | Stocks | Technical Analysis | Trading | China | Europe | Russia