At the Berkshire Hathaway (BRK.A) , (BRK.B) annual meeting this past weekend in Omaha, shareholders and analysts learned that the iconic investment company reported EPS that was down 51.5% year over year even though they were were better than analysts' forecasts. The share price was lower this Monday.

CEO Warren Buffett and vice chairman Charlie Munger fielded questions for about five hours. Munger took a question about Bitcoin and responded that "When you have your own retirement account, and your friendly adviser suggests you put all the money into Bitcoin, just say no."

Later on, Buffett weighed in: "Whether it goes up or down in the next year, or five or ten years, I don't know. But the one thing I'm pretty sure of is that it doesn't produce anything. It's got a magic to it, and people have attached magic to lots of things."

In this daily bar chart of the Bitcoin futures, below, we can see some subtle clues. Prices made a peak back in November and declined into late January. Futures steadied the past three months but trading volume did not increase and the On-Balance-Volume (OBV) line has moved sideways to lower the past three months.

That tells us us that sellers of Bitcoin futures have been slightly more aggressive than buyers. The 12-day price momentum study is not showing us any divergences to help in our analysis.

In this weekly Japanese candlestick chart of Bitcoin futures, below, we can see what I consider a bearish picture. Prices are trading below the cresting 40-week moving average line. The weekly trading volume has slowly declined from early 2021 which I find "interesting" despite more and more people and institutions recommending it.

The OBV line shows a decline from November telling us that sellers of futures have been more aggressive than buyers. The trend-following Moving Average Convergence Divergence (MACD) oscillator has been below the zero line in sell territory since January.

In this Point and Figure chart, below, we used a series of data of the cryptocurrency. Here the chart suggests a downside price target of $33,000. 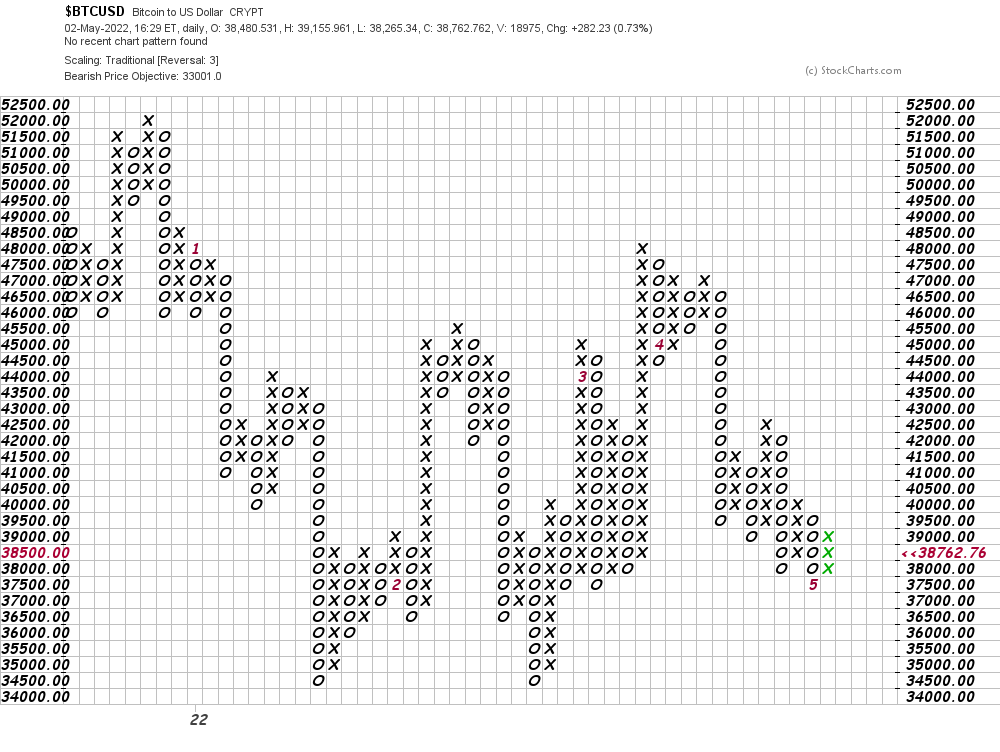 In this daily Point and Figure chart of the Grayscale Bitcoin Trust ETF (GBTC)  (which solely and passively invests in Bitcoin), the chart shows a $21 price objective. 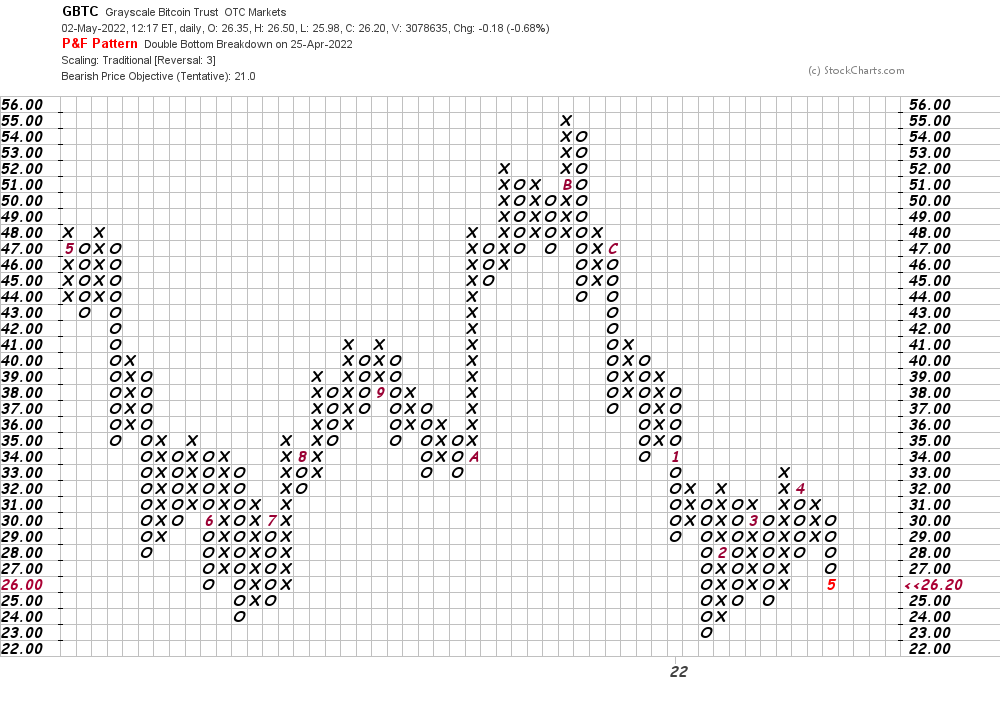 Bottom line strategy: While Buffett and Munger would recommend total avoidance of Bitcoin, Buffett's comment about "magic" suggests he believes it is all just sleight of hand. I would be a short-term trader if you put a gun to my head. Keeping that in mind, I would avoid the long side and be prepared for lower prices in the weeks ahead.

Get an email alert each time I write an article for Real Money. Click the "+Follow" next to my byline to this article.
TAGS: Bitcoin | Investing | Markets | Technical Analysis | Trading | Fintech | E-Commerce | Cryptocurrency | Warren Buffett