In his first "Executive Decision" segment of  Mad Money Monday evening, Jim Cramer spoke with Dr. Giovanni Caforio, chairman and CEO of Bristol-Myers Squibb (BMY) , the drug maker that on Monday announced the $13.1 billion acquisition of MyoKardia to bolster its cardiovascular offerings.

Caforio noted that it's been one year since Bristol acquired Celgene and the combined companies have made "great progress" towards advancing their strategy. MyoKardia's new drug could treat as many as 100,000 patients in the U.S. alone and Caforio said Bristol is the perfect company to take the drug through the regulatory process to bring the drug to market next year.

Bristol Myers remains committed to leading the charge against cardiovascular disease, Caforio said, but also toward rewarding their shareholders. Shares of the company are up 17% over the past year and Caforio added that they continue to have strong financials and are reducing debt as they work towards a balanced capital allocation plan.

Let's check out the charts and indicators of BMY.
In this daily bar chart of BMY, below, we can see that prices have swung up and down in a tighter and tighter high/low range all year. Prices have narrowed down towards an apex. BMY has crossed above and below the 50-day moving average line and the 200-day moving average line numerous times this year. (This is one of the faults of moving averages - they only work well in trending markets.)
The trading volume does not seem to reveal any trends but the On-Balance-Volume (OBV) line shows a pattern of higher lows so far this year. Despite a sideways trend, buyers of BMY have been more aggressive.
The trend-following Moving Average Convergence Divergence (MACD) oscillator in the lower panel shows us a similar pattern as this indicator oscillates around the zero line. The MACD oscillator is turning upwards now and we could get a fresh outright go long signal soon.  Maybe just as prices break out of this triangle pattern.

In this weekly bar chart of BMY, below, we get another look at this large triangle pattern. Prices are now below the declining 40-week moving average line but that may not last long.
The weekly OBV line is very impressive and bullish as it has been rising since the middle of 2019 and suggests a significant amount of accumulation (buying).
The MACD oscillator is just slightly above the zero line and could turn higher if prices break out on the upside from this triangle.

In this daily Point and Figure chart of BMY, below, we used a traditional even dollar scaling. Here the software shows a potential upside price target in the $75 area.

In this weekly Point and Figure chart of BMY, below, we used close only data. Here the software shows a potential longer-term price target in the $111 area. 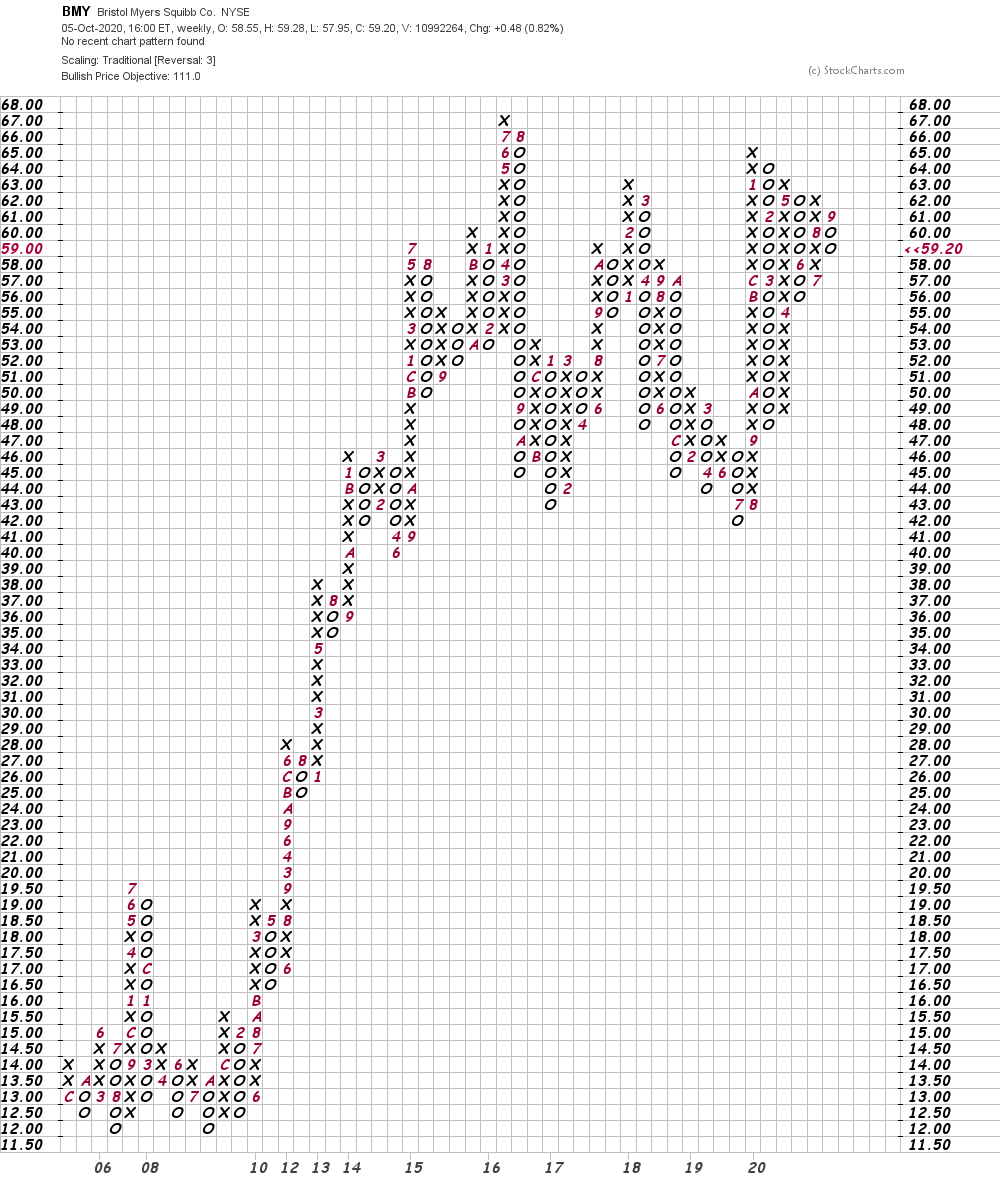 Bottom line strategy: like many people who live in New Jersey I have friends and neighbors who work for BMY. This does not influence my view of the charts. BMY looks poised for an upside breakout from a large triangle formation. Typically, breakouts happen about 2/3 to 3/4 through the pattern and become a little suspect when they extend to the apex. Typically, the breakout is in the direction of the previous trend which in this case is up. That being said, aggressive traders could go long BMY above $62 and again above $64 risking a close below $57 for now. $75 is our first price target.

(Bristol-Myers is a holding in Jim Cramer's Action Alerts PLUS member club. Want to be alerted before Jim Cramer buys or sells BMY? Learn more now.)

Get an email alert each time I write an article for Real Money. Click the "+Follow" next to my byline to this article.
TAGS: Mergers and Acquisitions | Investing | Stocks | Technical Analysis | Trading | Pharmaceuticals | Mad Money | Executive Interview