BP p.l.c.  (BP) is set to open higher Monday morning as oil prices are up sharply. Oil participants have bid up the price of crude in the wake of Canada's largest oil producing province ordering an unprecedented output cut. Facing a pipeline bottleneck and glut of oil in storage, Alberta will make producers slash output by 8.7%. This follows a renewed commitment over the weekend by Saudi Arabia and Russia to extend a deal to manage the oil market.

Keeping these positive developments in mind, let's take a look at the charts and technical indicators for BP.

In this daily bar chart of BP, below, we can see one pattern of trading for price and another pattern for the On-Balance-Volume (OBV) line.

Looking at price we can see a zenith or peak in May with a decline to an August low and rally into October. Weak oil prices and generally weak stock prices probably impacted BP's share price. BP broke the August low in October and November.

Prices are below the declining 50-day moving average line and the flat 200-day line. Last week the 50-day line moved below the 200-day line for a belated sell signal commonly called a death cross.

The movement of the OBV line is interesting in that it does not decline from May. There is a small and temporary dip in August before a move up to a new high in early October. This suggests some pretty aggressive buying in late August and September. As BP declined in October and November the OBV line showed less weakness.

In the lower panel is the Moving Average Convergence Divergence (MACD) oscillator which turned up for a cover shorts buy signal.

In this weekly bar chart of BP, below, we can see that prices are below the flat 40-week moving average line.

The weekly OBV line shows a slight decline from July and does not suggest much liquidation.

The weekly MACD oscillator crossed below the zero line for an outright sell signal.

In this long-term Point and Figure chart of BP, below, we can see a small distribution pattern with a downside price target of $34. A rally to $43 or $44 will make the chart more bullish. We could see that kind of rally today. The price at volume data does not show much overhead resistance. 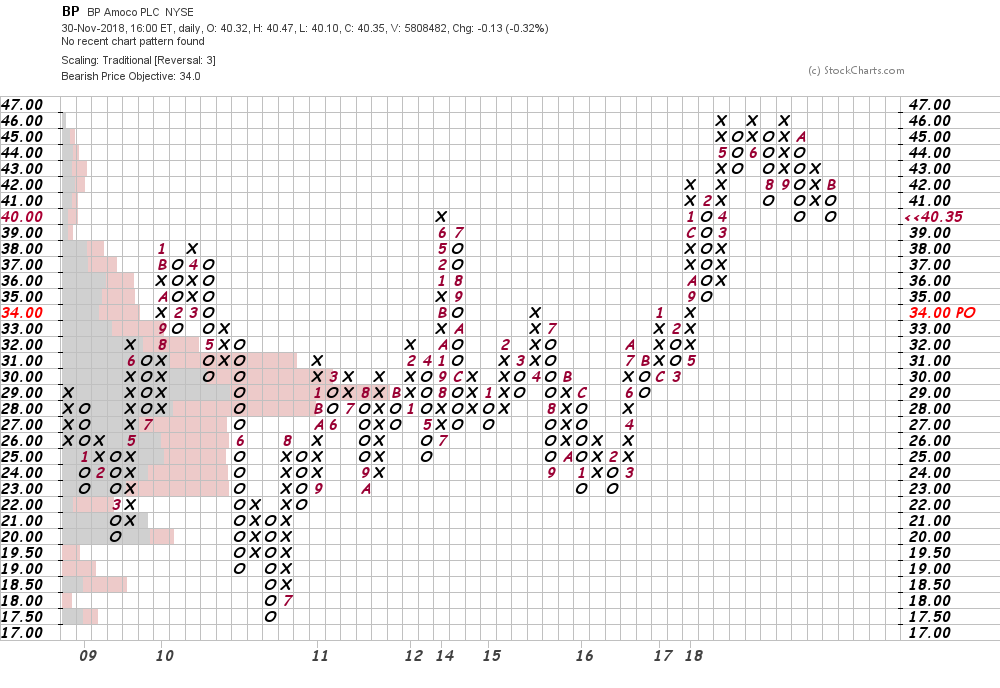 Bottom line strategy: BP looks like it will hold the $40 area and should try to work higher from here. Prices have been correcting for about half the year but the OBV pattern suggests that investors have largely stayed with their long positions.