BP PLC (BP) has been in a choppy sideways trading range the past two months but there are some signs that we could see the rally resume in the weeks ahead. Let's check out the latest charts and indicators.

In this daily bar chart of BP, below, we can see a rally from late December to April. The correction in May and June was relatively shallow. The lagging indicators - moving averages - are back in a bearish mode with the 50-day line about to cross below the 200-day line for what is commonly called a dead or death cross.

The On-Balance-Volume (OBV) line has outlined a low in May and a higher low in June which is stronger than the price picture which shows a low and a lower low.

The Moving Average Convergence Divergence (MACD) oscillator is working it way back to the zero line for a possible go long signal.

In this weekly bar chart of BP, below, we can see that prices have been trading around the declining 40-week moving average line.

The weekly OBV line shows a shallow decline from April telling us that aggressive selling did increase but that it also did not start a downtrend.

The MACD oscillator is narrowing around the zero line. The next move depends on the price action ahead.

In this Point and Figure chart of BP, below, we can see an upside price target of $46 being projected. A rally to $46 will mean a breakout over the April high. 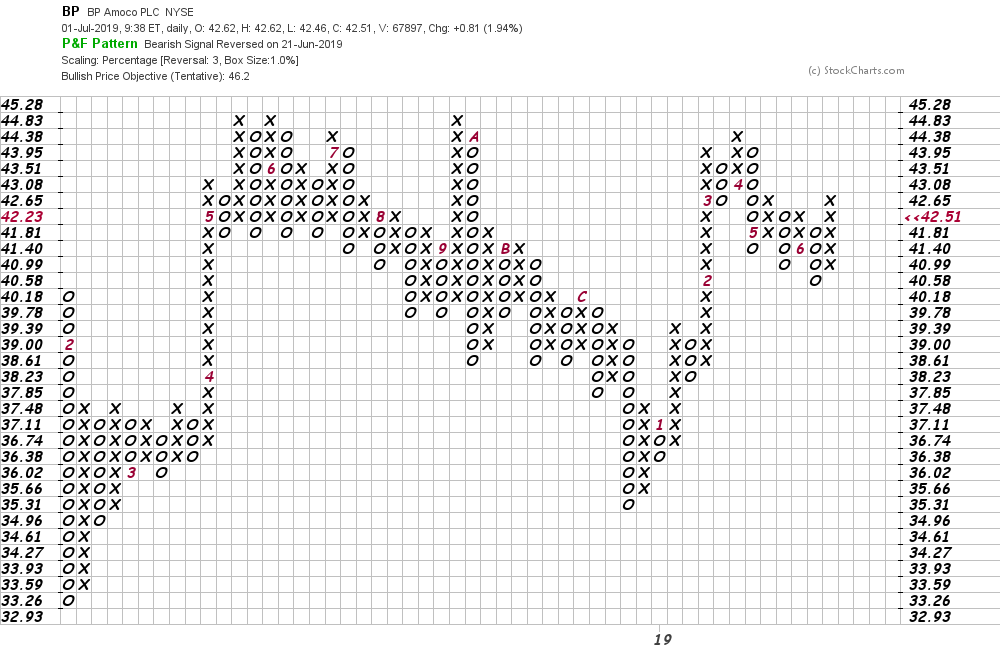 Bottom line strategy: I am not sure whether BP will need a weaker dollar or higher oil prices but the charts suggest that BP could rally to the $46 area and maybe $47-$48 after that.

Get an email alert each time I write an article for Real Money. Click the "+Follow" next to my byline to this article.
TAGS: Investing | Markets | Oil | Stocks | Technical Analysis | Trading | Energy

Here's how to play PSMT -- a spin-off of Price Club's operations outside of the U.S. from its 1993 merger with Costco.

Don't Ask Me Why, Ask Me What the Charts Say

I can't explain the market's moves, but I can tell you that for the last two days, breadth has stunk and Monday brought some statistics that require close monitoring.

As the NFT Marketplace Heats Up, Let's Focus on Gas Prices

I'm excited to see what a Coinbase offers, but there's a catch for investors looking to pocket some coin.