I keep wanting to say British Petroleum. The name of the firm is now BP PLC (BP) . Used to be BP Amoco PLC. Before that, it was British Petroleum. I'm also the guy that still thinks Chrysler when the letter C runs past on the ticker. I think we'll just call it BP from here on, but you know in interviews that I will relapse. Long has BP been one of my favorite oil stocks. Long has the firm paid an attractive dividend in order to keep investors interested, as first the Deepwater Horizon Oil Spill in 2010 created not just death but havoc, and finally as with the entire energy space, the volatility in pricing the key commodity finally became an issue. Finally this morning a reward, not just in the form of net basis erosion, through distribution, but through actual share price appreciation. For the firm's fourth quarter, results were truly impressive, EPS of $1.04.... a 20 cent beat, on revenue of $75.7 billion. The sales print beat expectations by more than a cool billion dollars while growing on a yearly basis by 11.6%. Rock on.

Liking What I See

Production was a strength here. For the full year production at BP increased to 3.7 million barrels of oil equivalents per day (BOE). This is growth of 8.2%. That kind of growth not only beats Chevron (CVX) for the year, but is the highest level of output at BP since that fateful year of 2010. The firm expects production to grow further from here too, especially with six major upstream projects brought on line just in 2018. Downstream business lines performed as profit drivers as well, similar to what we saw in Exxon Mobil's (XOM) release. In other words, the firm performed well across all business lines. The negative would be the lasting, ongoing drag put on cash flows by the provisions that must be made in response to settlements made with the federal government as well as the Gulf coast states. In the release, the firm admits that this liability can be expected to last still for a number of years. As of December 31st, the firm still made provision of $345 million for such litigation and claims.

Back to the good stuff. BP spent $16 million repurchasing two million ordinary shares throughout the quarter. Not a lot, right? That was tag's ends, that's why. The firm bought back 50 million shares in 2018 at a cost of $355 million. In the release the firm states the intention to maintain this repurchase program, as well as pay a $0.615 quarterly dividend (5.94% yield) to shareholders of record February 15th. The shares go ex-div on Feb. 14th. Happy Valentine's Day. 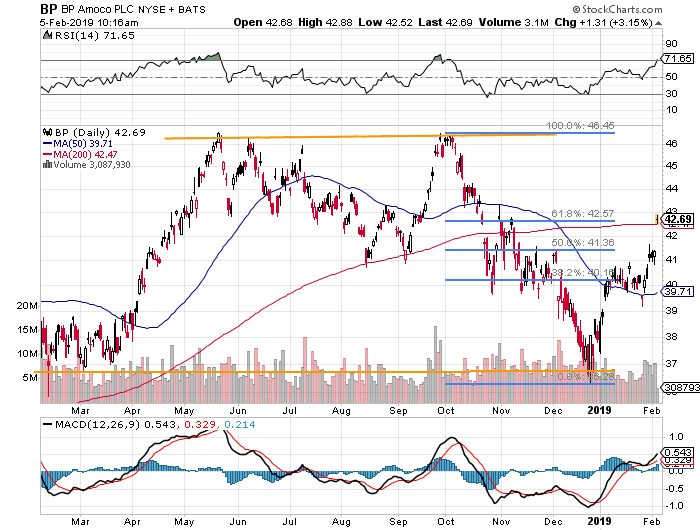 I have given you this name a couple of times now. This morning we see the shares struggling to take and hold the 61.8% retracement level of the late 2018 selloff. This spot served as support last spring and then as resistance over the summer. Those who write the algorithms see this as well, and this battle will likely be significant.

My thoughts? This stock returns eventually to the $46/$47 level where it has run into a brick wall four times over the past year. There's a trade there.

Notes: The sales of these options provide an aggregate credit of $1.17, reducing the net basis for the trader to $41.53. Best case... the shares are called away in July at a net profit of 10.8%. Worst case.... The trader ens up long 200 shares in July at a net basis of $39.27. The trader would at that point write, then two covered calls versus the equity long in order to further reduce net basis.

Get an email alert each time I write an article for Real Money. Click the "+Follow" next to my byline to this article.
TAGS: Earnings | Investing | Markets | Oil | Options | Stocks | Technical Analysis | Trading | Stock of the Day