For the "Executive Decision" segment of his Mad Money program Thursday evening, Jim Cramer spoke with Aaron Levie, co-founder and CEO of cloud-services provider Box Inc. (BOX) , which reported a strong quarter in February and has seen its shares rally 80% from their recent March lows.

Levie said Box started 15 years ago under the premise that everyone should be able to securely access and share their files from anywhere. Once the lockdown ends, Levie said he expects companies to move even faster to the cloud and many of these work-from-home trends will continue. Box continues to add new services, like malware detection.

Let's check out the charts of BOX to see what we can detect.

In this daily bar chart of BOX, below, we can see that prices have been in a downtrend for the past 12 months. The selloff did get more intense in March as the broad market sank sharply and quickly but the fact remains that BOX has been weak for some time now.

The daily On-Balance-Volume (OBV) line shows an "interesting pattern" in that the low on this chart was in August and then the line moved sideways as prices continued to decline. Since the middle of March the OBV line has risen and is now close to a new high for the move up.

The trend-following Moving Average Convergence Divergence (MACD) oscillator is crossing the zero line for an outright go long signal after spending much of the past year below the zero line in sell territory.

In this weekly bar chart of BOX, below, we can see that prices have been in a decline since the middle of 2018, telling us that whatever has been driving the stock price lower it is not a new story. Prices are testing the underside of the declining 40-week moving average line.

In this daily Point and Figure chart of BOX, below, we see some interesting clues. Prices met and exceeded a downside price target of $12. The software has not detected enough accumulation (buying) to suggest an upside price target. The volume by price data (bars from the left scale) shows a lot of possible overhead resistance from $16.50 on up. I suspect there could be many holders of BOX from higher levels that may use a rally to "get even". 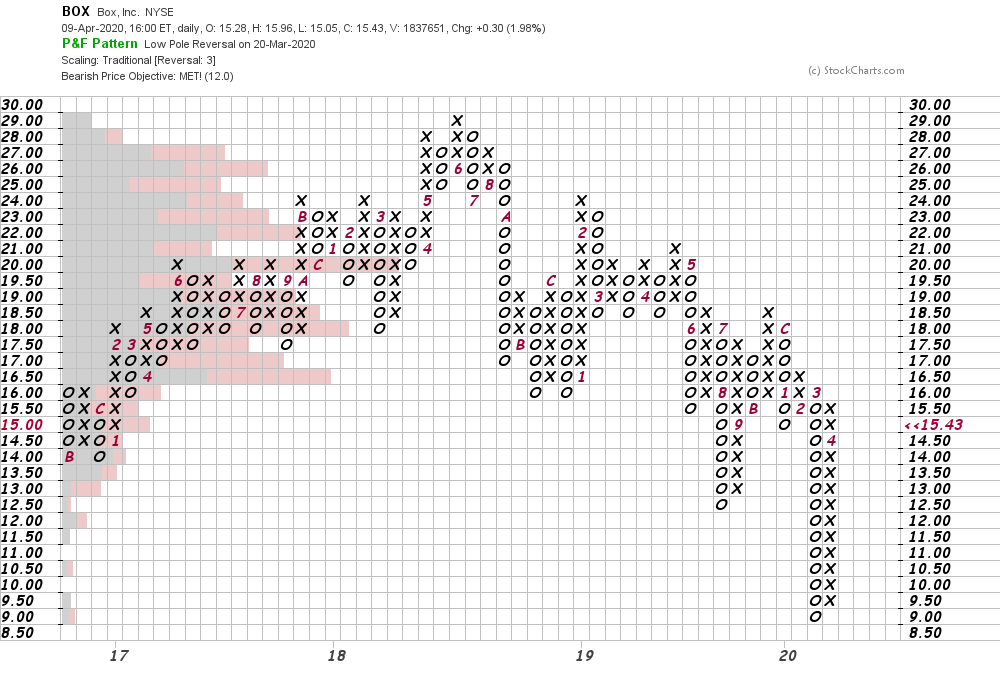 Bottom line strategy: The share price of BOX has rebounded quickly from the March nadir but the "bigger picture" suggests the stock has only made a strong bounce in a longer-term downtrend. I don't find this an attractive situation for new longs and anticipate that further gains will be met with increased selling from "under water" longs.

Get an email alert each time I write an article for Real Money. Click the "+Follow" next to my byline to this article.
TAGS: Investing | Stocks | Technical Analysis | Trading | Cybersecurity | Software & Services | Technology | Mad Money | Executive Interview