BA just announced a 20% dividend boost and a $20 billion stock buyback program. Smith said Boeing's confidence in its business stems from the 5,800 planes in its backlog. Over the next 20 years, Boeing expects the demand for new aircraft to exceed 43,000.

I guess that sounds bullish but the market is a discounting mechanism so let's turn to the charts for a bit.

The volume pattern is interesting in that volume was relatively light on the rally to a new high in early October. Chart watchers like to see volume increase on a rally and that was not the case.

The daily On-Balance-Volume (OBV) line shows a peak back in February followed by a downward sloping trend to late November. A declining OBV line tells me that sellers of BA have been more aggressive.

The Moving Average Convergence Divergence (MACD) oscillator moved below the zero line in late October for an outright sell signal.

In this weekly bar chart of BA, below, we can see the huge rally of the past three years followed by the sideways or topping pattern the past year. Prices are trading below the declining 40-week moving average line.

The weekly OBV line was strong until this September and has since inched lower.

The weekly MACD oscillator said to take profits back in February and just moved below the zero line for an outright sell signal.

In this Point and Figure chart of BA, below, we can see a downside price target of $296.81. Not all that bearish. On the upside if we get a trade up at $337.91 the chart will look better in the short-run. 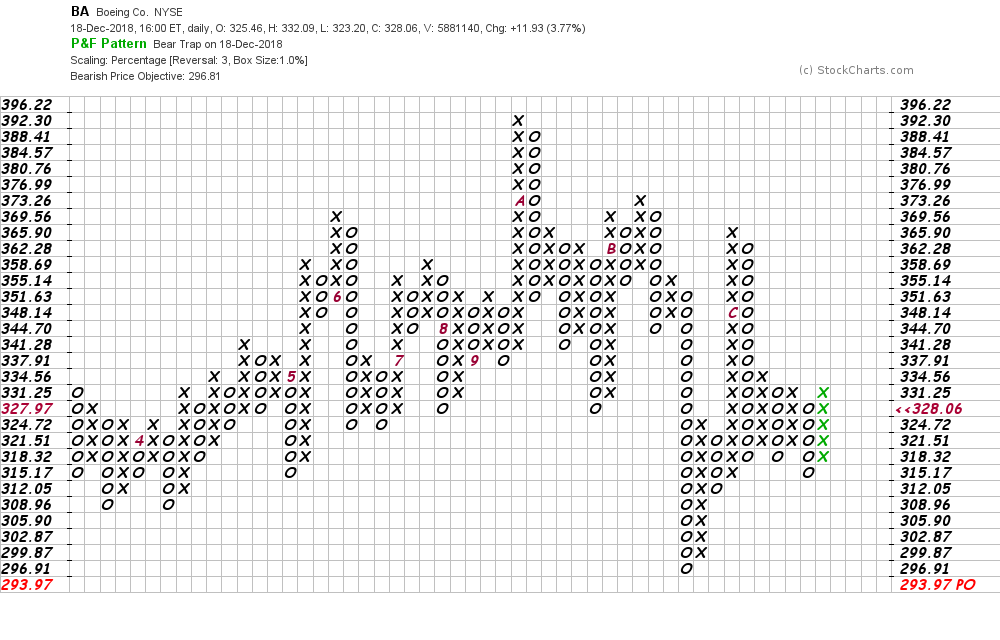 Bottom line strategy: The fundamental story on BA sounds great but BA has already made a big rally in the past three years. The news seems to be discounted pretty well. I do not see a trade from the long side of BA here. I would wait for the technical position to improve.

Get an email alert each time I write an article for Real Money. Click the "+Follow" next to my byline to this article.
TAGS: Economy | Investing | Markets | Stocks | Technical Analysis | Trading | Aerospace | Airlines