In late July, Boeing (BA) reported the firm's second quarter performance. Things were looking up. The firm showed a surprise profit, adjusted or not. The firm beat revenue projections on year over year growth of 43.9%, the company's first positive annual revenue growth for any single quarter since the cows came home (Q4 2018). Since then there have been some deals. The firm has sold some aircraft. There have been ups and downs, mostly downs since mid-August.

It appears that Boeing has booked gross aircraft orders for 630 aircraft for 2021 through the end of July. This includes one order for 200 craft from United Airlines Holdings (UAL) that itself included an order for 150 737-MAX 10's. Airbus (EADSY) supposedly has only booked orders for 167 aircraft year to date, but is said to be ahead (certainly of where it was) in the battle for market share between Boeing's line of 737-MAX aircraft and the Airbus A320neo.

Labor Day Weekend. We all looked forward to a weekend of rest and relaxation. Markets have been moving the right way, sort of testing our patience while doing so. Despite, or in spite of a virus that just won't quit. That's when it got tougher for Boeing. One of America's greatest industrials, tremendous exporters and large employers ran into one tough weekend.

Back in July, Boeing informed us that the firm would likely deliver fewer 787 Dreamliners than planned this year as it worked through a new production-related structural defect in the program. At that time, the firm felt that it would deliver less than half of the 100 such aircraft already held in inventory. Boeing had expected to move close to a "vast majority" of those 100 aircraft. Now, deliveries are reportedly out until at least October, as the Wall Street Journal reports that Boeing has been unable to get the FAA (Federal Aviation Administration) to inspect the 787's.

Ryanair (RYAAY) announces that that firm is walking away from talks with Boeing for a potentially large follow up order to last year's purchase of 75 737-MAX aircraft. Ryanair is Boeing's largest customer outside the U.S. Boeing and Ryanair were supposedly 10 months into these talks. The lack of a deal came down to price. Ryanair is a notorious discount shopper when it comes to adding to their fleet. Ryanair CEO Michael O'Leary said, "Boeing have (has) a more optimistic outlook on aircraft pricing than we do, and we have a disciplined track record of not paying high prices for aircraft." Ryanair still plans to take delivery of more than 200 737-MAX aircraft already ordered through 2025. They are just not adding a large order for MAX 10's at this time.

In late August, Airbus picked up an order from British luxury carrier Jet2 (DRTGF) for 36 single aisle aircraft, with the potential for the deal to rise to 60 planes. Jet2 is historically a Boeing customer. Delta Air Lines (DAL) has retired over 100  aircraft this year and plans to retire another 250 by 2025. Delta recently placed an order with Airbus for A321neos for a second time this year. These orders more likely than not would have been for Boeing 737's in years past. Ryanair's CEO even suggested that Boeing's pricing could be a reason for traditional Boring clients going over to Airbus to add to or replace craft already in their fleets.

Add this to the fact that thanks to the Delta variant of the SARS-CoV-2 virus that air travel for both business and recreational purposes have taken a major step backwards in August after appearing to be headed for a robust recovery as recently as July.

... I need a discount to be interested in Boeing. BA reports in late October. Right now the consensus of 14 sell-side analysts covering the stock is for EPS of $0.11 on revenue of $19.2 billion. These numbers would be comparable to a loss of $1.39 per share on $14.1 billion for Q3 2020. What do these analysts know though? The range of expectations for EPS runs from a loss of $0.44 per shared to $0.73. The range for revenue generations runs from $16.5 billion to $23.2 billion. In other words, they guys who supposedly know... don't know.

Two five stare (at TipRanks) analysts who are considered Boeing bulls opined this morning. Myles Walton of UBS kept his "Buy" rating on BA, but reduced his price target from $310 to $290 based on the 787 Dreamliner delays. Peter Arment at Robert W. Baird maintained his "Outperform" rating and $306 price target, but mentions concern over the Dreamliner delays, but sees Chinese approval for the 737-MAX finally acting as an upside catalyst. 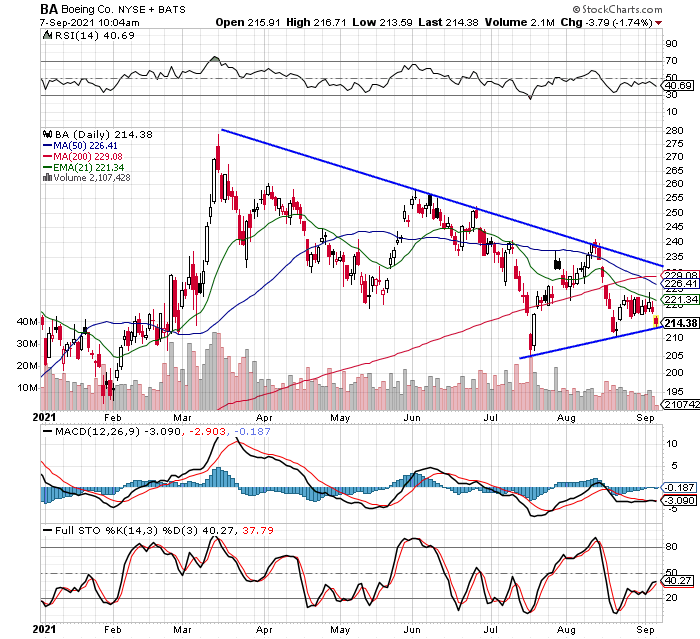 The chart does not represent a "descending triangle", which is a bearish pattern, but it is razor close. The down trend of highs is obvious, from $278 all the way down to early August's $241 and beyond. There is a very mild up trend of lows that I almost called a flat-line, but it really isn't so I can't make the call, but this is very close to a classic bearish chart.

The Full Stochastics Oscillator, RSI and daily MACD all present as below average technically. The stock did suffer a "death cross" in late August. My instinct tells me that that $204 July low is headed for a retest. I don't even think about initiating a Boeing long until I see the shares on that doorstep... and even then only if it seems that COVID is finally on the run, allowing for a second attempt at a full reopening of the economy.

Get an email alert each time I write an article for Real Money. Click the "+Follow" next to my byline to this article.
TAGS: Investing | Stocks | Technical Analysis | Trading | Aerospace | Airlines