One of the events that Jim Cramer said concerned him most on Wednesday was a weak outlook from Boeing Co. (BA) . This was expressed during his Mad Money program last evening.

That sounds like a good reason to pay a visit to the charts and indicators of BA.

In this daily bar chart of BA, below, we can see that prices have trended lower from its early March zenith. Prices held in the $340-$330 area in May and early June, and managed a rebound to the $380 area.

The On-Balance-Volume (OBV) line is pointed lower and peaked in early March. A declining OBV line signals that sellers of a stock have been more aggressive.

In the lower panel is the 12-day price momentum study which has yet to show a bullish divergence or a pattern of higher lows.

In this weekly bar chart of BA, below, we can see the large top formation going back to late 2017. A weekly close below $300-$288 should complete the pattern and open the way to much lower prices.

BA is below the declining 40-week moving average and the weekly OBV line just made a new low for the move down. The Moving Average Convergence Divergence (MACD) oscillator is below the zero line in a sell mode.

In this Point and Figure chart of BA, below, a potential downside price target in the $289 area is being projected. There is not much support in that area so prices could well decline further. 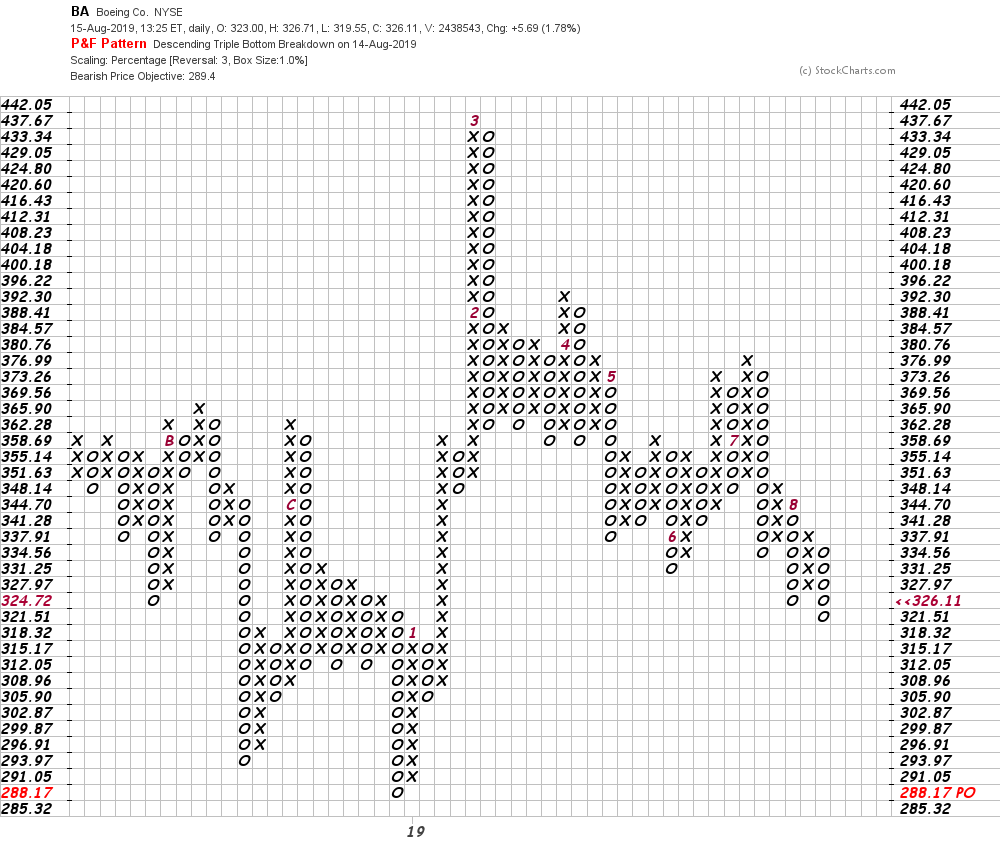 Bottom line strategy: It looks like BA is headed lower and there is not much in the way of support below the market. A break of the December low could precipitate further deep losses.

Get an email alert each time I write an article for Real Money. Click the "+Follow" next to my byline to this article.
TAGS: Investing | Stocks | Technical Analysis | Trading | Aerospace | Mad Money