Fritz said they're starting to see a few signs of optimism in the economy, with housing, auto and grain volumes increasing slightly. He said their parcel business, which supports e-commerce operations, has also been strong.

When asked about energy, Fritz explained that while coal remains in secular decline, shipments of natural gas and wind turbines, as well as refined petroleum products, have helped to cover those declines.

Fritz was bullish on the new U.S. trade deals to replace NAFTA. He said the U.S., Canada and Mexico trade alliance is stronger than ever, which makes the block of countries more competitive globally. Let's check and see if the charts look stronger than ever.

In this daily bar chart of UNP, below, we can see that prices have retraced their entire decline from February to the middle of March. There were corrections along the way higher but that looks like it allowed new buyers to enter. Prices are back above the rising 50-day moving average line and the bottoming 200-day moving average line.

The On-Balance-Volume (OBV) line has traded sideways since March but shows a number of "upswings" where buyers of UNP have been more aggressive.

In this weekly bar chart of UNP, below, we see a bullish set up. Prices are above the rising 40-week moving average line.

The weekly OBV line shows a smooth rise the past three months unlike the up and down sideways movement of the daily OBV line. We can also see that the OBV line only made a slight dip in February/March suggesting little in the way of distribution (selling).

The MACD oscillator crossed to the upside last month for a cover shorts buy signal and now this indicator is close to crossing the zero line.

In this Point and Figure chart of UNP, below, we can see the uptrend with higher lows and higher highs. A $197 price target is being projected by the software. 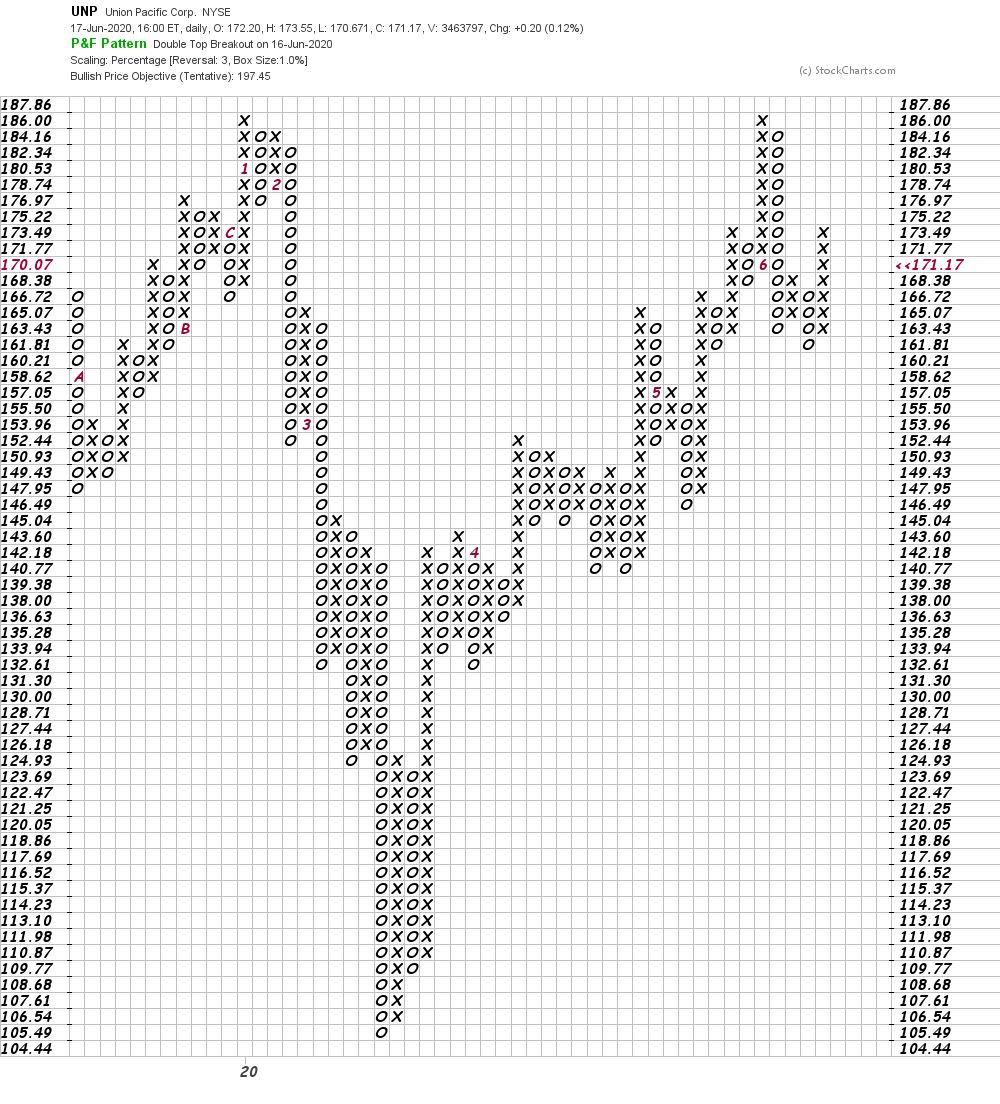 Bottom line strategy: The rally in the shares of UNP does not look over. Traders could go long here risking a close below $160. $197 or rounding it up to $200 is our first price target.

Get an email alert each time I write an article for Real Money. Click the "+Follow" next to my byline to this article.
TAGS: Economic Data | Investing | Markets | Stocks | Technical Analysis | Trading | Transportation | Mad Money | Executive Interview