By TIMOTHY COLLINS Nov 20, 2018 | 01:50 PM EST
Stocks quotes in this article: BB
BlackBerry ( BB) has turned in the year I expected. The strong start to the year didn't last more than a few weeks. Instead, the stock is now down over 23% year-to-date. Maybe 2019 is the year?
Maybe. Maybe not. I do think it will be a better year. Some of the initiatives of the past few years failed to take hold as management initially predicted. The biggest whiff appears to be in the connected truck/inventory market. While QNX systems continue to trend well in automobiles, we're not seeing the inventory systems in the trucking sector ramp. BlackBerry holds a No. 1 position in infotainment and telematics in the auto sector, but it's the cybersecurity portion of the business that demands attention.
Although the BlackBerry handsets of the past have been put to rest, the operating systems continue to thrive. Users are drawn to the strong cybersecurity associated with BlackBerry's systems. This has been the growth portion of the business as Blackberry gains in the Internet of Things (IoT), a market seeing over 300 million connected instruments each year.
A major bullish thesis for owning Blackberry has been its huge pile of cash which represented nearly half the company's market cap.
And with one deal, that argument has been tossed into the breeze. Over the weekend, BlackBerry announced it was purchasing Cylance for $1.4 billion in cash. Now the company's cash position is about equal to its debt position. The initial reaction ranged from stupid to BlackBerry went all-in on one deal to this buy is too big.
I disagree. BlackBerry's growth still exists, but low double-digits is about the best the bulls can hope for over the next several years. Cylance may change that. Scratch that. Cylance will change that.
Cylance is a leader in end-point cybersecurity serving phones, PCs, automobiles, and IoT devices. Basically, a perfect fit for BlackBerry. Furthermore, it is projected to generate over $200 million in revenue this year with a growth rate of 90%. BlackBerry sales are only pacing for growth of 8-10% for 2019 which leaves total revenue around $1 billion. It's quite possible Cylance will double Blackberry's revenue growth rate.
The company has been operating with profitability around the flatline. I expect we'll see that dip negative initially, but I anticipate cash flow from this deal with be positive and with Cylance on board, Blackberry could very well double its current revenue within the next three to four years with strong profitability coming by the end of year two.
I see the recent dip in the stock price as a reason to buy shares under $9 with a holding timeframe of two to three years. 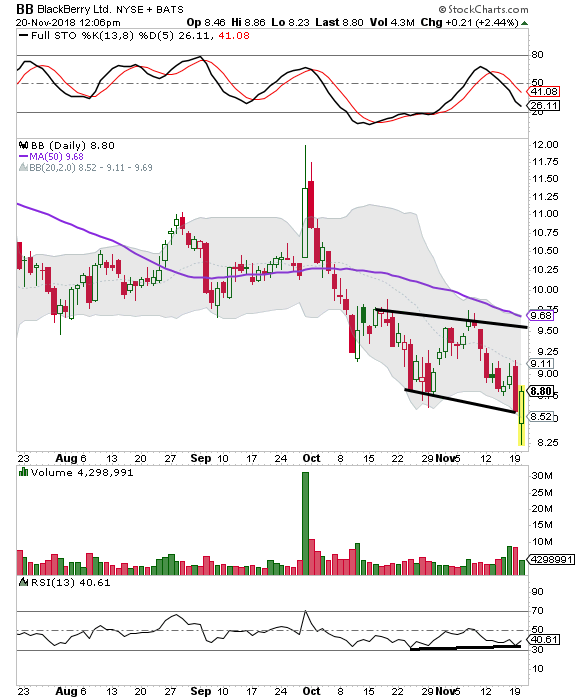