One of the most interesting debates in the financial industry is over cryptocurrencies and bitcoin in particular.

One group of investors dismisses bitcoin as devoid of both utility and intrinsic value. However, there is growing acceptance of bitcoin with some institutional investors, which has helped to trigger a frenzy of buying in recent weeks, resulting in bitcoin more than doubling.

Investors can own bitcoin indirectly through the Grayscale Bitcoin Trust (GBTC) , which is a closed-end fund that passively invests in bitcoin. GBTC trades with a premium and can't be traded 24 hours a day like the actual cryptocurrency, however, it allows exposure that is well correlated with the movement of bitcoin.

Bitcoin is a very high-risk investment, but many elements are coming into play that may drive it to crazy levels. While some folks believe that there are many fundamental merits to bitcoin, I view the situation as pure supply and demand. Traders are convinced that there is a supply of buyers that will continue to drive it higher, and that can create an almost "mania" dynamic. But, to me, it doesn't matter that there may not be any intrinsic value as long as there is a never-ending supply of buyers willing to pay a higher price.

Bitcoin is likely to be tremendously volatile -- the success that traders have now means that a huge supply of support will build. Those that don't want to chase the strength will look to buy dips.

What needs to be recognized at this point is that there is growing institutional support for bitcoin. This is adding a veneer of respectability that was missing in the past. Recently, John W. Henry, a well-known investment manager, Scott Minerd of Guggenheim Partners, and J.P. Morgan have all been bullish on bitcoin and mentioned extreme price targets.

The bull case is based in part on bitcoin as an alternative to gold, which has always been seen as an appropriate hedge against various economic disasters.

According to J.P. Morgan, bitcoin's market capitalization of around $575 billion would have to rise by 4.6 times to match the total private sector investment in physical gold and ETFs. At that price, bitcoin would be valued around $146,000. This only happens if bitcoin starts to trade more closely in tandem with gold, which attracts more institutional investment.

In an interview on Bloomberg TV, Guggenheim Partners Chief Investment Officer Scott Minerd said his firm's fundamental analysis shows bitcoin should be worth $400,000. That price target is based on two things: the asset's scarcity and its relative value to gold as a percentage of gross domestic product.

These valuation arguments are highly speculative but what is clear is that the price action of GBTC suggests that this could be the start of a parabolic move that will not end quickly or easily. Anyone looking to play this trend needs to be extremely mindful of the high risk and the great volatility, but it is a very interesting speculation for the aggressive trader. 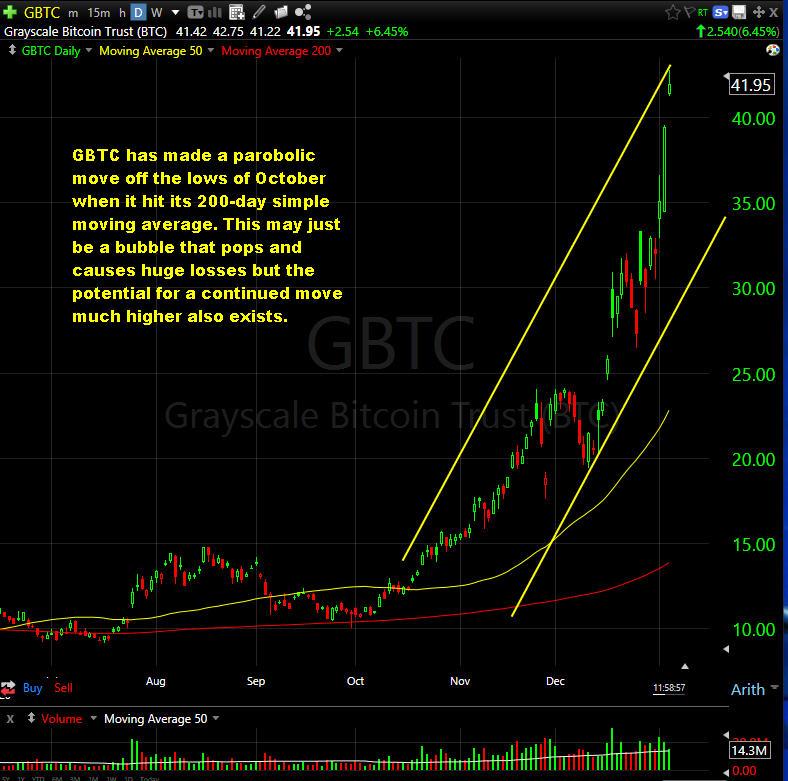 Get an email alert each time I write an article for Real Money. Click the "+Follow" next to my byline to this article.
TAGS: Bitcoin | Investing | Markets | Trading | U.S. Equity | Cryptocurrency

Invest in Block? It's Definitely Tradable

Everyone watches the Cash App segment which is super reliant on Bitcoin for performance. When that's good, it's great. When Bitcoin is not so hot?

Buffett and Munger on Bitcoin: Just Say No

Here's what you should be prepared for.