According to the beyond reproach source of the world's free encyclopedia, Wikipedia, bitcoin was invented in 2008 by an unknown person or group of people using the name Satoshi Nakamoto. So, it seems fitting to look at bitcoin using Japanese candlesticks and the techniques from the 1740s. Japanese traders also look at all the western techniques that have only been around the past 70 years or so.

In our last review of bitcoin on March 5, I wrote that, "For me, the risks of being long bitcoin and probably all cryptocurrencies are too high right now. Avoid them." The nearby CME bitcoin future has moved higher in the past week but that doesn't mean the charts are bullish.

Time for "mining" some charts.

In the daily Japanese candlestick chart of the nearby CME bitcoin future, below, we can see some interesting clues. Prices are up more than five-fold in the past six months. Prices are more than twice the level of the rising 200-day moving average line which intersects around $20,000. Typically, when a stock or other instrument is trading at twice the 200-day average it is considered extended or overbought. Prices can always get more overbought and extended but this guideline is pretty good.

The pattern of Friday's candle could be a bearish hanging-man pattern. However, we would want to see confirmation with a bearish candle this coming Monday.

Trading volume has been diminishing since early January and that is not a good sign. Volume should increase in the direction of the trend. Even since Feb. 8 when Tesla (TSLA) revealed they had purchased bitcoin the trading volume has declined. Has Elon Musk lost some of his magic? The On-Balance-Volume (OBV) line has been pretty much stalled since early January and thus is a bearish divergence when compared to the price action.

The trend-following Moving Average Convergence Divergence (MACD) oscillator has crossed to the upside for a buy signal but it could easily turn lower again.

In this monthly -- yes monthly -- Japanese candlestick chart of the nearby bitcoin future, below, we want to show a rare pattern. We have pointed out a Japanese candlestick technique to Real Money readers called "eight to ten record highs." We have shown this on weekly and sometimes daily charts. A monthly chart should add to the gravity of the pattern. The technique says that you need to look for a reversal after a market has risen for eight or nine or ten record highs (record lows also works).
In this monthly chart I am assuming the pattern starts with the white real body for July 2020. March would now be the eighth record high. Notice how volume has fallen off from January's pace? How the slow stochastic indicator peaked in December?
Interesting!

In the weekly Japanese candlestick chart of the Grayscale Bitcoin Trust ( GBTC) , below, we can see that prices did not make a new record high this week when futures did. This divergence could become important. We'll need some hindsight to find out.
When the 3X leveraged ETFs were introduced I used to out for divergences between the underlying asset and the ETF. The "tell" was when the S&P 500 made a new high but the leveraged ETF did not.
Prices are extended/overbought when compared to the 40-week moving average line. The slow stochastic indicator peaked in November and has made a lower high when prices made a higher high. The weekly OBV line is still positive.

In this daily Point and Figure chart of GBTC, below, we see a mixed picture. Prices are pointed up and the software shows a possible $108 price target. The volume by price bars on the left scale show activity in the $45-$43 area. Weakness below $44 (the halfway point) could precipitate further declines. 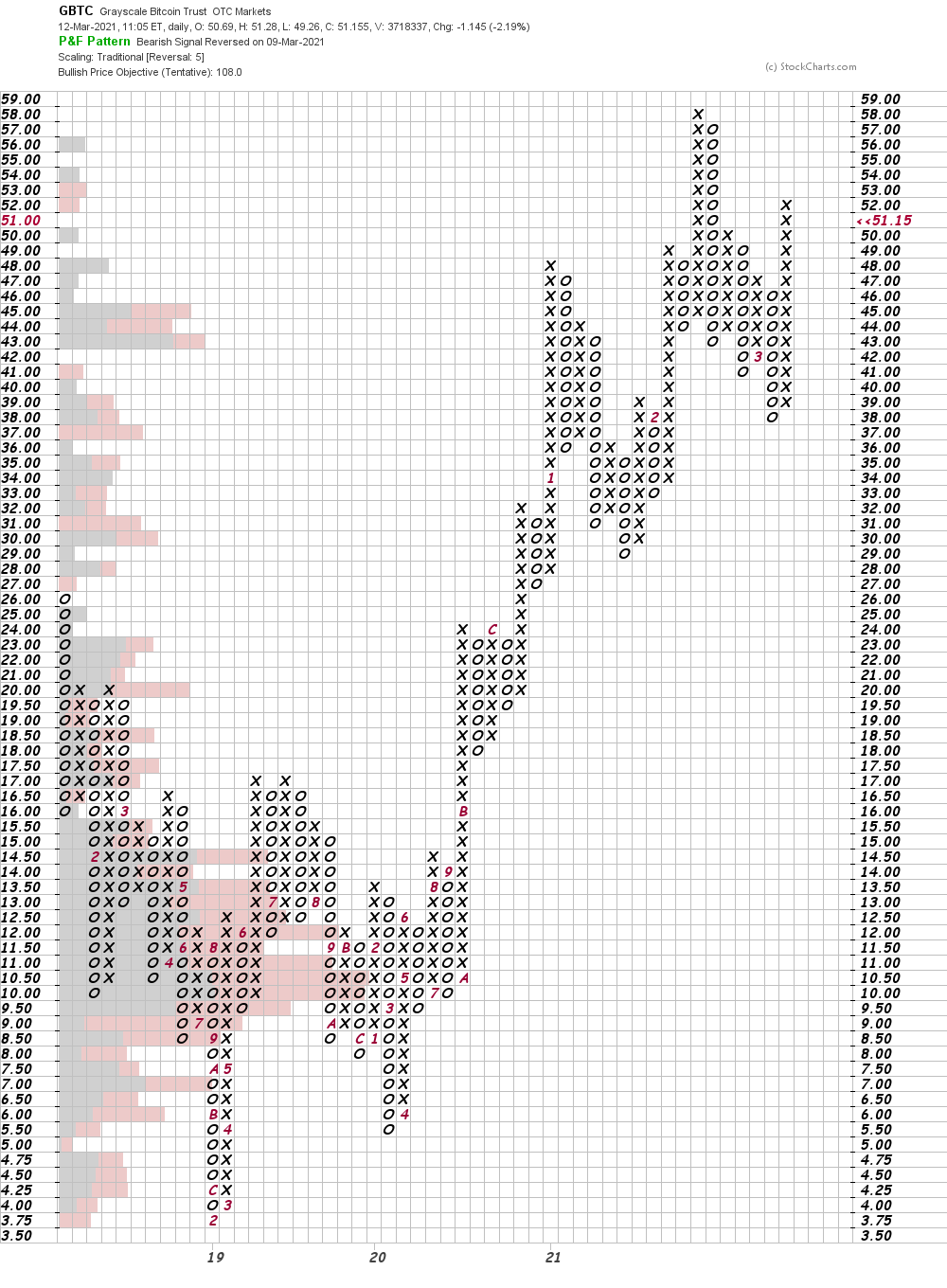 In this weekly Point and Figure chart of GBTC, below, we can see that prices have reached a price target in the $52 area. Prices could go higher but technically oriented traders may be taking profits. 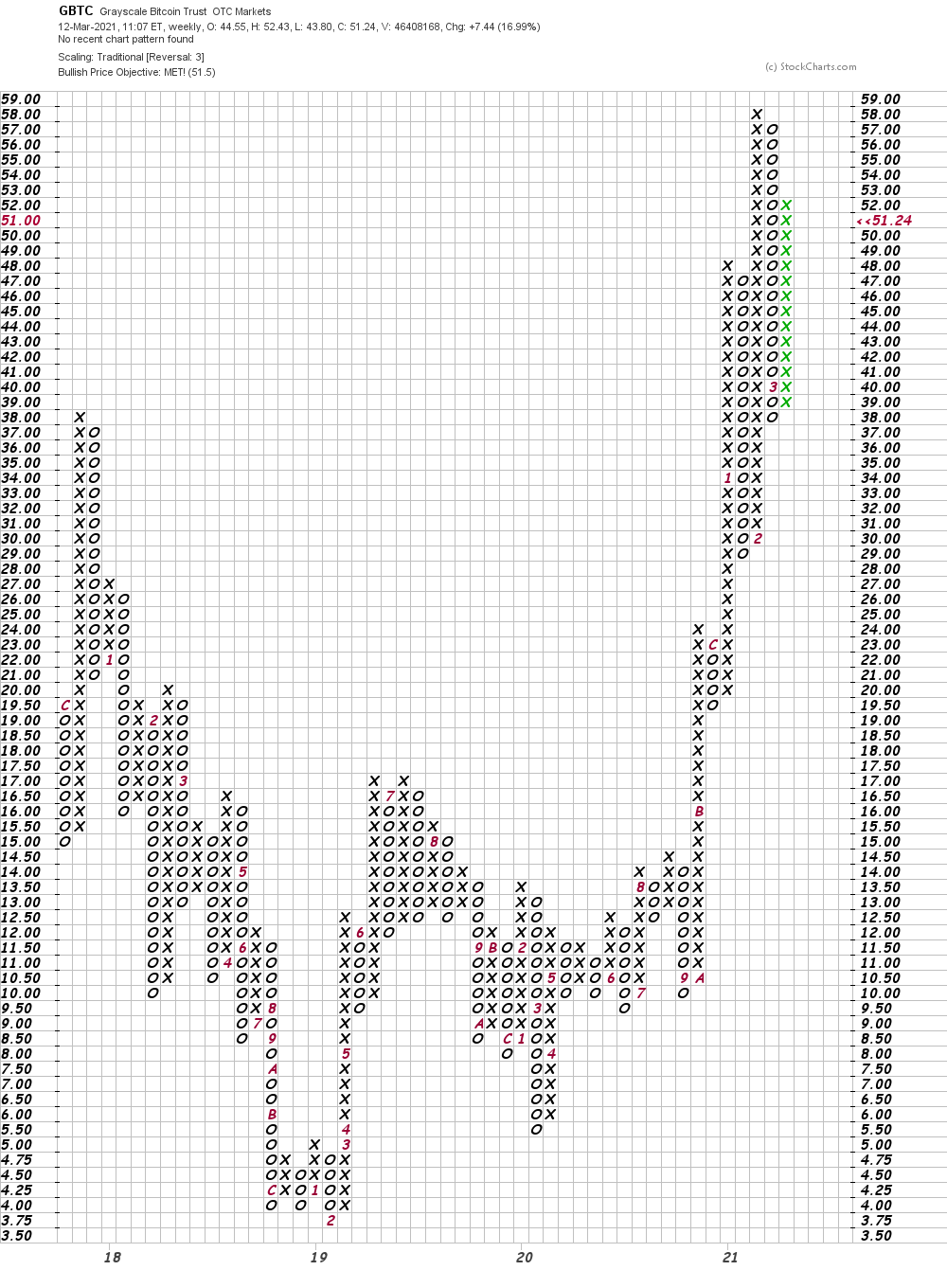 Bottom-line strategy: As you sit in the comfort of your family room or den going over your weekend reads  -- maybe this article on bitcoin will give you pause.
Read Bruce Kamich's analysis of MicroStrategy stock here.)
Get an email alert each time I write an article for Real Money. Click the "+Follow" next to my byline to this article.
TAGS: Bitcoin | Investing | Technical Analysis | Fintech | Technology | Cryptocurrency

Pockets of momentum are narrow Tuesday as rotation continues.

Growth Stocks led the market on Monday, but breadth was negative as small-caps lagged.