Is Bitcoin cheap here? That's hard to say. Are there legitimate uses for Bitcoin? The world's best known cryptocurrency can be exchanged for cash just like any asset.

While that's legitimate, it does lead one back down the path of potential, but not necessarily, illegitimacy when asked why one would. Sure, if one's home currency is under pressure and one needs to move wealth across borders, it makes sense. Sooner or later, once most of the economy is digitized, the central banks will more forcefully "regulate" this industry should the industry at that time, be large enough to offer what would be "fiat" cryptocurrencies significant competition.

The Fed, the ECB, the BOE, the BOC, the BOJ, the RBA, and most certainly the PBOC will certainly have no problem moving to preserve their own power and such competition would weaken the source of such power.

Many disagree, and that's fine. I do not see a rosy long-term future for Bitcoin or really for any independent cryptocurrency, for that reason. Others might see a public shift away from fiat currencies controlled by central banks, and they might be right. The fact is that I will not be investing in Bitcoin in a "set it and forget it" kind of way unless the asset or asset class at some point takes on more of the characteristics of money.

Money must be seen as a unit of account. Bitcoin can do that. Money must be divisible. Bitcoin can do that. Money must sustain the ability of being used as a store of value. So far, hard assets, precious metals serve this purpose better than Bitcoin. Some might say, depending on the timeline used, that fiat even makes a better store of value than Bitcoin. I am unconvinced there, as I am no long-term fan of fiat either.

Money must also be useful as a medium of exchange. Bitcoin, and all cryptocurrencies really strike out here. So do precious metals and other hard assets. This is where fiat really shines. Central bank issued currency is used in trade for goods and services or to extend and repay credit around the world in nearly every circumstance.

So, enough there. Really the point I am trying to make is that Bitcoin and its kin are better suited to traders than to investors. 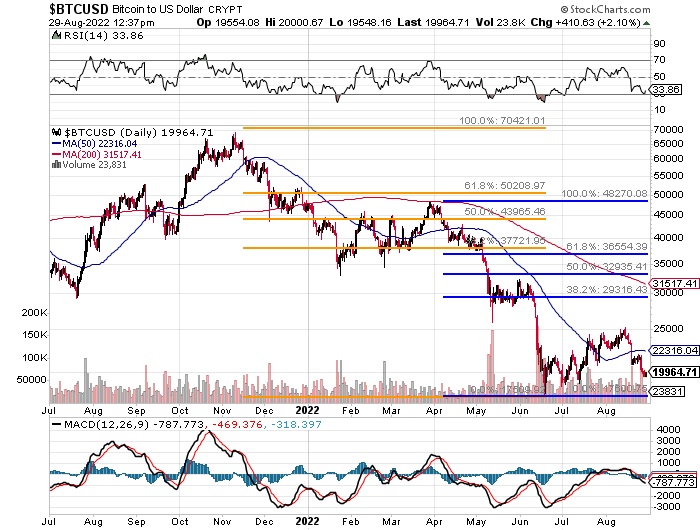 Readers will see that Bitcoin is weak, but according to its reading for Relative Strength, not quite technically oversold. Bitcoin's daily MACD is still rather bearish, with all three components still below zero. A 38.2% Fibonacci retracement of the November through June selloff would require a rally of 89% from here. It would also require that Bitcoin retake its 50 and 200 day SMAs. One would be tough. Both? That's asking a lot.

A 38.2% Fibonacci retracement of the late March through June selloff would not require any retaking of the 200 day line, and "just" a rally of 46.8%. That's a lot for a stock, but certainly something that Bitcoin can do. That line, at around $29,316 is a better target for the long and committed crowd than the other Fib choice up around $37,721. 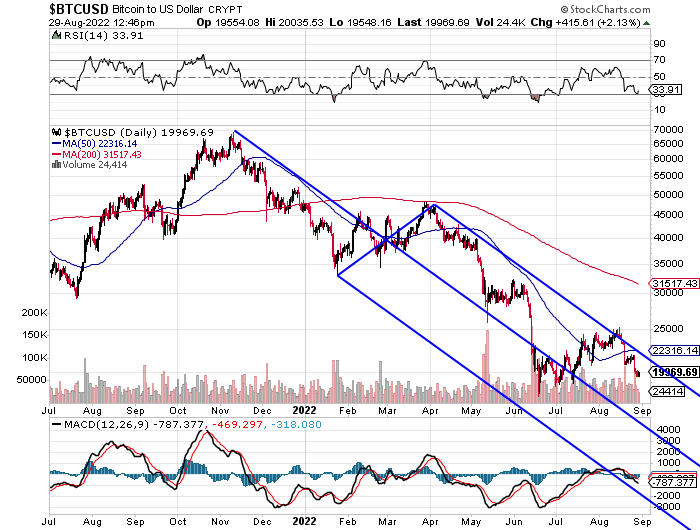 Application of an Andrews' Pitchfork model to the same chart illustrates just how close Bitcoin was to breaking out in mid-August. That failure was key, as sellers stepped in, and Bitcoin remained mired in a downtrend, which is where it still is now. Not that a test of Pitchfork's central trendline would place the last sale for the asset down around $15K.

One could go out and grab some Bitcoin for their account, pay a commission and then watch the asset trade up and down. It would be either the very brave or very foolish trader/investor that would place an allocation on any crypto-asset in size that would be competitive with either debt to equity securities or other hard assets such as real estate that might make up an overall investment portfolio. Something non-productive that is completely reliant upon the faith of a few and nothing quantifiable to determine value, must be considered highly speculative.

Traders might consider one of the few Bitcoin futures related ETFs as amenas of organizing one's indirect exposure to the space without allowing too much attention (or allocation) to be placed in one space. One such ETF is the ProShares Bitcoin Strategy ETF (BITO) , which runs with an expense ratio of 0.95%, and at least a few days ago, had $815M assets under management. The fund, which focuses on Bitcoin futures contracts is domiciled at NYSE ARCA. 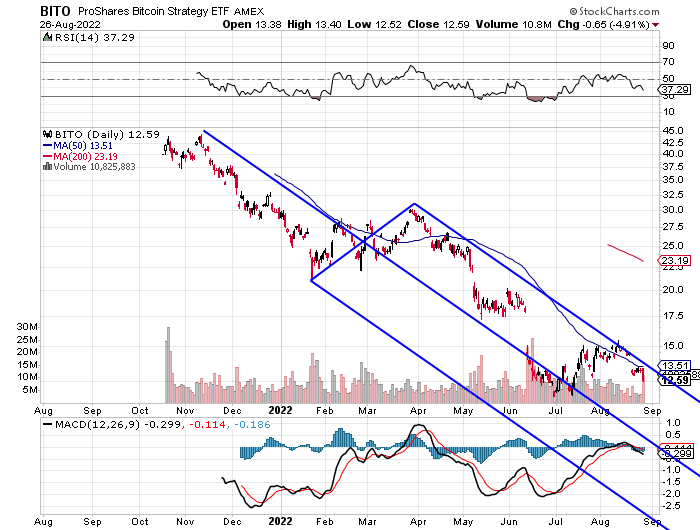 Readers will see that the chart of this fund, since creation last autumn... has tracked very neatly the performance of actual Bitcoin, though a lot less US dollars are actually involved to play ball. They are both down a rough 70% since the fund's inception.

Now, what the Fed is doing is obviously going to hurt all asset classes. Quantitative tightening will surely damage assets with prices that appear inflated more than value assets. Where would you place Bitcoin? Probably not in the value or defensive camp. That means to me that if you are bullish, or even bearish and willing to get long, but at a discount, that it makes more sense in terms of self protection to gain that kind of exposure through options related to the ETF mentioned.

I would rather sell Bitcoin than buy it here, but I am certainly not sure of myself. That for me means that getting long something like BITO October 21 $10 put for less than $0.50 makes more sense than trading actual Bitcoin. Even if your inclination is to go the other way in Bitcoin, this allows one to trade that way in a less expensive way.

Get an email alert each time I write an article for Real Money. Click the "+Follow" next to my byline to this article.
TAGS: Bitcoin | ETFs | Federal Reserve | Investing | Markets | Technical Analysis | Trading | Cryptocurrency

Crypto, Election, Inflation and the Fed: There's a Lot for Investors to Decipher

Here's how I'd be playing things right now.

The likelihood that big-name celebrities and investment firms will suffer significant losses due to FTX's troubles illustrates why it's always best to do your own due diligence before investing.

There was a cornucopia of reasons why investors fled risk assets on Wednesday for the perceived safety of cash.

The market has been distracted by the election and crypto woes, but today's Consumer Price Index data will have a big impact on the size of the next rate hike.

Hungover Market Loses Its Risk-On Appetite Due to Crypto Indigestion

In the midst of small-cap earnings season, there are brutal selloffs occurring in some of these stocks.