Reversal. Monday. Strange day. A day that saw the drumbeat of war turn into a little ditty. Whistling past the graveyard? Oh, the back and forth between Washington and Tehran is still headline news in the mainstream. Just not on Wall Street, apparently. The broader domestic equity indices all opened deep in the hole, and for the most part, that was as low as they would go for the day. The reversal to the upside was led by internet type names, pushing the Communications sector to the top of our daily standings board, not the Information Technology sector. I know that still confuses some. Either way, it still means that the gains made for the day were more central to the Nasdaq Composite and the Nasdaq 100. Though the S&P 500 did manage to place a plus tick on the board for Monday, that broadest of large cap averages did have to carry a level of weighting in both Transports and Materials type stocks just not present up at Times Square.

I do get the weakness in these spots. Higher fuel input costs would be a clear negative for the airlines. The rails however, did sell off with the airlines on Monday. Over the early days of January, yes, we have seen lower prices across several commodities to include wheat, corn, copper, and natural gas. Even crude prices, especially the sweet stuff which is what counts for the rails, sold off hard throughout the regular session on Monday after peaking overnight. Success for this group going forward is as much about potential economic growth as it is about weaker dollar valuations, and the dollar has found some support in early 2020.

What has quickly become apparent is that Wall Street has brushed aside the potential for further military action on either side. That in no way means that the threat has abated. My somewhat amateurish opinion is that the marketplace has determined that the U.S. would prefer to cool tensions for now, and that Iran might not be quite ready to take any overt action, that whatever they might be doing through cyber-space, has already been in place. This may not be correct, but I think this is what the markets are seeing, which means that should another shoe drop, of course, it would again be taken as a surprise. Do equity markets now return to their previously scheduled uptrend? I'll take it if that's what the markets offer, heck making money is always easier when the bulls run. That said, I'll sleep with one eye open... and one hand on my Ka-Bar.

Connecticut? No. Bitcoin? So, it would seem. Check this out. As investors looked to move toward safe haven early on Monday, market prices obviously spiked, peaking at $1580 per troy ounce, the highest level seen for that market since the Spring of 2013. Interestingly, the spike in gold prices was indeed mimicked by a simultaneous spike in Bitcoin prices versus the U.S. dollar. Bitcoin topped out above $7900 per, on Monday, a level not seen since... wait for it... November.

Does Bitcoin now offer some measure of safe haven? Do crypto-currencies in general? I, in no way, even begin to pretend to be an expert in this corner of the financial universe. I have never even dabbled, with the exception of investment in some of the miners during that craze. So, why would Bitcoin rally with Gold, with the longer end of the U.S. Treasury curve, and with the VIX, given its reputation for volatility in dollar terms?

Reaching back, one sees that Bitcoin has enjoyed similar spikes in times of localized turmoil... as the Saudi government detained members of the Royal family in 2017, as the Venezuelan economy rolled off of a cliff, as the Chinese yuan eased in value in response to slower growth amid the early days of the trade war. Bitcoin, now this is purely conjecture on my part, remains quite useful as a store of value for wealthier individuals highly exposed to a pressured local currency. One might not be able to get rial out of Iran, or even yuan out of China in a time of crisis, but value stored alternatively in some kind of digital account that does not necessarily recognize national borders? Perhaps the best value for those at risk.

It was with great interest that I latched onto the work of JP Morgan's high profile retail analyst Matthew Boss. His work is always thorough and very hands on. Over the years I have had some success trading the retail space by doing my on field work, albeit, very locally. Ever see the creepy guy counting parking spaces, timing wait lines, walking across department stores looking at just about every price tag while manipulating a calculator. Yeah, that was me.

One position that I took ahead of third quarter earnings was my long in Macy's (M) . For me, Macy's still makes money, and at the time offered a dividend yield of more than 10%. If I was right, the shares were at those lows, undervalued. If I was wrong, I could always place the name on my dividend book. If I was really, really wrong, Macy's would be forced to cut the dividend. I have pointed toward the firm's scheduled investor day at the NYSE this coming February 5th as a potential inflection point for the legendary retailer. This is when I expect to hear a new strategy targeting growth, what to do with the firm's real estate holdings, and let's face it... a three year plan that works better than the one implemented in 2017.

The fact is that I took some good natured ribbing over taking that position. I took some more professionally (names withheld, as I added to the position... you know who you are), and caught a little more as I offered updates on crowd size from the firm's flagship location on 34th Street in New York City throughout the holiday season. My net basis is good, not the absolute low, but down to $14.69. Through the dark hours of Tuesday morning, I see a last sale of $17.22, that's 17.2% for the mathematically challenged. The best part, is that Macy's is still paying investors to hang around, though that yield is down to 8.8%, which is a good thing.

Back to Matthew Boss. Boss still rates Macy's as a Sell, by the way, but as he upgraded Nordstrom (JWN) to Neutral from Underweight, he also mentioned upside potential for same-store sales for Lululemon (LULU) , Boot Barn (BOOT) , Kohl's (KSS) , Macy's, and hold your breath... Gap (GPS) as well as Nordstrom. I had been meaning to get back into Kohl's, another great dividend name, but have been less than enamored with the direction that the firm has taken. I am still on that fence. Lululemon, however is a Sarge name. Let's take a look. 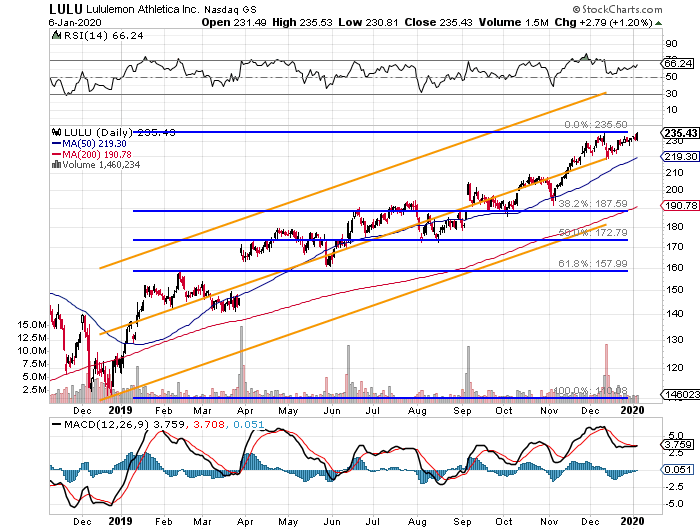 LULU sports improving Relative Strength, as well as a daily MACD that appears to be curling the right way. As the shares have traded sideways for more than a month, the last sale does seem to have adopted the center line of our Raff Regression model as support. This, as the shares attempt to break past the mid-December highs. My target price is currently $245, and I've got to tell you, I am seriously considering an add in this name should the shares take and hold that high, which is something I rarely do this far into a successful trade. I am this close >< to taking my target and my panic point (currently $194) higher. 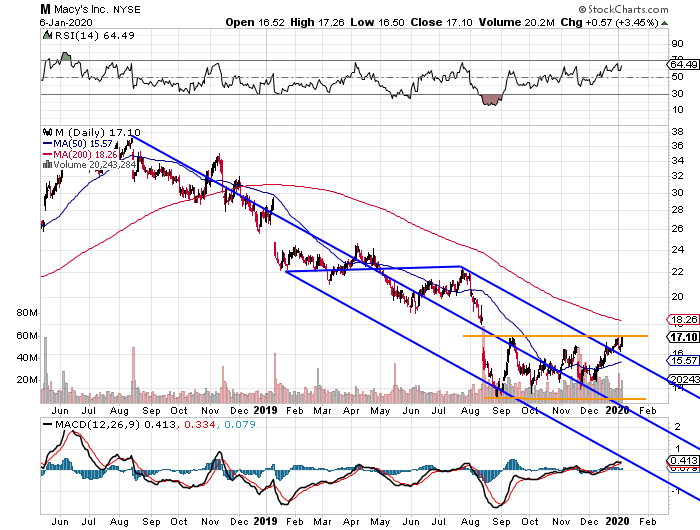 This is another one knocking on a serious door. Viewers will take note of the now broken downward sloping Pitchfork model, as the shares challenge the upper bound of a basing pattern now in place since September. Once taken, more resistance shows up at the 200 day SMA, currently $18.26. Think that's too tight? They're paying you more than 9% just to stick around. Hey, if they blow the investor day, then all bets are off, but I am not selling these shares prior. My target for Macy's has been an even $18. I'd probably still take off a partial there if I saw it. 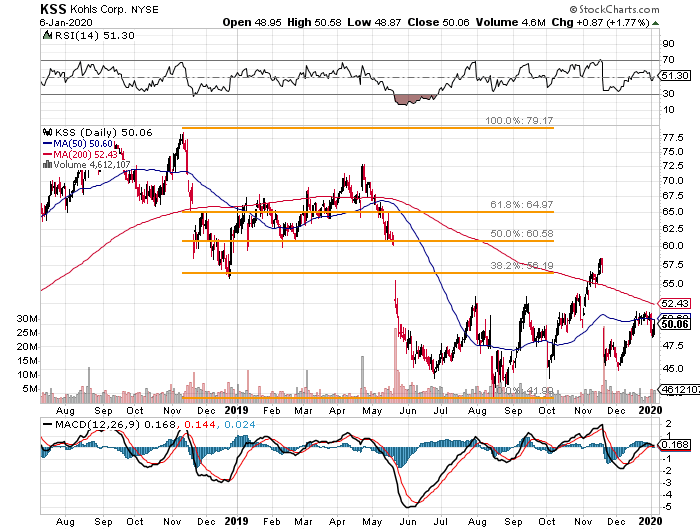 This one is still tough for me. I like the dividend. I like the deal with Amazon (AMZN) . I am not sure that I truly understand the deal with Planet Fitness (PLNT) . The rally in November more or less failed in between Fibonacci retracement levels. One might say that if that rally, which came into earnings were omitted (taking a liberty there), that the shares have based.

Relative Strength is "meh", The stock's daily MACD has curled the wrong way. The 50 day SMA of $50.60 and the 200 day SMA of $52.43 stand as obstacles that portfolio managers will likely respect. I can see an investor with an income driven objective taking a stake in this name. As a trader, I am not quite there yet.

There are no significant earnings releases scheduled for today.

Get an email alert each time I write an article for Real Money. Click the "+Follow" next to my byline to this article.
TAGS: Gold | Investing | Markets | Stocks | Technical Analysis | Trading | Retail | Cryptocurrency | Stock of the Day