Steiner explained that Veru's goal is to change the standard of care for patients diagnosed with breast or prostate cancer. He said those with breast cancer don't want the side effects of traditional chemotherapy, which is why Veru's treatment, which received positive Phase II trial data Monday, is an oral pill that can be taken at home instead of having to receive chemotherapy.

Unlike chemo, Veru's pill eliminates the typical side effects and has the added benefits of increasing function and building bones. The company expects a Phase III study, which will include 240 patients, to be concluded in 18 to 24 months.

Veru's prostate cancer treatment has a similar profile, Steiner said, and is simply a pill that can change the standard of care for the most common form of cancer in men.

Let's play doctor and check out the charts of this patient.

In the daily Japanese candlestick chart of VERU, below, we can see that the shares declined from late January until late October -- not the picture of the next big rally. Monday's candle pattern is likely a high wave candle or a long-legged doji -- both of which can mark a price high. Prices were below the moving averages until November.

Trading volume was very light until recent days when it surged dramatically. The On-Balance-Volume (OBV) line was flat until it turned sharply higher this month. The Moving Average Convergence Divergence (MACD) oscillator turned bullish in November so there was some advance notice.

In the weekly Japanese candlestick chart of VERU, below, we get a different perspective. The daily chart shows a decline for much of 2020 but this chart shows a base pattern for 2017 and 2018 followed by a rally into early 2020. The base around $2 gives a more constructive picture. Prices are extended above the rising 40-week moving average line so a correction is likely at some point.

In this weekly Point and Figure chart of VERU, below, we can see that prices broke out at $10 and there is a potential $26 price target. 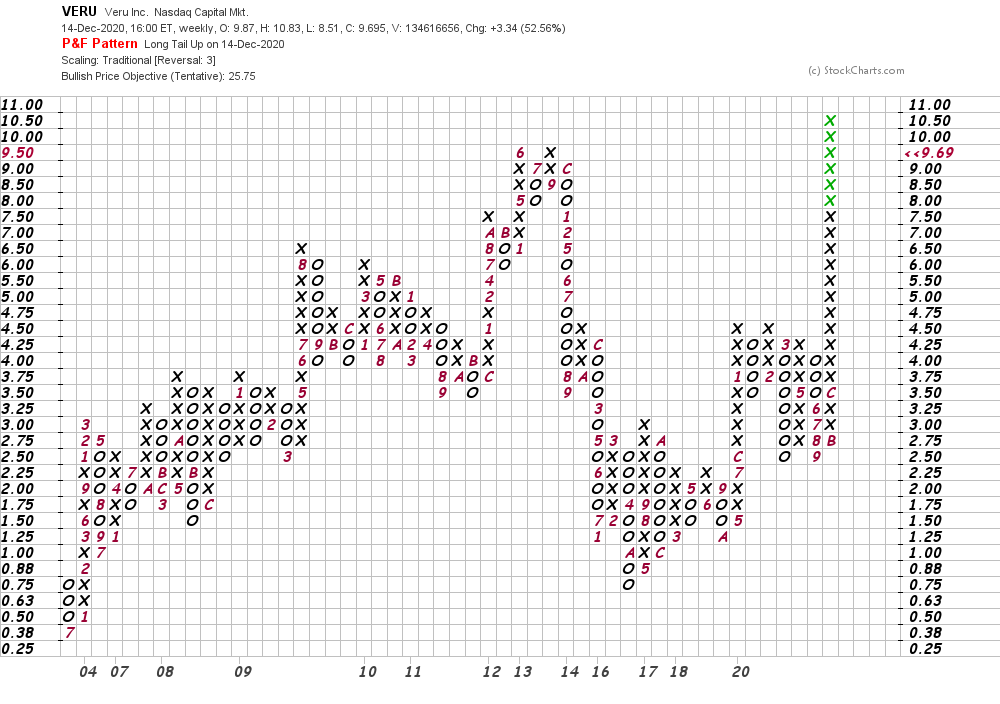 Bottom-line strategy: A new treatment for these two cancers is very exciting and could be a real blockbuster, but we may not know the results of the Phase III study for two years. Prices are extended (overbought) so this is more likely a time to take profits and let a correction unfold.

Get an email alert each time I write an article for Real Money. Click the "+Follow" next to my byline to this article.
TAGS: Drug Approvals | Investing | Technical Analysis | Biotechnology | Pharmaceuticals | Mad Money | Executive Interview