In his second "Executive Decision" segment of Mad Money Thursday night, Jim Cramer sat down with Jean-Jacques Bienaime, chairman and CEO of BioMarin Pharmaceuticals (BMRN) , the orphan drug maker that's seen its shares plunge from highs of $100 down to lows near $63 as biotechs have fallen out of favor on Wall Street.

BioMarin updated investors at their annual investor conference, and Bienaime said they expect continued annual growth of 15%, just as they have for the past few years. He said their drug pipeline continues to be strong.

BioMarin's seven products are on track to deliver $2 billion in revenues, Bienaime added, and they expect to file for FDA approval for their next drug before the end of 2019.

Cramer said shares of BioMarin are incredibly cheap and he would be a buyer at these depressed levels. We looked at BMRN earlier this week where we concluded that, "BMRN has been going straight up since early October and I think the odds favor further gains with a Point and Figure target of $95."

In this daily bar chart of BMRN, below, we can still see that things have continued to strengthen. Prices are still above the 50-day moving average line and because it is a "moving" average the older numbers are dropping off and the slope of the average line is about to go positive.

The daily On-Balance-Volume (OBV) line remains pointed up telling us that buyers of BMRN are being more aggressive. I think this is interesting behavior by buyers who could just wait and let prices come to them after the decline we have seen over the past year.

The Moving Average Convergence Divergence (MACD) oscillator is still above the zero line but some narrowing of the indicator can be seen.

In this weekly bar chart of BMRN, below, we can see little change since our last review but we can reiterate that is appears that it looks like prices are making an important reversal in the fourth quarter.

If I was writing a story on which stocks could make surprise rallies in 2020, BMRN would be on the list.

In this Pointed and Figure chart of BMRN, below, we can see that a trade at $75.96 will refresh the uptrend. Not much to ask for today or in the next few days. 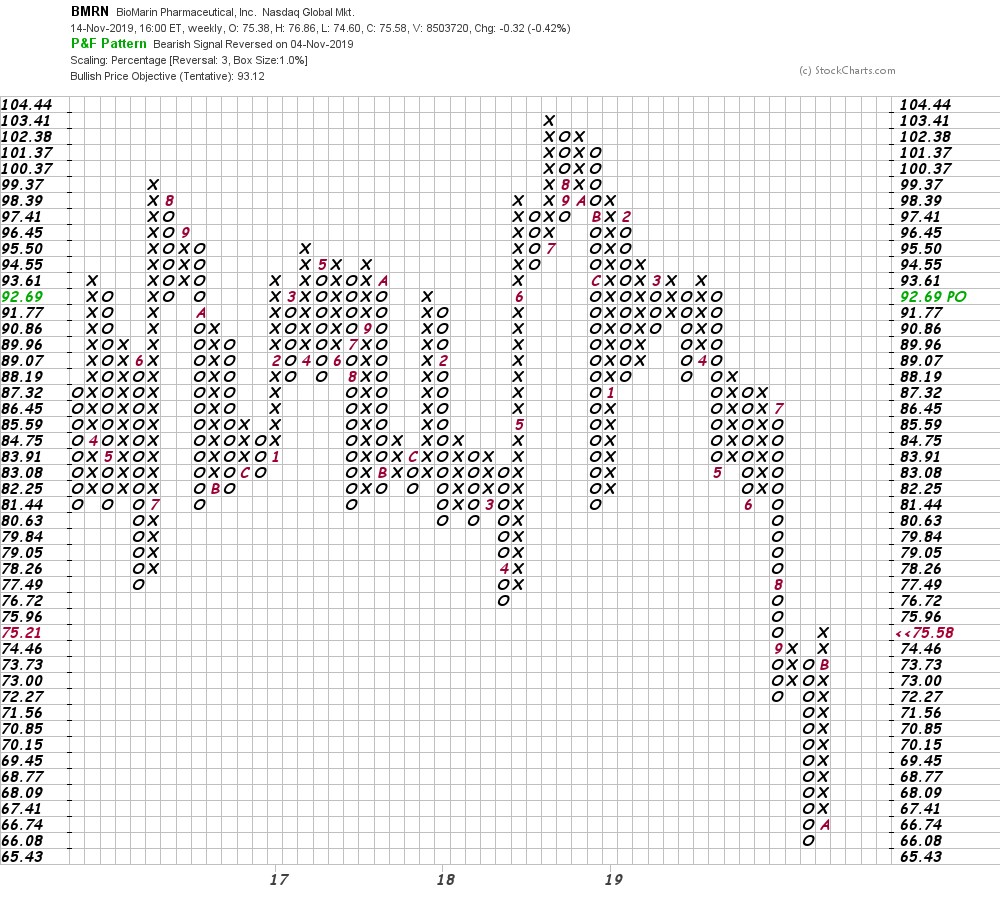