In another of his "Executive Decision" segments on Mad Money Wednesday night, Jim Cramer checked in with Dr. Vlad Coric, CEO of Biohaven Pharmaceutical Holding Co. (BHVN) , which recently received approval for Nurtec, its oral treatment for migraines.

Coric said that not only has Nurtec received approval for the treatment of migraines, they are also getting positive results from their prevention studies as well.

Cramer noted that Nurtec is proving to be a much-needed supplement for monthly injections for migraines, which often see patients suffer breakthrough headaches during the week before their next shot.

Coric said that Biohaven is offering telemedicine appointments with doctors to help patients get easy access to the drug.

Let's check out the charts of BHVN.

This trend following technique can be successful in long-trending markets but like other things can generate whipsaws and false signals. The trading volume does not show me anything positive like heavy turnover into the low which would suggest that buyers were more aggressive at the lower price levels.

Notice the continued decline of the On-Balance-Volume (OBV) line. Sellers have been more aggressive the past year and have not reversed that trend yet. The 12-day price momentum study in the bottom panel of this chart shows lower lows from February into March and thus no bullish divergence and no slowing of the decline.

In this weekly bar chart of BHVN, below, we still see a bearish picture. Prices are below the declining 40-week moving average line as they retest the lows of late 2018.

The weekly OBV is pointed down, telling me that sellers on this time frame have been more aggressive for the past 12 months.

The Moving Average Convergence Divergence (MACD) oscillator is in an outright sell mode below the zero line. The oscillator has begun to narrow but that means a cover shorts buy signal is weeks away.

In this daily Point and Figure chart of BHVN, below, we can see that prices made a low and then a higher low but the charting software has not generated an upside price target which tells me that we have not seen much accumulation (buying). 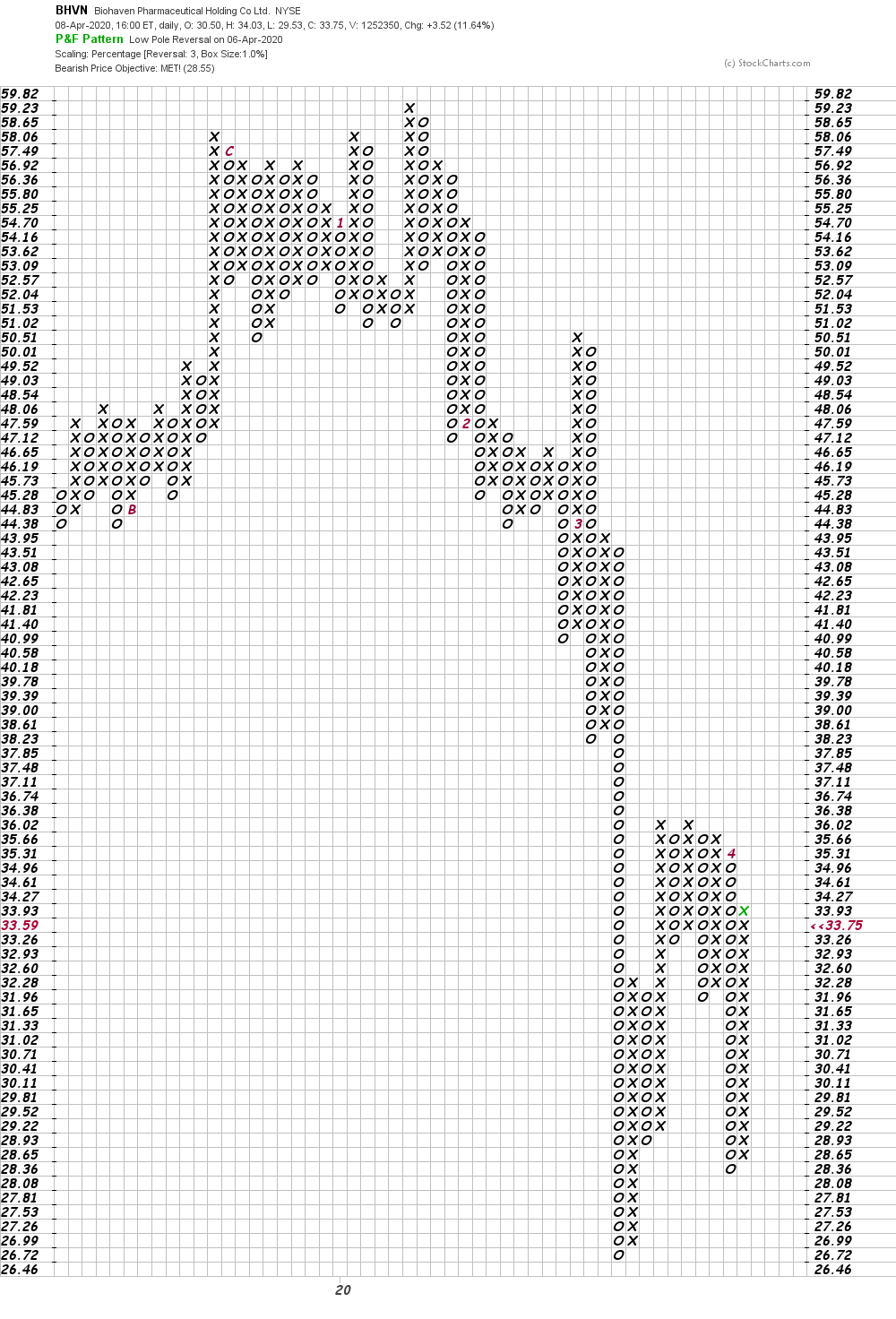 Bottom line strategy: You can't rush drugs to market and you can't rush a market bottom. Every stock takes its own path at its own pace. Right now I do not see enough evidence that BHVN has bottomed and an upside move is pending. Avoid for now.

There's No Motivation to Put Cash to Work Right Now

It is painfully obvious what's going on right now.

Buy This Dip in Apple Shares

AAPL had a better quarter than you think, and is set up for accelerated success in the future.

Patience may be required before attractive opportunities appear.

Tupperware Is the Comeback Stock of the Year