Coric said they've seen explosive growth in Nurtec since its debut with prescriptions surging over 200,000.

When asked how the drug works, Coric explained that Nurtec is a targeted therapy that zeroes in on the pain receptors for migraines and stops the pain, and cascading symptoms, fast.

Biohaven is currently awaiting FDA approval for Nurtec to also become the first drug approved for the prevention of migraines as well.

Let's review the charts. We last looked at BHVN on July 30 and wrote that, "BHVN has made a relatively big advance since April and a period of consolidation or sideways price action is probably likely at this time. With some bearish divergences seen in the daily and weekly OBV line I would wait before probing the long side despite a $94 price target from the Point and Figure chart."

BHVN did indeed trade sideways into early October and then resumed its advance to our $94 price target. Now what?

The On-Balance-Volume (OBV) line has improved from August/September but it has not broken above its June high and that makes it a bearish divergence when compared to the price action.

The 12-day price momentum study shows a slightly higher high in November than October. This confirms the price action but further price gains are likely to result in a bearish divergence.

In this weekly Japanese candlestick chart of BHVN, below, we can see a spinning top pattern at the high. This pattern shows up that there is not much difference from the open of the week to the close of the week which tells us that the bulls and bears are in a balance. This balance can mark a reversal from up to down or from up to sideways.

Prices are above the rising 40-week moving average line. The weekly OBV line has made a new high for the move up from the late April low to confirm the price gains.

The 12-week price momentum study shows equal highs from June to November and that is a significant bearish divergence and can foreshadow a high or top reversal.

In this daily Point and Figure chart of BHVN, below, we can see a potential price target in the $115 area but we can also see that a trade at $92.69 could weaken the chart. 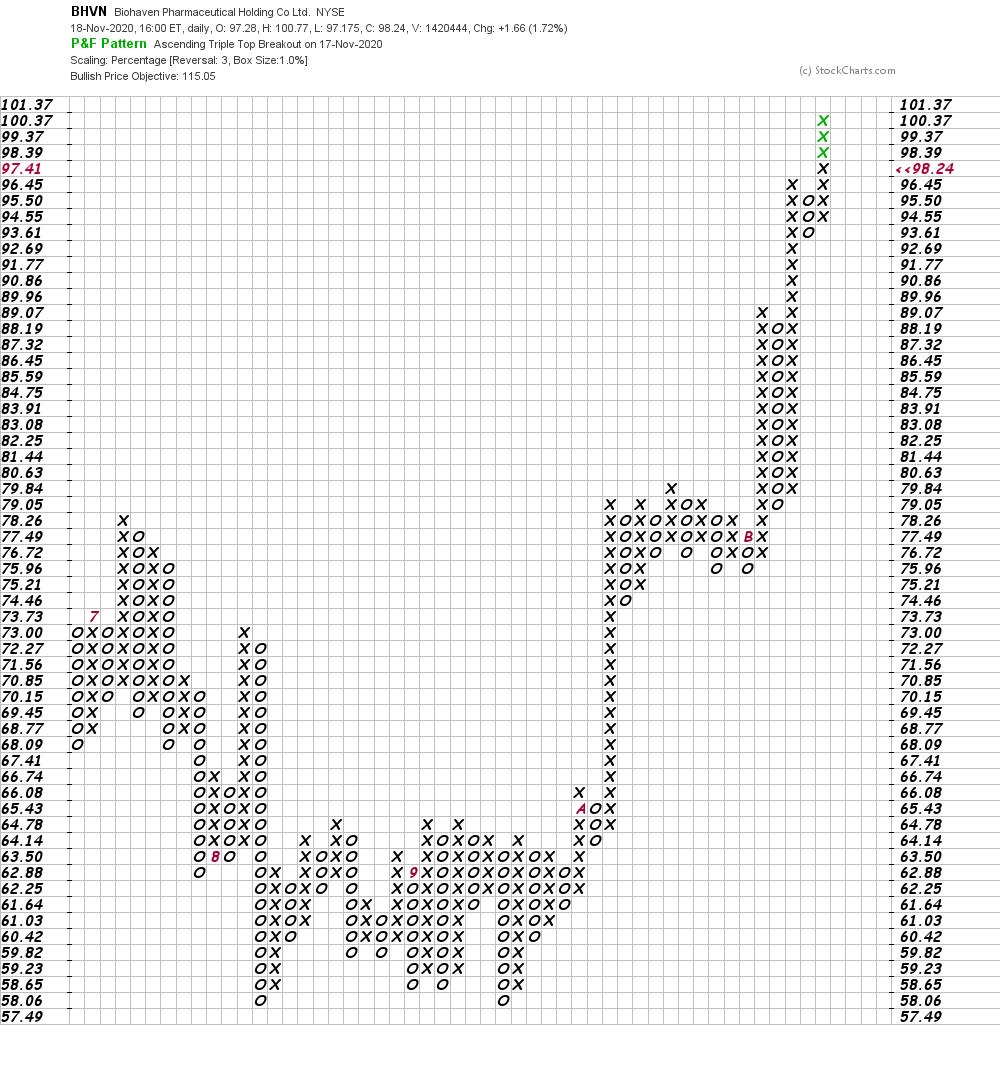 Bottom line strategy: The three charts above show some bearish divergences and that tells me that we could witness a correction or pullback in the weeks ahead. Take profits or raise your stop protection.

Time For a Breather

After seven straight days of gains, the S&P 500 is due for a rest.

Let's review the charts and indicators of this railroad giant.