There is no denying... well almost no denying that Thursday's action across equity markets was quite constructive. You know I'll find something I don't love, and I'm not talking about that late bit of profit taking that took some of the luster off of the day's shine. Finding cracks in the armor, or for that matter, cause for optimism when the place is on fire is kind of what I do.

The very first thing I see is that the day ended three day losing streaks for both the S&P 500 and Nasdaq Composite, and ended those streaks somewhat decisively. Capital also flowed into the longer end of the U.S. Treasury yield curve forcing the yield for the 10 Year Note lower... and that has continued overnight. Morning sunlight is still a few hours off, and I see 10 year paper giving up little more than 1.62%. Yes, despite the Philly Fed's screaming inflationary survey results that confirmed similar read-outs taken earlier in the week from the Empire State Manufacturing Survey.

This would be why "growthy" type sectors such as Technology and Communication Services led performance for a second consecutive day. This is why the banks did less well, and why the bottom of the daily performance tables also for a second straight day was littered with the types of stocks that we refer to as cyclical in nature. Perhaps some of this was simply money in search of some kind of alpha... returning to equity markets as cryptocurrency markets quieted down after the White House made clear that closer IRS scrutiny is headed that way.

Market breadth was overwhelmingly positive on Thursday. Winners beat losers at the NYSE by more than 2 to 1, and by 5 to 2 at the Nasdaq. Advancing volume beat declining volume by 3 to 2 at the Big Board, and by more than 3 to 1 up at Times Square. The Dow Transports interestingly did not participate to the upside, instead posting a fourth consecutive daily decline. Weakness in transportation was broad across the airlines, and even logistics, trucking, and the maritime space as Ryder (R) , Landstar (LSTR) and Kirby (KEX) all took beatings in the order of multiple percentage points. Key to note that the rails and delivery services type names outperformed other transportation based industries.

Technically, the broad set-up is clearly improving. Take a look at the following charts... 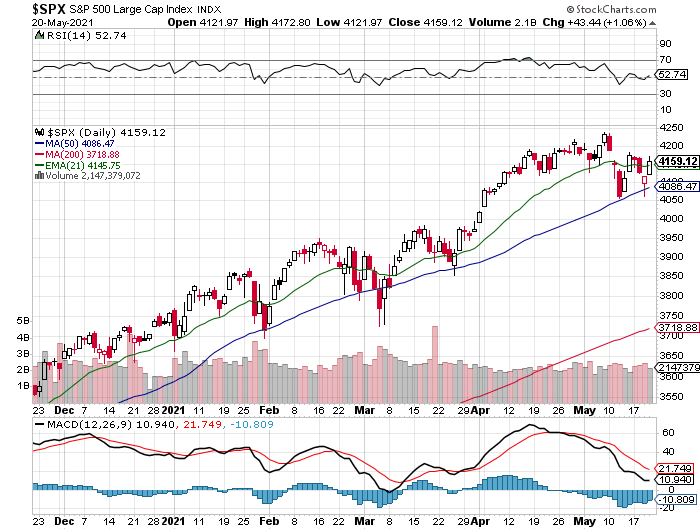 The S&P 500 bounced off of its own 50 day SMA on Thursday for the second time since last (not this) Wednesday, and this time... took and held the 21 day EMA. The index is nowhere near being "technically" overbought, as below the chart, you'll see that the daily MACD, while not positive looking, is showing signs of the 12 day EMA curling toward the 26 day EMA, while both remain above zero. An actual crossover (black over red to the upside, while above zero) would be confirmation of a positive move.

While this may sound like "mumbo jumbo" to the layperson, to the professional trader this signals that either I am ahead of myself (always possible) or this rally has room to run. Now, if you find the daily chart of the S&P 500 intriguing, your nerdy little heart is totally going to dig what you'll see in the Nasdaq Composite. 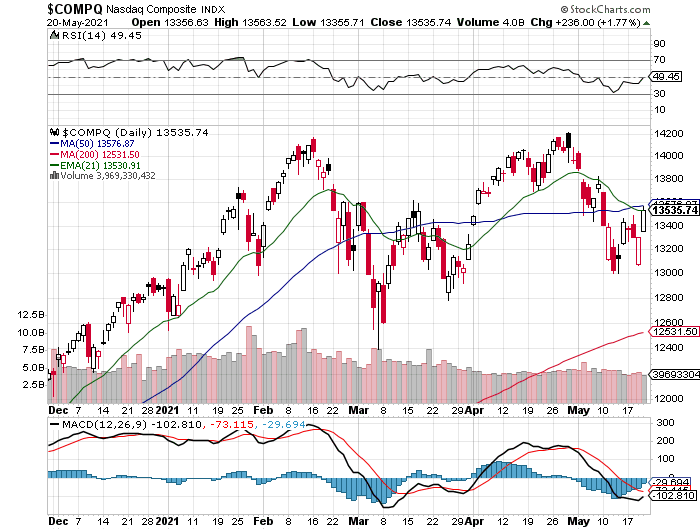 Here, you'll see the Composite taking and holding (by a whisker) the 21 day EMA, which may have held some swing traders in place (I don't know too many who trade off of the index itself, but some do day trade futures based on index charting). That said, the index failed in front of the 50 day SMA, which is where we know enough portfolio managers await. Now... one more chart. Hope you're willing to "nerd" out a little more with me here. 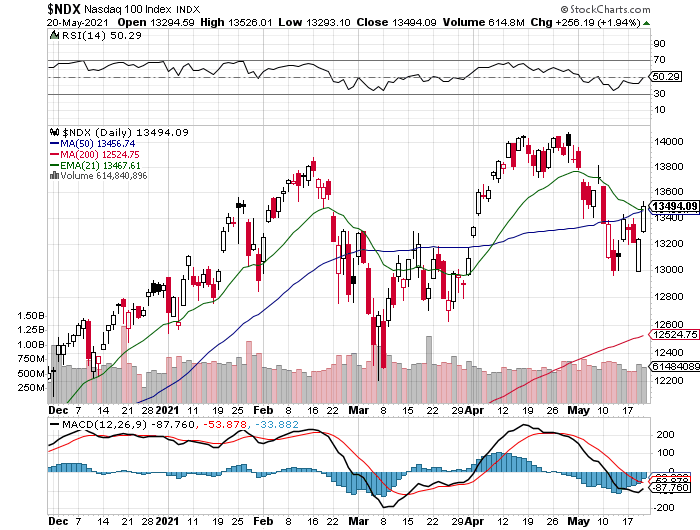 You'll see the Nasdaq 100, which excludes financials and thus... is even more tech focused than the Composite has now taken (and held) both the 21 day EMA (bring the swing traders on board) and the 50 day SMA (provoking professionally managed money). This confirms what we already kind of knew. Investment is rotating out of value (the banks, energy) and into growth (the semis, the cloud, the internet) this week.

Hope I've kept this straightforward enough. The implication is that traders have bought into the move, and at least some portfolio managers have taken a bite, but not with the kind of conviction we need to see to feel free of recent market pressures. Today (Friday) is a big day. A big game. We need to see the Nasdaq Composite take that 50 day line, while the S&P 500 and Nasdaq 100 at least hold those key levels.

These major large cap indices have not yet broken out of months of trading sideways, but there is now perhaps the best chance that we have seen in a good while for a resumption of the upward trend. Notice the succession of higher lows for both of these Nasdaq indices. Now, if only somebody could get on base.

The Death of Cash (and Cryptos)?

Not yet, anyway. Fed Chair Jerome Powell did something he never does. He filmed a video for the Fed's website. To discuss the coming of a Fed "Paper" this summer that will be meant to "stimulate broad conversation" concerning a "Central Bank Digital Currency" that Powell at least says would "serve as a compliment to, and not a replacement of, cash and current private-sector digitale forms of the dollar." I call it BS. As we know, the Chinese government is already going down this route and at least my guess is that the Fed, the European Central Bank, the Bank of Japan, and the Bank of England really can not be too far behind.

Powell on the video, also said "Cryptocurrencies have not served as a convenient way to make payments, given, among other factors, their swings in value, Stablecoins aim to use new technologies in a way that has the potential to enhance payments efficiency, speed up settlement flows, and reduce end user costs, but they may also carry potential risks to those users and to the broader financial system."

Does not everyone see what's coming? Now, this is just opinion, my opinion, so it may not be worth much. That said, I see this as the beginning. The beginning of a power play by major central banks and their national Treasury Departments. The beginning of the end for not digital assets, but digital assets meant to act as currency outside of national or global money supplies. The beginning of the end of non-taxable or hard to track transactions, to include not just those paid in cryptocurrencies but also actual cash in the form of paper and coin. Pay the kid next door 20 or 30 bucks to shovel the snow off of your walk, and the IRS will know immediately that this kid has some income.

"Cash" will ultimately be stored (digitally) wherever it is stored now... in a bank, in the kinds of accounts where it already exists, except in that fire box under your bed. That cash will eventually be outlawed. You won't go to jail for not depositing it, you will just lose its perceived value as hard cash will no longer be considered legal tender. This is not imminent, but it is coming. Criminals, terrorists, and off the books type workers will find a continuance of those types of funding activities more difficult.

There will be more legitimate problems. Especially once revenue starved governments turn to taxation on savings accounts in order to maintain the pace of federal expenditures. That will certainly cause for a time, public outcry. Then there will be events such as storms that will knock out electricity on the regional level for days, or more. That's already the problem with current cryptocurrencies. They are worthless once the lights go out.

The answer? Prepare. There could be a return to an underground "barter" system that has always existed in less developed, more agriculturally based economies. We don't know that in a crisis, physical gold and silver will serve as "illegal" tender on the local level. It is however,. the best guess we have. So, filling that lock box with a few coins here and there might be wise. Stocking up on potable water might be a good idea as well.

Sarge fave Applied Materials (AMAT) not only ran more than 4.4% into the firm's fiscal second quarter earnings on Thursday evening. The firm topped top and bottom line expectations while experiencing a significant widening of both gross and operating margin. Then, Applied Materials increased Q3 guidance for both sales and profitability. 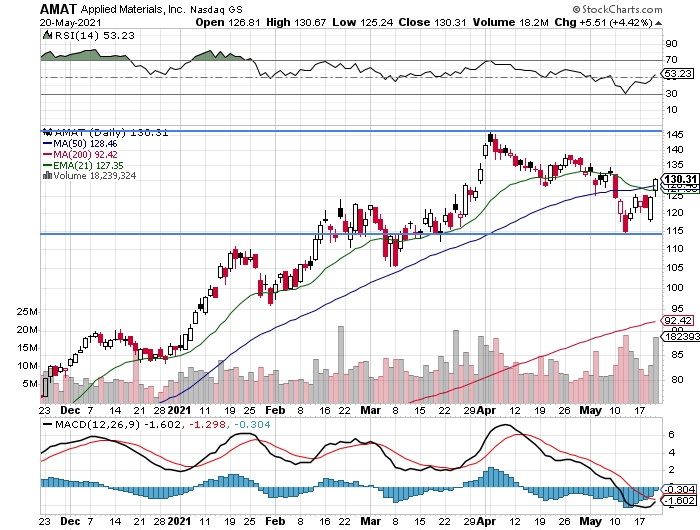 Readers will note that on Thursday, AMAT took both the 21 day EMA and 50 day SMA, with an eye on a $146 pivot to really break out. That would place my target price at $175. Peers. Lam Research (LRCX) and ASML Holdings (ASML) are behaving similarly, while KLA Corp (KLAC) is slightly behind technically.

(NVDA and AMD are holdings in Jim Cramer's Action Alerts PLUS member club. Want to be alerted before Jim Cramer buys or sells these stocks? Learn more now.)

Get an email alert each time I write an article for Real Money. Click the "+Follow" next to my byline to this article.
TAGS: Bitcoin | Currencies | Economic Data | Federal Reserve | Investing | Markets | Stocks | Technical Analysis | Trading | Cryptocurrency