Financial Violence. The large carnivores disappeared as their prey disappeared. Even the herbivores had to adapt. The only survivors were those either well suited to this new environment or who consumed little in the way of resources to begin with. The skies grew dark. The clean air grew thick with debris. The lush forest turned barren.

Now, global and domestic economies weaken. Central banks are mixed. Western central banks prepare to combat inflation, while eastern central banks appear to be going a different route. All, while supply chains remain hampered by China's "Zero Covid" policy, as lessons still seem unlearned, and U.S. seaports still for some reason remain the only seaports in any developed economy not working 24/7 to off-load vessels lined up and waiting.

The only thing about this big bang is that it hasn't happened yet. There is no fear. The VIX still trades in the low 20's. Put/Call ratios remain mildly elevated. We know where these metrics go when the good people of Gotham are frightened. They are not frightened. Perhaps they will be. We hope not, but there are rarely seen creatures that hunt these woods. Some say they exist only in mythology. That said, the old ones remember. Natives have told tales learned from ancestors down through the ages... of the "bond vigilantes."

On Friday, Retail Sales rolled off of a cliff, followed by Industrial Production and Capacity Utilization. The Atlanta Fed's GDPNow model for fourth quarter GDP now signals a year end nose-dive for U.S. economic activity. Did it carry over into the new year? On Tuesday, the New York Fed's Empire State Manufacturing Index collapsed at the headline as New Orders (the very lifeblood of any manufacturing survey) printed in outright contraction for January. Uh oh. All eyes, at least all macroeconomic eyes, now turn to Thursday's "Philly Fed" survey. The Empire State is one thing. Important, but it's not Philly. We see the same kind of drop-off in economic activity across the Philadelphia district?... and then maybe Richmond?... and then we know we have problems.

Financial markets are now pricing an FOMC potentially even more aggressive in fighting consumer level inflation than expected just a few days ago. The immediate problem? The Fed can not fix scarcity. Only a reduced dependence on far flung supply lines extended through unpredictable foreign governments and a U.S. Department of Transportation far more on the ball than this one can ease those problems.

Of course, if need be, the Fed is sitting on a $9T balance sheet. As the central bank artificially kept rates low, they could by design force these artificial rates higher at any point in the curve they deem necessary. Now, that would make funding the federal government, or your household more expensive. That may (would) force recession. Is the Fed going to lead the vigilantes? Don't be ridiculous. Would you have ever believed that the Fed would have gone as far over the past two decades as they have? You would not have believed it at the start. Anything and everything is possible.

Futures trading in Chicago are now pricing in a 5% probability of a rate hike on January 26th, and a 5% chance for a 50 basis point increase on March 16th. Both are outlier bets, but there is a market. These markets are now close to fully pricing in an entire percentage point (100 bps) worth of increases for the Fed Funds Rate by November and almost a 50/50 shot at another 25 bps in hikes by December. What would you do, if you were an algorithm? That brings us to...

The Nasdaq Composite surrendered 2.6% on Tuesday, taking the index down 7.27% year to date, as well as 9.7% off of its November high. "Correction", the amateurs will shout at 10%. Everyone else with a little experience knows that there is no textbook definition for such things. This index and growth stocks have been correcting since late December. 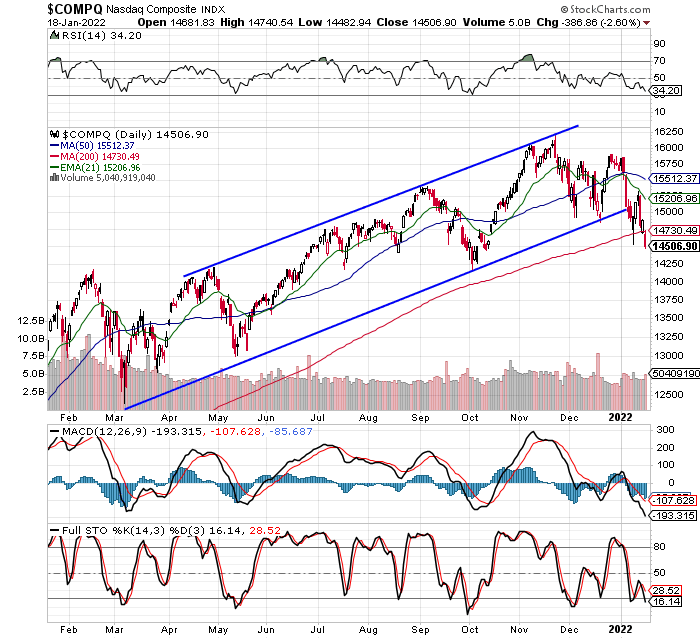 This index has broken channel support and has now lost the 200 day SMA and not regained that level by the close for the first time for the first time in 21 months. The daily MACD and Full Stochastics Oscillator are both close to being technically oversold, as Relative Strength just is not quite there yet.

The S&P 500 gave up 1.84% on Tuesday, but is only down 3.97% year to date. There are more businesses here less reliant upon loose policy for survival, hence a bit more evident resilience. That said, 10 of 11 S&P sector-select SPDR ETFs closed in the red on Tuesday, with only Energy (XLE) seeing any green by day's end, up 0.4%. Nine sectors closed down more than 1% for the session, while two sectors backed up more than 2%, led lower by Technology (XLK) . Within that sector, the Dow Jones US Software Index took a 2.39% beat-down (some cybersecurity names did put up a fight), while the Philadelphia Semiconductor Index was nearly obliterated at -4.44%. 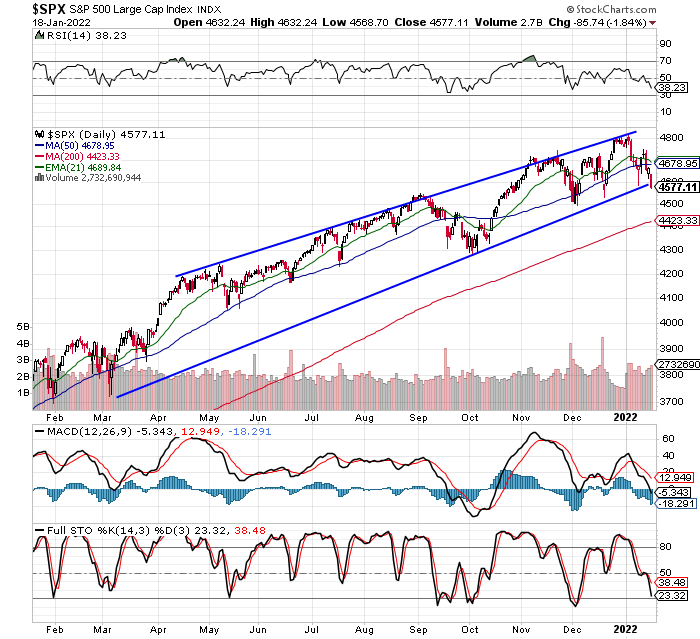 The S&P 500 will wake up on Wednesday with a decision to make. This index is in better technical shape than is the Nasdaq Composite and has not yet truly broken channel support. That said, this index has not only lost the 50 day SMA, it has broken contact as the 21 day EMA appears set to cross below that line, which could be truly dangerous. None of my three main indicators is truly yet technically oversold for the S&P 500, but all three are ringing the doorbell.

Losers beat winners at the NYSE by almost six to one, and at the Nasdaq by almost five to one. Advancing volume composed 16.6% off the NYSE composite and 26.9% of the Nasdaq market site composite. Aggregate trading volume increased 10% for NYSE-listed names on Tuesday from Friday, while the aggregate increased some 18% for Nasdaq-listed names.

1) Early 2021 U.S. federal government policy error? There's more to it than a tough political environment, but it certainly didn't help.

2) The Omicron surge did not negatively impact demand anywhere near expectations.

6) Gas to Oil switching at power stations across Europe and Asia.

8) OPEC+ has stuck to a plan agreed to last July to increase production by just 400K bpd. There is fear that not that much excess capacity even exists.

My Thoughts? Stick to U.S. Permian based producers. The Permian has no choice at these market prices and in this demand climate, but to come alive as never before. It has already started and is the basis for my long positions in ConocoPhillips (COP) and APA Corp (APA) , which is the parent of Apache Oil. I am also carrying Chevron (CVX) in this space.

1) Ford Motor (F) announced on Tuesday night that the firm would recognize a gain of $8.2B on it's equity investment in Rivian Automotive (RIVN) . Ford will classify its non-cash gain on Rivian as a special item, meaning that this investment's performance will not be included in either adjusted earnings results nor adjusted EBIT, either for the fourth quarter (due in early February) of going forward.

2) Finally. SoFi Technologies (SOFI) announced early on Wednesday morning that the Office of the Comptroller of the Currency and the Federal Reserve have approved the firm's application to become a bank holding company (gain a national bank charter) through it's proposed acquisition of Golden Pacific Bancorp, operating its bank subsidiary as SoFi Bank, National Association. SoFi Technologies will become the parent of SoFi Bank on completion of that deal, and plans to contribute $750M in capital while maintaining Global Pacific's community bank business and footprint. What this does for SoFi is allow the firm to lend more competitively while improving margin as SoFi will be able to lend from deposits rather than have to borrow in order to lend.

The lions at Pretoria Zoo in South Africa have apparently been infected with symptomatic Covid-19 by asymptomatic handlers. This after minks in Denmark and hamsters in Hong Kong have had to be culled in an effort to prevent the passing of this virus back and forth between humans and animals. Looks like the "cat" is out of that bag. In short, this means that the SARS-CoV-2 coronavirus will likely mutate forever unless we can vaccinate the entire animal kingdom, or animals start wearing masks and socially distance themselves from one another.

(Ford and Morgan Stanley are holdings in the Action Alerts PLUS member club. Want to be alerted before AAP buys or sells these stocks? Learn more now.)

Get an email alert each time I write an article for Real Money. Click the "+Follow" next to my byline to this article.
TAGS: Earnings | Economy | Investing | Markets | Oil | Rates and Bonds | Stocks | Technical Analysis | Trading | Treasury Bonds