He's a big time tax attorney now. Very well known in his field. Always was a smart kid... especially when it came to math. He was a Yankee fan, even though he grew up in Queens. I still liked him. I don't remember what year. In my mind's eye, we'll call it sixth grade. My childhood friend raised his hand to answer a mathematics question posed by the teacher. His answer was incorrect, which was unusual for him. He then proceeded to take the sharpened pencil already in hand, and stab himself in the top of the skull. Blood everywhere.

He would later let his pals know that he thought he was hitting himself in the noggin with the eraser end of the pencil. That, however... was how the legend would play out in the playground. In the playground, the math kid got one wrong, and went nuts. I still chuckle so many decades later, recollecting what the kids out in the yard chose to believe that day. As for my friend, other than freaking out a classroom, there would be no lasting effects. Sometimes you just don't know. You just know what you see. We then fill in the empty space left by less than complete information. The result is conjecture.

Monday night, one could smell the fear. Stuck in an airport in Dallas. The televisions that I could see appeared concerned enough about the market rout. There had been a clear increase in volume, a clear increase in what we would call institutional participation. It all culminated on a Monday that came after a volatile week, as the trade condition, and more honestly, the national security situation in regards to the nation's relationship with China had deteriorated. In the two days since, equity markets have found some footing. The major indices have hit firm support at their 200 day SMAs, while both the Nasdaq Composite and the S&P 500 have made failed runs at regaining their 50 day lines. Obviously, regardless of direction, the Information Technology sector remains a leader. Paradoxically enough, the semiconductors run ahead of the pack because of their exposure to China, while the software/cloud names run because they are less exposed. My better bet will remain on the cloud until the direction that global business has to move toward changes fundamentally.

More important than equity markets are debt markets. Is the newly re-inverted U.S. Treasury paper yield curve a problem? Heck, if any of us knew for sure, we would act on that information ahead of the rest of you. Count on that. We love you, but we are mercenaries first.

Clearly, the domestic economy slowed down in April. Call it whatever it is you want, but declines (not slower growth) for both retail sales and industrial production on a month over month basis do rattle model snapshots for GDP. The Atlanta Fed, far more accurate than most others at indicating quarterly economic growth in the recent past, now had the second quarter growing at just 1.1%. That number will change again later this morning after April Housing Starts hit the tape.

There are many intellects at the Federal Reserve Bank that have written on the yield curve. Historically, many traders have watched the two year/10 year spread as an indicator of future economic contraction. Many at the Fed consider the three month/10 year spread to be the most accurate harbinger of lurking darkness. What does it mean if the one month T-bill inverts all the way through that 10 year? Right now, as we think about these things... through the zero-dark 30 hours, U.S. one month paper yields just 40 basis points less than 30 year paper. Screwed for life? That's what the bond market is saying if you're my age.

Oh, don't fear. There are only two conditions of existence. There are the games that we have won, and the ones we are still trying to figure out. There are no defeats, unless you are defeated. Whether or not you are defeated is up to one person. There is not one other person on this planet who can force surrender upon the individual. Remember this til your last breath. Far better to die this morning in a state of grace with honor intact than to live a thousand years any other way.

The president has done his part. For years, Ben Bernanke and Janet Yellen called out for fiscal help as they poured monetary kerosene on the fire. The roles have reversed, and the administration has poured on the stimulus and now asks for help on the monetary side. Perhaps it is a good thing that here in the U.S. our fiscal and monetary policy makers never dance to the same tune at the same time. Oh, I am sure that we would then see some ridiculously robust numbers for growth, but then where would it stop? Could it stop? You think your savings are worthless now. Your savings are "as good as gold" as long as there is still faith in fiat currency, and for now, there surely is. For now.

Is a recession coming? Are the demographics of a nation working against the ability to prop up a super-sized fiscal infrastructure? You already know the answer. You just don't know when, or what measures we'll take that will both lessen the short-term negative impacts while ensuring a life sentence of mediocrity and dependency at best.

Yes, we are still in a Cold War. I am sure that you have noticed the executive order that will ban the use of telecommunications networking gear and services sold by foreign adversaries. This is obviously targeted, in my opinion at Huawei and ZTE (ZTCOF) , and yes this is necessary. It is believed by some that firms such as Huawei serve to gather intelligence on behalf of the ruling Communist Party in China. Do I know this for sure? Of course not. I only know what I read.

I do know what it is like to be in a moving vehicle that relies on a military version of the internet for purposes such as location, targeting, and identifying friendly forces. Should the underlying infrastructure for simple command and control of forces in a tactical situation ever be sold to contractors, even domestic contractors that themselves rely upon parts sold to them by questionable partners... just how unacceptable would that be?

This is where delaying auto tariffs for up to six months could be a master stroke. Should this serve as something as a carrot to the stick approach in aligning other nations that surely must have problems with China's behavior in the global marketplace, this move will serve it's purpose.

This is a name that I am along, and have liked for quite some time. On Wednesday night, the firm reported beats across the board, most notably in Security, but also in Infrastructure Platforms and Applications. In short, Cisco (CSCO) has learned to adapt to the modern environment for the evolution of business technology, acquiring what it needed, as the legacy businesses that involved selling routers and switches have moved past maturity.

Key last night, I thought... was the firm's revenue guidance for the current quarter, and even more importantly, CFO Kelly Kramer's acknowledgement that the firm had greatly reduced Chinese exposure to their supply chain. This is business by the way, and not just for Cisco... that China may never regain, once it finds a cheaper home. 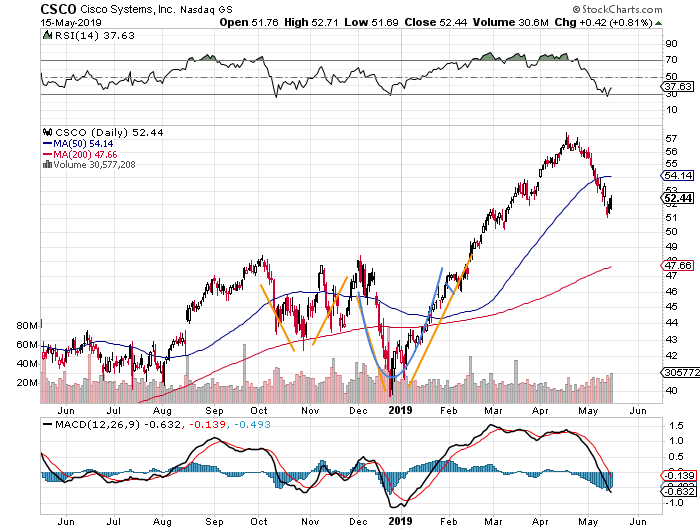 I see two "sort of" formations here that produced the recent pop for this name. You might see a (weak) double bottom in yellow that produced a bullish pivot at the $49 level. You might also see a cup with handle in blue that produced a pivot just above $47. My price target has been $60 for this name, and as tensions with China hot the marketplace, this target seemed to be tougher to take than the bridgehead at Arnhem Road.

How priced in is a tough quarter, and tougher guidance for Nvidia (NVDA) ? Hard to say. We already know that Intel (INTC) has sent flares up regarding second half guidance. Does that bode poorly for Jensen Huang? The trade condition with China is a big deal here. Can not be understated.

What if gaming remains weak? Gaming is the firm's largest slice in terms of revenue contribution at 43%. In terms of growth, and margin, the data center would be the focus. Does the data center continue to show softness? Do potential synergies created by the Mellanox acquisition provide something that Intel just did not have. China, as already mentioned, matters greatly to both of these business lines. 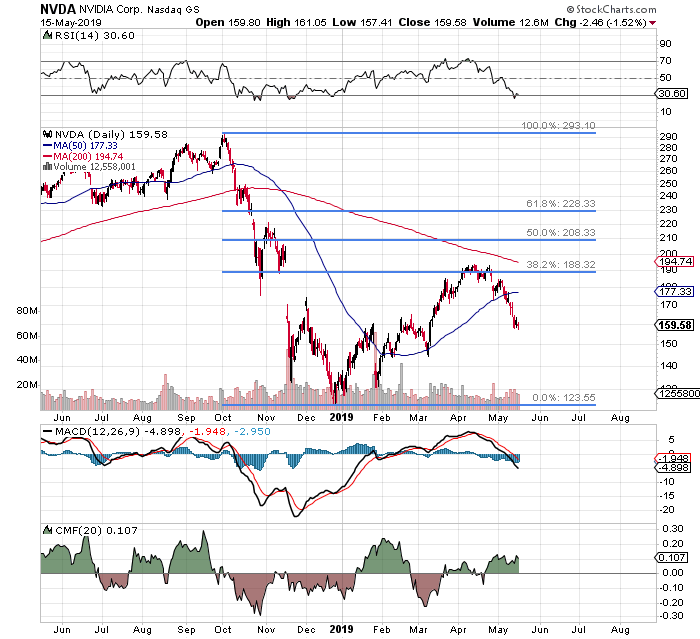 Wow. Traders who rely on Fibonacci modeling sure made out well here. Options markets pricing in a significant move tonight. A one contract $160 straddle expiring this Friday will run the volatility trader more than $12, or $1200 as of last night. This means that the shares would have to close on Friday below $148 or above $172 just to make that play a wash. Not worth it for me. The trader may have to go out on a limb, and do something directional in nature.

I ma not yet sure if I am playing this one. A lot depends on which way the wind blows over the next eight hours or so. Here is an example of how a bullish trader mighty go about this trade in a risk averse way, as opposed to simply putting out the cash for some equity exposure.

In order to further reduce cash outlay, but with increased exposure to potential equity risk the same trader might...

(Cisco and Nvidia are holdings in Jim Cramer's Action Alerts PLUS member club. Want to be alerted before Jim Cramer buys or sells CSCO or NVDA? Learn more now.)

Get an email alert each time I write an article for Real Money. Click the "+Follow" next to my byline to this article.
TAGS: Earnings | Investing | Markets | Options | Stocks | Technical Analysis | Trading | Treasury Bonds | China

Reasons to Invest in Waste Management Are Piling Up

At least according to the charts, which show continuing strong performance from WM.