Why Can't We Be Friends?

Peanut Butter and Jelly. Batman and Robin. So simple. So good by themselves. So much better together. They were set to tear each other down. Apple (AAPL) CEO Tim Cook. Qualcomm (QCOM) CEO Steven Mollenkopf. Cage match. Why not talk it out. In the end, after years of lawsuits, and counter-suits, in the end, that's exactly what they did.

I was on the road at the time. Mired in traffic on the Brooklyn-Queens Expressway. Radio on. Liz Claman of the Fox Business Network suddenly gets more serious. "We have breaking news, folks." Wow. Did we ever. QCOM shares acted as if they had been shot out of a cannon. Incomplete headlines started leaking. The two firms had agreed to dismiss all litigation worldwide in a settlement deal resultant in a payment of undisclosed size to be made by Apple to Qualcomm. In addition, there would be a six year licensing agreement, retroactive to April 1st that comes complete with not one, but two one year options. Oh, Qualcomm will also supply Apple with 5G capable chips for the firm's mobile devices for years to come.

Qualcomm had been tough to own for more than a month. The stock ran 23% in about an hour into Tuesday's closing bell. Then the stock ran another 13% overnight to trade at levels not seen since tech heads worried about potential data failures related to Y2K. Just wow. There's not a lot of short interest, so this is not a squeeze. This is a reaction to what will certainly be a better environment for earnings without legal risk. Turns out that Qualcomm has filed that it now expects incremental EPS of a rough $2 as product shipments ramp.

On television this morning, Steve Mollenkopf, while appearing pleased to resume working together with Apple, declined to disclose just what Apple had agreed to pay Qualcomm in this settlement.

What you want to know is what to do with the stocks. Myself? I came in flat QCOM. So, that a blank canvas. I am long AAPL, and I have a $240 price target there. When I increased that price target, I cited the credit card, and the evolution of healthcare as an Apple business line. The fact that this deal will ease Apple's transition from 4G mobile to 5G mobile is a positive for Apple, as is the removal of this legal risk. I am comfortable with that position. See you in two weeks for earnings.

Now, QCOM is a horse of a different color. This is a positive, no doubt. Let's not forget that QCOM, prior to the trade war had exposure to that nation that amounted to roughly 63% of total revenue. You get a trade deal, QCOM will likely see another pop. 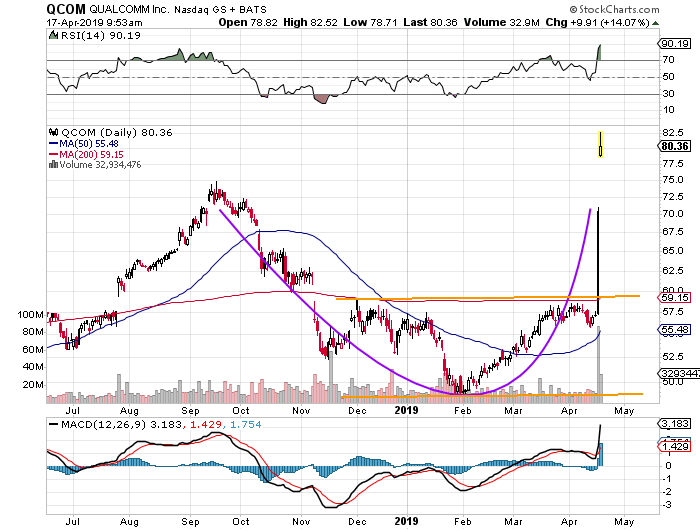 What I saw a a flat base (orange lines) only yesterday, now looks more like a cup with no handle that has already experienced a breakout. Do we even see a handle form? If we do, that would fill the gap. My thought is not to let it get that far. I think I start spending around $76 if we were even lucky enough to see that price. As for those of you that did have the foresight to own this stock, my target price would probably be up around $90 or $91 if I was in the name.

Get an email alert each time I write an article for Real Money. Click the "+Follow" next to my byline to this article.
TAGS: Investing | Markets | Options | Stocks | Technical Analysis | Trading | Stock of the Day